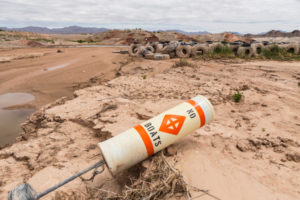 A different approach to the salt threat was championed by Jerry Brown, who was the governor from 1975 to 1983, and again from 2011 to 2019. In his first stint, the state legislature approved a plan to build the Peripheral Canal, a longer and bigger version of the Delta Cross Channel, to divert some Sacramento River water around the outside of the Delta’s eastern edge. In 1982, voters killed the plan in a veto referendum, and the canal was never constructed. In his final term, Brown proposed a similar idea—to move water not around the Delta but under it, through a pair of earthquake-resistant concrete tunnels. (Pat Mulroy told me that a tunnel was essential, when I spoke with her in 2014.) The two-tunnel idea attracted strong opposition, from environmentalists, from Delta farmers, from taxpayers, from others. A scaled-down, one-tunnel idea hasn’t gone much further.    KEY WORD(s): GEOENGINEERING; TRANSPORTING WATER

One of many arguments made by environmentalists against tunnels in the Delta is that building and operating them would harm endemic species. The best known is the Delta smelt—a tiny, slender, iridescent fish that lives there and nowhere else—which was abundant until the early eighties. In 1993, based on data that Moyle had compiled, the U.S. Fish and Wildlife Service listed the Delta smelt as threatened, and since then extraordinary amounts of money have been spent to preserve it, and equally extraordinary amounts have been spent on campaigns devoted to publicizing its preservation. Those campaigns have been created not just by environmental groups but also by the enemies of environmental groups—which, in a perverse way, are also heavily invested in its continued survival, because efforts to save it have been such an easy target for derision. (In 2009, at a hearing, the Republican Congressman George Radanovich referred to it as a “worthless little worm.”) All of that may change soon, since growing evidence suggests that the Delta smelt is now effectively extinct in the wild.    KEY WORD(s): GEOENGINEERING; ENDANGERED WILDLIFE

Every Delta-related water issue has been complicated by the ongoing Western drought. (Tree-ring analysis shows the past two decades were the driest in more than a thousand years.) Under ideal circumstances, surface water and groundwater are complementary resources: in dry years, increased groundwater pumping makes up for the lower surface flows, while in wet years heavy precipitation allows subterranean aquifers to recharge. But the drought has changed all that, by stressing all resources at once. It has also hugely increased the challenge of maintaining water quality in the Delta hub. As less water flows down the Sacramento from the north, controlling salinity inevitably requires reducing exports to farmers in the south. Those farmers, who are the biggest users of Delta water, feel forced, in turn, to pump more groundwater, which is rapidly becoming as scarce as snowpack in the mountains. (Parts of the San Joaquin Valley have sunk more than islands in the Delta.) Every problem makes every other problem worse.    KEY WORD(s): GEOENGINEERING; TRANSPORTING WATER; DROUGHT; LAND SUBSIDENCE

People who don’t know much about water tend to suggest the same handful of remedies for California’s difficulties. One is to build a big pipeline from Oregon or Washington. (“Wouldn’t have to be that big,” Donald Trump told me during a telephone conversation, in 2015. “A lot of water would come down, I can tell you that. They have nothing but water.”) Another is desalination. (During the same conversation, Trump said, “Or you could do something with the sea, with the—what do they call it?”) Another is to prevent the Sacramento and other rivers from reaching the ocean. (In a speech to farmers in Fresno in 2016, Trump ridiculed environmentalists for “taking the water and shoving it out to sea.”) Another is to build new reservoirs or enlarge existing ones. (In a speech in 2020, Trump promised “a lot of water, a lot of dam, a lot of everything,” in part via a proposal to raise Shasta Dam, at the top of the Sacramento’s watershed, by eighteen and a half feet.)    KEY WORD(s): GEOENGINEERING; WATER DEPLETION; WETLAND DEPLETION; WATER VULNERABILITY

Moving water over mountain ranges involves a huge amount of disruptive infrastructure, including reservoirs, pumping stations, tunnels, and hundreds of miles of aqueducts—and anything like the pipeline Trump proposed would require not only many billions of dollars in federal and state funding but also the support of voters in two, if not three, states. The largest ocean-water desalination plant in the country is in Carlsbad, California. (It supplies drinking water to part of San Diego County.) Desalination is energy-intensive; replacing Delta water entirely with desalinated ocean water would require the construction of many dozens of Carlsbad-size plants, plus enough new power generation to supply them.     KEY WORD(s): GEOENGINEERING; WATER DEPLETION; WATER VULNERABILITY

Trump isn’t the only politician who has ever believed that allowing rivers to flow into oceans is stupid. Herbert Hoover, in 1926, said, “Every drop of water that runs to the sea without yielding its full commercial returns to the nation is an economic waste.” Human needs aside, coastal ecosystems depend on inflows of fresh water. A good example is the Sea of Cortez, at the northern end of the Gulf of California. It’s the natural outlet of the Colorado River, but the Colorado is so overdrawn that it has reached it only once in the past two decades, and even then only in a relative trickle. The Colorado’s natural delta, in northern Mexico, which used to be a two-million-acre wetland, is now almost entirely a desert.    KEY WORD(s): GEOENGINEERING; WATER VULNERABILITY

In March, the Environmental Protection Agency approved $2.2 billion in financing for a new off-stream reservoir about seventy miles from Sacramento. The stated purpose of the project—which was first proposed in the nineteen-eighties—is to store Sacramento River water during wet years and release it during dry ones. Even if the reservoir gets built, it’s unlikely to change much. As I heard Lund say to someone else, “There are fifteen hundred reservoirs in California right now. If you build a new one, you will be building it in the fifteen-hundred-and-first best location.” A better, cheaper idea might be to store water in the ground, by recharging depleted aquifers, a technique that southern Nevada and Arizona have used successfully for years—but you can’t store water you don’t have. The real problem in California and the rest of the West isn’t a shortage of water storage; it’s a shortage of water.    KEY WORD(s): GEOENGINEERING; WATER DEPLETION; AQUIFERS

One morning in Sacramento, I had breakfast at the downtown Holiday Inn with Michael George, whose title is Delta watermaster. His position was created by the state legislature in 2009, as part of the Delta Reform Act—which doesn’t appear to have reformed much yet—and he’s now in the fourth year of his second four-year term. His responsibility, according to a state Web site, is “overseeing the day-to-day administration of water rights,” a job for which he was prepared by all his previous occupations: water lawyer, water-company C.E.O., public-utility executive, investment banker, college guest lecturer. His principal function as watermaster, though, has usually been as a mediator and facilitator. “The biggest shortage in the water system in California is trust,” he told me.    KEY WORD(s): WATER VULNERABILITY; CLIMATE POLITICS

George believes that, because of the water issues, there’s no alternative to fallowing large amounts of farmland in the San Joaquin Valley. Urbanites will have to cut back, too—the vegetation that most Angelenos think of as the natural flora of their delightful region, including the palm and citrus trees, is both irrigation-dependent and non-native—but the only way to make truly meaningful reductions is to limit water use by agriculture.     KEY WORD(s): CLIMATE POLITICS; FARMLAND DEPLETION

If that happens, it would be hard on farming communities (and on those of us who, at least occasionally, try to eat the way Michael Pollan and Alice Waters say we should), but the monetary impact within the state would be smaller than most people might guess, since agriculture accounts for no more than about two per cent of California’s economy. George also believes that conservationists need to be realistic about which Delta species can be saved and which can’t, and that salmon, for example, are better candidates for preservation than smelt. In other words, any credible plan for the Delta will entail significant losses by all parties, the nonhuman ones included.    KEY WORD(s): WATER VULNERABILITY; FARMLAND DEPLETION; FOOD VULNERABILITY; ENDANGERED WILDLIFE

All of these notions provoke angry reactions in one quarter or another, and none of them is easy to build a public campaign around. But George, when he talks about them, sounds almost optimistic. “Nobody believes in durable solutions,” he told me. “And I think that’s great because as soon as you conclude that there’s no silver bullet, and that no one thing that will save you, then maybe you will be willing to negotiate temporary solutions with people you hate and have hated for generations. Because, unless you can get together with those people, everyone is cooked.”    KEY WORD(s): CLIMATE POLITICS; GLOBAL CONUNDRUMS

During a drive along the southern and eastern parts of the Delta, I saw a house whose owners had created a terraced garden and sitting area by digging into the levee directly outside their back door—a potentially catastrophic home improvement, and not just for them. After breakfast with me, George was going to look into a similar issue, at the edge of a mostly middle-class suburb called the Pocket, five miles from downtown. The Pocket lies directly across the Sacramento from the northwestern tip of the Delta, and the river semi-encircles it. It’s especially vulnerable to flooding, because the shortest path from upstream to downstream during high water is through the neighborhoods. A group of homeless people had built an encampment by digging into the side of the levee facing the river. In any flood, the encampment would be washed away, and, because of the weakened levee, the houses on the inland side would be in danger, too. (Every problem makes every other problem worse.) George, who had first noticed the encampment from his boat, was going to investigate, and try to explain.    KEY WORD(s): GLOBAL CONUNDRUMS

The Fixy Populist: Tune in next week for a new topic