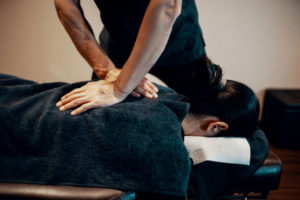 My layman’s understanding of chiropractic began seventy-seven years ago. I was eight years old.

The intervening decades are best understood as a sequential story, during which I received a non-conventional up-front bolus of knowledge about natural ways to stay healthy, and then spent the rest of my life refining my understanding of that original download. The word “download” of course didn’t exist in those pre-digital days, but that initial push led me early on to a view of life and healthful living that is utterly pragmatic, fairly spiritual, and decidedly non-allopathic. I find my own story uniquely interesting, and often feel compelled to place some of it before others just in case it might land before someone it can help. Perhaps it will in some way serve you too.

For no apparent reason I started having headaches. They seemed to come mostly in the afternoon, around the time our small prairie grade school turned us out. These headaches were not merely uncomfortable, the sheer pain of them was horrible. My head throbbed. Even my eyes felt pained by afternoon sunlight through the school bus windows. By the time the bus reached my house I felt so bad that my stomach often added nausea to the silent torment going on inside my head.

I recall many such times, climbing down from the bus, crossing the road and shuffling up the front walk. I wanted nothing more than to go straight to my room, close the doors and blinds, and lie on my back in silence until the abject suffering faded after an hour or three. I remember my sister innocently opening the door and leaning in to ask how I was doing. I remember pleading that the daylight coming through the door made the headache worse the and the sound of her voice in my ears added to the pain. And it was literally true—light hurt my head, sound hurt my head, and both compounded the misery of this latest headache filling everything from neck to cranium.

It of course did not occur to me to perceive any potential correlation between these headaches and previous incidents when, in various childhood situations, I nearly knocked my brains out—e.g., rising up hard under an oak table, tripping over a tree root, et cetera). Why would it? I’d never heard of chiropractic, much less the integral interrelationship of nerves, spine and organs. And I might never have heard but for lucky coincidence.

Needless to say, my parents were concerned. Polio was an ever-present threat in those pre-Salk days and it often began, we had heard some say, with headaches. My mother especially worried, because our local doctor—a general practitioner, or “GP” as they were called in those days—had assured her he could find no reason for my headaches and it clearly was not polio as I had already survived months longer than polio would have allowed. This kind, grandfatherly old country doctor, approaching retirement and surely well behind the cutting-edge medical knowledge of those days, likewise told my mother he had no idea why she had begun suffering chronic sinus infections and attendant headaches. Yet she continued having them, one after another.

At the 1945 standard thirty-five miles per hour she drove our 1936 Chevy the eighteen long miles to Vincennes, the metropolis of our small prairie orbit, to consult “a specialist”—some kind of super-doctor in our limited understanding of such expertise. He asked a lot of questions, performed the usual superficialities, and regretfully told us he too could see no reason for my headaches or her sinus problems. Home we went morosely, our only seeming options reduced to two:  continue suffering indefinitely or maybe die.

A neighbor asked my mother if she’d tried a chiropractor yet. She had not—what’s a chiropractor? With I’ll-try-anything attitude prevailing, an appointment was immediately made and in mere days we headed back to Vincennes. Our education in an entirely new world of understanding health and health care began as soon as we were ushered in.

He was an older man, a bit brusque of manner but unthreatening. I don’t remember his name, but I clearly recall him introducing us to the novel idea that bones getting out of place in our spinal column could cause harmful effects elsewhere in our bodies. This was applicable for headaches and sinus problems, he told us, especially if the misaligned bones happened to be in one’s neck where delicate movable vertebrae must hold up the heavy head—up to twelve pounds in an adult.

My maiden voyage went thus. With most of my clothes off, he laid me face down on his odd-looking adjustment table, poked his forefinger all around my backbone, and then gave selective thrusts at various places along my spine. He paid special attention to my neck, his fingers poking around while he gazed off into space—a diagnostic custom I would later come to know as “palpating.” He always ended by “adjusting” my neck—an unsettling experience the first time one receives it, but only the first time. The various adjustments he used were called, he said, the Palmer method of chiropractic. The afternoon following those first adjustments I did not get a headache.

Even at the tender age of eight years, this wholly new subject made perfect sense to me from the start—at least geographically, given that my neck lay so close nearby my headaches. I had previously noticed my neck feeling hot and achy along with the headaches, and this squared with a device he called a calorimeter which, he told me, showed excessive heat when he ran it up my neck. Like an electrical short circuit, he explained, the heat indicated “blockage” of nerve function.

But what really focused my attention was this: He got results. After two adjustments over two days I definitely noticed an improved “feeling” in my head and neck. And after two years of progressive suffering, hope was restored. One feature of his treatment regimen I especially liked was his insistence that the patient should lie quietly for a few minutes after the adjustment to let it “take.” He had three tiny roomlets curtained off with cots and pillows, and I’m certain it was a good idea. To this day I like to quietly lay there at least a minute following any manipulation of my neck. I think modern chiros who thrust and roust you up immediately are missing their own boat.

There were two drawbacks. We got better but we didn’t get well—headaches and sinus were diminished but they didn’t stop. Moreover, this fellow’s neck adjustments were fairly assertive—some would say just short of violent. In anxious anticipation of his impending wrench to my neck, I couldn’t stop myself from tensing up—which of course interfered with the effectiveness of his adjustments. He was not a large man, and over the years I would come to notice that small-framed chiropractors have to work harder to move bones than comes more easily to the big-framed ones. My mother and I agreed that chiropractic offered promise for what ailed us. We also agreed that maybe we should try another chiropractor.

And so I met the good man Vince Lambert, a dedicated healer of large frame and understated manner. He would coincidentally turn my chiropractic self education in altogether new directions. Under his capable care my headaches and my mother’s sinus misery got better, went away, and finally did not return—so long as we kept our necks straight. At age eight I learned about health maintenance, much as I would one day learn the good sense in regular oil changes for one’s car.

For three years and more we went to his office at two-to-six-week intervals. And it was there that I attained my first deep understandings of what chiropractic is and why it works. They remain with me still, better than ever now. Many times throughout my long lifetime I have tried to share this precious understanding with obviously suffering people who obviously need it. Sometimes I succeed, but more often alas I only find how closed are so many addled minds to the simple, practical, holistic logic of the spine…

I was quite a knockabout child. One incident I still recall with dreadful clarity involved riding bareback astride a grown horse, racing full tilt down a gravel country road chasing a milk truck—and quite unaware that the horse would follow his usual habit of swerving left into an alfalfa field…which left me plunging ahead through thin air toward a very large dead tree trunk now serving as a huge corner post. I was not killed only because someone had thoughtfully wrapped a hundred yards of woven wire fence around that tree-post. The wire wraparounds cushioned the impact and saved my life, though I was knocked silly and wandered in the unreality of shock for about ten minutes.

Such childhood misadventures included an inordinate amount of banging my head into things—repeatedly knocking my atlas and axis askew. This in turn had obstructed the normal flow of bodily energy through that crucial atlas-axis chokepoint in the narrow neck between brain and rest-of-body—and thereby caused my headaches.  If one simply adjusts those vertebrae back into their proper alignment—and keeps them there awhile—voila, health and happiness are restored.