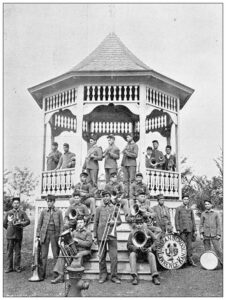 I had another lucid dream early this morning. It occurred during the pre-dawn hours, a time when my body often enjoys deeply restful sleep and, upon awakening, hours seem to have passed in a flash. Pre-dawn also seems to be the part of night when most of my lucid dreams “come” to me.

It was the first such new dream in fifteen years, the latest in a lifelong series—a dozen or so of them in all. Already it stands apart, strong in memory, so unlike those gauzy dream-like little snippets that on most nights flit into and right back out of unconscious consciousness as I sleep, signifying nothing that might register meaningfully in memory. I think this one, like those few other big ones accumulated over 85 years now, is probably significant.

In the dream I see an elongated commercial-type room with a high ceiling, perhaps twenty feet in width by forty in length. My point of observation is elevated—I see the room from about ceiling level; I seem to hover slightly above and outside it just right of center. I see the whole room, its back end to my left, its door and storefront to my right. If there’s a near wall or ceiling I am seeing right through them as if they weren’t there. The room is white overall and is quite brightly lit, lots of light. It somewhat reminds me of a barber shop, though it is not that.

Three young adults are in the room. They are standing side-by-side just left of the room’s center, facing my way. Two seem male, one seems female. Their faces are indistinct, but I specifically notice that they are all young, probably still in their twenties. I understand that they are all professionals—I feel they may be doctors, or perhaps some other kind of trained health care professionals. They work in this room—this is their place of occupation, whatever it is they do. I observe that they all look bright, alert, capable.

Then comes the dream’s only action. Before my eyes, the color of everything in the whole scene becomes more intense. In four or five seconds beginning to end, the room, its sparse furnishings, the three young people, their clothing, the very light itself—everything goes through a “densening” phase during which all colors take on a substantially deeper, darker, more vivid intensity. Everything in the entire scene becomes significantly more vivid.

For the first time I consciously notice that the dominant colors throughout the room are black and white. All colors in the room undergo the change, but black and white are clearly dominant—other colors, such as their clothing, seem incidental. The change is dramatic. Only after it has happened do I realize how pale, how pastel and un-intense it had all been before the change—and I had not noticed that paleness, that absence of intensity, until it changed before my eyes.

Simultaneous with the changing of colors another thing happens: Two more young people seem to “just appear” in the room. I think perhaps they entered the front door and walked over to stand beside the first three, unnoticed by me while I was focused on the intensifying colors. Now there are five of them, these bright young professionals, all standing side-by-side facing my way in deeply vivid color. They seem so ready-to-go:  their staffing is complete, they are now open for business. Their readiness and competence are prominent features of my awareness of them.

And then comes the best part of all. As my dreaming self beholds and “feels” this dramatic intensifying by capable, competent young people, there enters my mind, in full force, a brassy, assertive melody that sounds as if the entire Glenn Miller band were there, giving it their all:

STRIKE UP THE BAND!!!

That’s it. There the dream ended. Straightaway I awoke—my mind full of Strike Up The Band! It’s one of the nicest dreams I’ve ever experienced. For those who might not know, Strike Up The Band was a 1927 musical with lyrics and music by George and Ira Gershwin, whom I love.

Two things come to mind concerning this new lucid dream—probably my last, this time around.

They give me hope. So did this latest dream, to which the unfolding news seems so relevant.