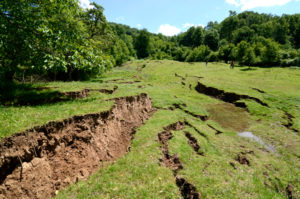 All of that began to change in 1848, when a carpenter who was helping to build a sawmill for a Swiss immigrant named John Sutter noticed something glittering in the mill’s tailrace: the beginning of the California gold rush. An emergent mining technique involved shovelling gravel and dirt into an open-ended trough, called a sluice box, then running water over it. Gold is so dense that it settles into riffles in the bottoms of the sluice boxes as the lighter material is washed away. Miners soon realized that they could get rich quicker if they built bigger troughs and increased the volume and speed of the water. They diverted mountain streams into wooden flumes and broad pipes, then used canvas hoses with iron nozzles to aim the resulting water jets at entire hillsides. That technique was called hydraulic mining. The water jets were so powerful that, according to contemporary reports, they could kill people standing two hundred feet away. Samuel Bowles, an influential New England newspaperman (who was also a friend of Emily Dickinson’s and an early reader of her poems), visited the Sierra foothills in the eighteen-sixties. “Tornado, flood, earthquake and volcano combined could hardly make greater havoc, spread wider ruin and wreck, than are to be seen everywhere in the path of the larger gold-washing operations,” he wrote. Hundreds of millions of tons of sediment were pushed downstream, burying some farmland as far away as the Delta.    KEY WORD(s): SOIL DEPLETION

As significant as the gold rush, in terms of the physical and cultural transformation of California, was the passage, by Congress, of the Swamp Land Act of 1850. One of its purposes was to facilitate the conversion of Florida’s Everglades into arable land, but its provisions also applied to several other states, California among them. As frustrated forty-niners gave up on gold, they often turned to agriculture. Speculators acquired large wetland tracts, then built levees, drained marshes, and cut or burned existing vegetation. They grew potatoes, beans, corn, asparagus, cabbages, and other row crops, and riverboats carried their produce to market. They cut down so many trees, partly to provide fuel for the riverboats, that the only real surviving remnant of the region’s ancient forests is the name of the city at the eastern end of the Bay Bridge: Oakland. The enterprise was made possible by the immigration of laborers from China and, beginning in the late nineteenth century, by the use of steam-powered dredges. The modern Delta was born then.    KEY WORD(s): WETLAND DEPLETION; FOREST DEPLETION

Two days before our picnic at Bethany Reservoir, Jay Lund and I spent most of the afternoon on waterways near the Delta’s southwestern tip, in a boat owned by William Fleenor, an engineer and emeritus senior researcher at the Center for Watershed Sciences. Fleenor’s boat is fifty feet long and has a catamaran hull. We set out from the Pittsburg Marina, near the place where the Sacramento and the San Joaquin flow together. (The San Joaquin arises in mountains near Yosemite National Park, runs northward in the Central Valley, and enters the Delta from the south.) We headed up the mainstem of the Sacramento, and were soon passed by the Atlantis Discovery, a six-hundred-and-ten-foot-long bulk carrier, which was going the other way. I learned later, from a ship-tracking Web site, that it had left South Korea a month before, had unloaded cargo in West Sacramento, and was now heading back toward the Golden Gate. We gave it a wide berth.

The wind blew hard during our boat ride, as it often does in the Delta—one of California’s largest assemblages of wind turbines was just to our west, in the Montezuma Hills—so we spent most of the trip inside the boat’s enclosed bridge, snacking on grapes that Lund had brought and on chocolate cookies that Fleenor’s wife had made. The bridge’s windows were high enough that I could look over the levee of Sherman Island and see the difference in elevation between its subsided fields and the level of the river. Fleenor said that the truly unnerving view is the one you get when you stand in a subsided field and watch a ship like the Atlantis Discovery going by above your head.    KEY WORD(s): LAND SUBSIDENCE; PEAT; GEOENGINEERING

Soil in the Delta has a high peat content. That’s a result of the steady accumulation, throughout thousands of years, of dead wetland vegetation—largely bulrushes called tules, which once flourished throughout the area. As the Pacific rose with the melting of the northern ice sheet, the tule marshes rose with it, and the underlying layer of submerged dead plant material thickened, creating a stratum of what is really a juvenile fossil fuel. (Peat in the Delta sometimes catches fire and burns underground.) Plowing exposes the peat to air, causing it to oxidize, and as it oxidizes, the land shrinks. Peat also compacts easily, and, when it dries, the Delta winds can blow it away. Some island fields have been sinking at an average rate of more than an inch and a half a year since the eighteen-hundreds.    KEY WORD(s): PEAT; LAND SUBSIDENCE

Almost all the islands in the Delta have flooded at one time or another. A few are still submerged, making the Delta jigsaw puzzle appear, from above, to be missing several pieces: Big Break, which was an asparagus farm until 1928; Franks Tract, which flooded in 1937 and 1938; Mildred Island, which flooded in 1983; most of Liberty Island, which flooded in 1998. There have been many close calls. In 1980, workers on Jones Tract, a twelve-thousand acre island in the southeastern Delta, were enlarging a levee by dredging sediment from the adjacent waterway and piling it on top. “The extra weight crushed the peat foundation, and it slowly sank and failed,” Greg Gartrell, a hydraulic engineer and an adjunct fellow at the Public Policy Institute of California, told me in an e-mail. Water rushing through the breach threatened the Mokelumne Aqueduct, which carries drinking water across the Delta to one and a half million residents of San Francisco’s East Bay. The torrent would have swept away piers supporting the aqueduct had a passing train on the island railroad not gone off its tracks and partly plugged the gap.    KEY WORD(s): PEAT; LAND SUBSIDENCE; GEOENGINEERING

A different levee failure on Jones Tract drenched the entire island in 2004. Dealing with that break was complicated by the kinds of conflicts that, for decades, have derailed efforts to address climate change and other environmental threats. Because the Jones Tract levee was “non-project”—meaning that it wasn’t part of a federal flood-control program and hadn’t been built under federal supervision—the Army Corps of Engineers could not help until they had received a formal request. By then, the fields were underwater. The Corps eventually did help to rebuild part of the levee, citing the need to protect State Route 4, which skirts the island, but the repair was done with dredged material that turned out to be contaminated by toxic metals. At the time, California’s Department of Water Resources believed the flooding might have been confined to just half of the island, but the Burlington Northern Santa Fe Railroad refused its request to block an opening under a trestle. Drying out Jones Tract took months and cost an estimated ninety million dollars, lawsuits not included.    KEY WORD(s): LEVEES; GEOENGINEERING; CORPS OF ENGINEERS

That Jones Tract failure occurred not during an earthquake or a torrential rainstorm but on an otherwise ordinary day in early June—an unsettling thought. Rising seas will cause the Delta’s waterways to press harder against the levees, and the continued sinking of the fields will make them more vulnerable. A number of levees have been raised or reinforced in recent years, but many haven’t, and no single regulatory body is responsible for all of them.     KEY WORD(s): LEVEES; FLOODING; SALTWATER INTRUSION; LAND SUBSIDENCE

A perennial challenge to effective planning in California is that water management is divided among hundreds of jurisdictions, from the federal government down. There are so many agencies, overlapping constituencies, interest groups, and simmering historical antagonisms that implementing comprehensive remedies to the biggest problems has, so far, proved to be impossible, even as those same problems have grown more dire. Farmers in the Delta sometimes worry that farmers in the San Joaquin Valley and homeowners in Los Angeles are out to screw them, and vice versa. Politicians act as though they hope disaster will hold off until the day after they’ve left office. In 2011, a report published by the Public Policy Institute offered a grim diagnosis: “The result is often a game of ‘chicken,’ where the management of a declining resource becomes deadlocked.” Lund, who co-wrote that report, told me, “Everybody is watching this thing decay, but nobody wants to be the first to offer a compromise, because that weakens their negotiating position.” The ocean, meanwhile, continues to rise, and the fields continue to sink.    KEY WORD(s): WATER DISTRIBUTION; JURISDICTIONS

The Delta’s main defense against saltwater intrusion has always been the Sacramento River. Throughout the decades, waterways among the islands have been channelized, diverted, and, on occasion, partially blocked, in order to make them more effective both as salt impediments and as freshwater conveyances. During our boat ride, we saw a temporary salt barrier, which the state’s Department of Water Resources had placed across the West False River, an eight-hundred-foot-wide channel. The barrier was a small dam, made of stone, whose purpose was to impede the flow of ocean water into canals that carry water to the south, for irrigation and domestic use. The greatest danger had passed, and the D.W.R. had recently removed the center of the barrier. I also visited the Delta Cross Channel, a mile-long diversion canal on the east side of the Delta, built in 1951. A dam-like structure at its mouth has gates that can be closed during floods, to reduce the likelihood that salty water will reach the pumping stations.    KEY WORD(s): LAND SUBSIDENCE; GEOENGINEERING; SALTWATER INTRUSION

Many other defenses have been tried or proposed. In 1929, John Reber, an actor, screenwriter, and theatre producer, suggested building two immense dams across San Francisco Bay, roughly where the Bay Bridge and the Richmond-San Rafael Bridge are today, to disconnect the Sacramento almost entirely from the Pacific Ocean. Reber wasn’t an engineer; in fact, he hadn’t gone to college. But he was an avid amateur hydrologist and an effective promoter.     KEY WORD(s): GEOENGINEERING

In 1950, Congress appropriated two and a half million dollars to study his and other ideas, and the Army Corps of Engineers built a functioning scale model of the entire region. The model, which was completed in 1957, still exists. I went to see it, at the Bay Model Visitor Center, in Sausalito. It consists of two hundred and eighty-six concrete sections weighing five tons each, and it covers about two acres, inside a warehouse in which liberty ships were outfitted during the Second World War. It still has working tides, which turn more than a dozen times an hour. Linda Holm, the park ranger who showed me the model, said that tests conducted by the corps of 1engineers in the early sixties proved that the Reber Plan, if implemented, would have caused “flooding of Biblical proportions” and doomed the Delta’s salmon, among other species, by blocking their migration to and from the ocean.    KEY WORD(s): GEOENGINEERING