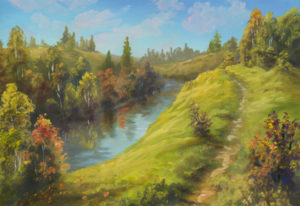 [Mayme Bull enters and casually walks to downstage center. Spotlight stays on her.  For 8-10 seconds she simply stands, looking about the audience – feet together, hands together across her waist.  She speaks mildly:]

If that seemingly cannot be avoided, I’m sorry … though I suppose it is unavoidable.  I guess by now you’ve noticed the obvious, that the story of Paul Sawyier is also the story of Mayme Bull.  It seems it is not possible to tell Paul’s story without revealing my story too.  Our life stories have been interwoven to such measure that neither would be complete…or even true…without the other.

I wonder what Paul’s story would have been without me in it… [pause]  I’ve thought a bit about that…    Something tells me…     …I just have a feeling his life might be pretty much the same, regardless whether I was in it or not.

I wonder what my story would have been like without Paul in it.  Now there’s a thought!  My story wouldn’t be pretty much the same at all!  No, not a bit of it!  I wouldn’t be me, I’d be someone else.

I’d probably have been a mother six or ten times by now!  Toddlers running around… some growing up…a new one at the breast.  Like my mother!  She had nine – or ten, if you count the first Baby Frank…

Paul’s mother had six…five lived to be grown.  Most of the girls I used I know… women now…have produced big, loving, happy families by the time they’re my age!

That’s what I thought I would do…  But that’s apparently not what the Lord chose for my way.  [looks up]  What is my way, Lord?  I’d sure be grateful if you’d end this uncertainty!  I’m already in my late thirties, heading toward forty.  A bit late to be starting babies!

[ pause; she crosses arms, then raises right hand to chin in characteristic “Mayme gesture” (right fingers folded against chin under her right cheek, as in photos) ]

What I’m starting is to be an old maid!  Like Aunt Mag and Aunt Mary.  Though they’re happy enough…and they do lots of good works.  I’ve often wondered if either of them had their own Paul Sawyier when they were young.  They don’t talk about such things, and I certainly would not dare ask!   [beat]

But back to you, Mister Paul Sawyier.  Will you ever become a famous painter and grow wealthy – as you say you must – so that you can afford to marry me and support me?  If so … when?   Not Mayme Bull, but Mrs. Paul Sawyier!  How patient must I be, Paul?

I have demonstrated my faithful patience, for here I am and we’re into a whole new century, for goodness sake!  I know you have troubles at home, but are you yet more patient than me for our theoretical marriage and life together?… those yet-to-be happy, quiet evenings, shared in a warm home of our own?  And is it truly patience you feel? … or … something else?…

Oh, Paul…Paul!  How shall I describe thee!

[pause]  Now that is an interesting thought!  If I had to choose one word that most nearly sums him up…what might it be?  [she thinks]

Yes, I think that might do.  If he’s not absent off somewhere in the woods or down by the creek, he’s thinking.  And when he’s thinking, he’s absent then too.

Oh, I can go with him, on his constant treks into the brambles and briars.  But if he takes his easel and watercolors – which is almost always – I know he’s going to be concentrating on painting in a way that’s pretty close to absent.  While we’re “down by the creek” I can spend my time reading, or writing, or I can keep up one side of a waning conversation.  Watching him paint is a rather pale embrace.  Even if he’s just fishing, he says I must speak very softly, if at all – so I won’t “scare the fish away”  …he says…

[pause]   He often tells me he loves me…  [pause]  …and I suppose he does … in his way…  But he has this other love — the one who takes over when the brush is in his hand, and his eye is filled with the colors of nature, as only he can see.  And without meaning to…he leaves me … and he goes into himself, and he gives his whole being to this other love.  And he is absent from me…     Absent…

[Spotlight fades as lights come up on Scene One.]

October 1905, Paul’s studio with HG Mattern.  Paul sits painting as in famous photo, Mayme stands nearby.  He continues painting as they talk.

Paul                 Yes.  We can’t make him stay in bed all the time, and we can’t keep him from getting wild.  If things keep going downhill I’m going to need someone to stay with him around the clock. That means I’ll have to ask my sisters to help pay for it.  And that means I’ll have to go into detail three times, with all three of them, on exactly how much worse he’s gotten.  They’re not here all the time like I am, to see how he just gets worse, day by day.  Losing a little more of his mind every day…   It just wears me down.

Mayme           I’m so sorry, Paul.  Mama is despondent too.  She’s never recovered from daddy’s death last January.  I don’t think even she knew how much she depended on him.  Sam Bull senior was a very central solid rock in all our lives.

Mayme           You are doing what you must do, Paul.  So am I…   I’m happy that little pleasures brighten Mama’s life a bit.  My brother John’s baby boy turned two this past August.  He’s a busybutt little fellow and Mama delights in him.  And all my cousins seem to keep having babies.  She loves it when they bring the babies to visit her.

Mayme         After a whole year?  Exhibiting in a world’s fair must surely be a good way to gain recognition.

Mayme           I should think people in Frankfort would still be giving you acclaim over the wonderful portraits you’ve turned out in recent years.  A lot of people like that one of your grandfather Wingate…  And the one of Uncle Jo Waters…

Paul                 Maybe so, but I’m so tired of portraits.  My true calling is landscapes and waterscapes.  Especially in that soft impressionist style.  That’s where my heart is!

Mayme           That’s fine, your impressionist watercolors are wonderful and people like them too.  But you don’t have to give up portraits.  Dollar for dollar, you earn a lot more for each portrait you do.

Paul                 We have discussed this before!  A true artist has to follow his deepest artistic urges.  Portraits are holding me back.  The time I have to spend on one portrait would turn out four or five views of Benson Creek, or…

Mayme           [a little exasperated]           Paul, would you actually choose to give up solid, good-paying portraits to paint landscapes because you think people will buy them when you get famous? Can you earn a living that way?  It need not be either-or.  You can do both!  It’s so easy for people to walk into this studio and get their portrait done!

[Mattern enters carrying a camera of the period]

Mary               Mister Mattern, a photographer is an artist. Do you favor portraits or landscapes? Which sells better for you?

Mattern          Mayme, most people who walk in my door want a photograph of their face to grace somebody else’s wall or piano.  But me – I’ll photograph anything that sells!.  Paul, go back to painting, just the way you were.  Let’s have a photo of you for posterity!  We’ll call it “the late great Paul Sawyier at age 40!”

[They all laugh.  Mattern aims camera at Paul who resumes painting as in “that famous photo.”  Lights fade]