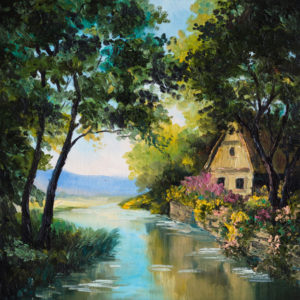 Russell            I’ve had the experience.  Glad it happens only once.  I meant to stay with you after the funeral.  Somebody stopped me for a minute and when I looked up you were gone, just that quick.

Paul                 This year started bad and got worse.  I think from last Christmas – no, before that – early December, when Papa left…   From then till right now has got to be the worst time I’ll ever live through in this life!  Sending Papa off to that mental hospital was the hardest thing I’ve ever done.  I just know it made Mama die sooner than she should have.

Russell            Don’t be hard on yourself, Paul.  He was bedfast. You couldn’t have taken care of him no matter how hard you tried.  As I recall, your live-in helper had quit too!

Paul                 She said Papa was too wild.  He couldn’t even get out of bed, but she quit!  Regardless, I wish I hadn’t let Eastern Hospital take him till after Christmas.  From the day they took Papa to Lexington in early December, Mama went into deep mourning and never came out.  After she wrote her will in February it seemed like she just shut down…

Russell            Your father had to have hospital care.  There was no choice left. Who pays his hospital bill – you or the State?

Russell            You did what had to be done, Paul.  You stayed home and took care of them through thick and thin for years.  There were no daughters around to do it!  My concern at this point is for you.  Where are you going to stay?  Will you evict some of your renters out of the Broadway house so you can move back in there?

Russell            It’ll keep food on your table.  But I was wondering where your table will be.  You’ll have to move out of this parsonage now, won’t you?

Russell            It was your mother the church invited to move in here.  Because her mother had donated the money that built this parsonage. You and your dad were just part of the package.  With her gone, and Nat permanently in the hospital…

Russell            Of course you can!  I’ll help you find it!  There’s always several houseboats tied up along the riverbank down here.  I’ll bet we can find one for sale!

Paul                 I need money!  I’ll have a sale!  I’ll sell every stick of furniture here!  The dishes!  No, better keep a couple of dishes.  Oh, I thought I’d never feel this free again!  Russell, my parents are gone!  I don’t need all this stuff!  My sisters won’t leave town till Mama’s will is read. I’ll tell them to take anything they want and I’ll sell the rest!

Paul                 I don’t know.  I figure it’s not my place to be talking about such things.  They’ll find out soon enough.  Anyway, Mama left me a list of certain things she specifically wanted to go to them and the grandkids.  I’m ready to get on with life!  Just think, Russell!  For years I’ve been yearning to live on the river. Now I’m going to make it happen!    [pause]    I wonder what Mary will say about this!

[Lights down, back up on Paul and his three sisters seated, facing an attorney who reads aloud:]

Attorney         I, Ellen W. Sawyier, make this my last will and testament.  First:  After the payment of my just debts and funeral expenses, I desire that any income on sum derived from the sale or rent of my house, No. 224 Broadway, be held in trust by my son Paul Sawyier for the maintenance and support of my husband, Dr. N.J. Sawyier, and I empower him with authority to sell said real estate and reinvest the proceeds thereof as in his judgement may seem best. Second: In the event of the death of my husband N.J. Sawyier, I bequeath said real estate, or which may remain of the proceeds thereof in case of a sale, to my son Paul. Third: I give and bequeath all my personal property of every kind to my son Paul, but I wish and direct him to distribute certain bequeaths to children, grand-children and a few friends in accordance with a written memorandum which I have placed in his hands. Fourth: I hereby appoint my son Paul Sawyier sole executor without bond of this my last will and testament. Ellen W.Sawyier, this 29th day of February, 1908.

[Three tight-lipped daughters look back and forth at each other;  Lights down]