[June 9, 1923, Frankfort Cemetery.  Many people are gathered near a gravesite.]

Governor Morrow                  The hunter comes home from the hills. The sailor comes home from the sea.  And on this day, June the ninth, 1923 – five and one-half years after his death in a far off place – the body of Paul Sawyier has come home for the long sleep in the land of his birth.  He rests at last in the encircling arms of the hills, at the bend of the sweeping river that he loved.  Cliffs of Kentucky – your friend,  one who felt your solemn grandeur and your deathless beauty – has come back to you.  Old River! – on whose broad bosom he floated through canyon and palisade;  who knew you best because he loved you most;  and whose genius has preserved on canvas your beauty forever – he will send his tiny craft over your waves no more at daybreak, or twilight’s hour of mystery and rest… but he will sleep the sweeter because he can hear the sound of your waters.

Paul Sawyier – poet, artist, genius, loving son of the hills and woods and streams of Kentucky.  The Commonwealth receives his remains to rest forever in its soil with love and pride.  Another worthy son of Kentucky sleeps here in our own Westminster Abbey – the silent city of the dead overlooking our Capitol. He reproduced scenes of the everyday, all around about us, but the colors came from a palette resting on a loving breast.  And were inspired by the cunning touch of a hand dedicated to bringing to, and giving to, for all, the beauty with which God so richly blessed our state.  Home at last, the soil of the land that he loved most will rest softly upon all that remains of him, who greatly loved… and beautifully wrought… for Kentucky.        Edwin P. Morrow, Governor of Kentucky

Tom Wallace              Paul Sawyier truly was an artist.  As such he belongs to Kentucky.  His fitting resting place is here in Frankfort Cemetery – Kentucky’s Westminster Abbey – here amid the scenes… surpassingly beautiful… that inspired the brush of the painter, and were dear to the heart of the man.”                Tom Wallace, a friend of Paul Sawyier

Tribute #1 (Woman)           The great love of his life was applying to canvas the beautiful things of nature through the softened mystery of impressionist painting. The soft and beautiful colors of his paintings are so peaceful.

Tribute #2 (Woman)      He gave us beloved images of Frankfort, as they are… no longer. Paul Sawyier captured and perpetuated our sylvan waterways and rolling countryside in delicate, yet vivid, colors of similar gentleness and charm.

Tribute #3 (Man)          He does not sleep, but is at peace among his hills and valleys. And he lives at last in that fuller love that he so longed for.  He will never die in the hearts of us who love more the things around us, for seeing them… as he saw them.

Tribute #4 (Woman)     Painter of Two Villages, he has moved forever from that sweet old village, down below, to this eternal village, here… high on the hill.  Above the river. 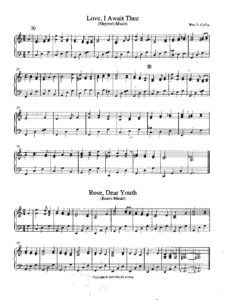 Note:  42* of the 61 characters appear once or infrequently and may play multiple roles.

Last Half of Mayme’s Music (letter B through end)