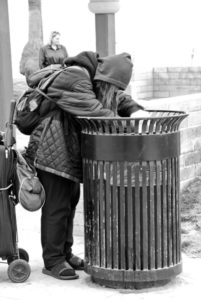 The problem begins with the staples of human subsistence – i.e., food, clothing and shelter. Every human needs a basic supply of these simply to stay alive. Anyone doubting it may try going one week in January without food, warm clothing or a roof overhead.

The corporation which sells basic food, clothing or shelter is in an inherently controlling position, especially if its position is monopolistic as corporations selling life basics tend to be. Corporate heads know their customers must have food, clothing and shelter, and their employees must keep a job simply to afford their own food, clothing and shelter. Thus, looking in both directions at once, this situation presents manifold advantages for maximizing corporate profits—charge the customers high and pay the employees low. That’s why the corporation exists—to sell high and pay low, to maximize profit.

If you want to become very, very rich, go out and capture a large share of the market for those subsistence commodities that human beings must have in order to maintain life: food, clothing and shelter. How much would you pay for a glass of water if your canteen were empty in the middle of the Sahara? And what is the best device for capturing a large, perhaps monopolistic, share of any market?

Charter and operate a corporation. People figured that out a long time ago.

All this talk about the corporate part of the problem is necessary simply because it is so un-talked about in daily discourse. The situation is rather like the air we breathe—it’s constantly all around us, vitally affecting our lives and taken for granted, but how often do you hear people talking about air? How often do you hear them talking about corporations as the root cause of all the things now going wrong in our formerly great American economy?

At base, the idea is nothing more than recognition that by teaming up and cooperating, people can implement desirable projects bigger than any one person could handle alone, whether it be herding bison over a cliff (free meat) or building a new bridge from which all will mutually benefit (easier travel).

Stepped up one level of complexity, if the completed project can itself produce revenue, such as tolls charged to cross the bridge, it may result in new “free” income for all who contributed a share of the original cost. There have always been reasonable incentives to form corporations—and temptations to use them to exploit the masses of common people for personal enrichment.

Roman times. The term “corporation” derives from the Latin corpus meaning “body.” Early on the Romans applied it in this sense to cities and, later, to community organizations such as artisan associations, social clubs and religious societies where larger community interests were served. As the concept evolved, as all concepts do, private contractors came to associate themselves into ad hoc corporation equivalents called publicani, whereby to pool their resources in order to bid on public functions for the Roman state, such as collecting taxes, building aqueducts and constructing temples.

Of great interest here:  in earliest times these proto-corporations, whatever they were called, were subject to the public interest. They were created with intent to serve the greater public good, e.g., building hospitals, universities, roads and bridges. Their chartering documents typically spelled out their duties and public service obligations.

They often were to be overseen by some public authority, and straying outside their charter for personal enrichment was punishable by law. Nonetheless, history records an endless succession of corporations overreaching their intended bounds, inevitably causing such turmoil that the state is forced to rein them back in and regulate their behavior. Of some significance, we may note that the Roman laws to punish abuse of corporate charters would not have come into existence if some Roman corporations were not already committing abuses. Indeed, the history of abuses by corporations is so very old we may reasonably conclude that abuse is intrinsic to the corporate form of enterprise per se.

The Roman publicani further evolved, as things always do, into more permanent associations with many investors—eventually becoming large, powerful and rich enough to employ hundreds of workers and spread across the Roman provinces. Some even attained limited liability under authority of the Roman state, which sheds new perspective on how long this handy device for avoiding full responsibility for one’s actions has been around. Many of the investors, being wealthy to start with, were of course well connected and wielded influence in Rome where collusion with government officials became indistinguishable from routine business. Thus the precursor model of modern for-profit corporations was launched.

Around the same time, incidentally, non-profit charitable corporations also came into being in attempts to serve (cope with) Rome’s large and growing indigent population that you never hear about. Let it be noted that the Roman state lasted in all a thousand years whereas our American states united are yet far from completing only our third century—much less coping with the very real human needs of our growing indigent population.

Middle ages. Under tenets of Roman law that survived as Church canon law, cities, universities, monasteries and guilds became incorporated—now under certification by religious authorities or various royalty and nobility. These too largely served public functions intended to benefit the public interest at large. Nothing resembling the Roman publicani would again emerge for a long, long time, but even Europe’s dark ages never fully extinguished the corporate idea. It lay semi-dormant until about 1600 when competitors arose to challenge the passing commercial dominance of Spain and Portugal.

Even in those Iberian kingdoms, the idea had to be re-learned. Thus:  if a group of  people, each having some extra money laid by, hatched the idea of sending a ship to the New World to wrest gold from the natives, they could pool—i.e., “invest” —their monies to fund the cost of a ship, crew, muskets and powder—a significant cost which no one of them could afford alone.

They all knew that if the venture survived the risks of shipwreck and possibly violent resistance by the natives who owned the gold, then the investors were likely to become enriched far beyond the cost of their initial investment. Then if the voyage in fact succeeded, they would all be eager to do it again and become yet vastly more enriched without having to work for it, or even inconvenienced from their daily rounds. But alas, there was always some unavoidable risk:  if the ship sank or the natives won, their investments would be forfeit.

Such is the lot of corporate stockholders in all historical periods—in the end what they do is not altogether unlike the roulette wheel. A lot of people love the corporate adrenalin rush, just like in casinos. You’ll either win or you won’t. Fifty-fifty odds—right?

Thus despite the risks, investing in corporate shares with intent to gain profit without having to work for it became an incentive in and of itself. The incentive remained true even—sometimes especially—in cases where the corporation gained its profit not by producing useful objects to sell but merely by exploiting others out of their existing wealth. The Spanish and Portuguese had set the trend, developing the idea to a fine art with their gold-seeking exigencies in the New Worlds of North and South America.

Coincidentally, in the Year of Our Lord 1502 one Juan de Córdoba of Seville became the first known merchant to ship an African slave to the New World to work for free. No one remembers the slave’s name, only Córdoba’s.

Transporting African slaves to the Americas escalated when in 1510 Spain’s King Ferdinand authorized fifty to be shipped from Africa to Santo Domingo where they would provide free labor for the new Spanish-owned sugarcane plantations which had displaced and worn out the island’s native people, all now perished.

This labor-cost-cutting idea took hold. Within a decade four thousand African slaves were “imported” westward to “New Spain” under authority of Charles V, the Most Holy and Sovereign Ruler of the Spanish Empire, Holy Roman Empire and Habsburg Netherlands. For a very long time thereafter, the slave trade grew every year, sometimes with holy endorsement, often without.

Profit-minded Dutch businessmen, enthusiastically abetted by English privateers (robbers who moved about by sailing ship) with whom they shared mutually high focus on putting an end to Iberian dominance over foreign exploitations, greatly refined the corporate concept and its endless iterations in places like Manhattan Island and South Africa.

Soon realizing the great profit and wealth to be had by stealing the natural resources of distant peoples—especially when costs for the necessary labor could be rendered so very low—the French, Belgians, Italians, Germans and other enterprising Europeans sent troops to take control over most tribal-cultural areas throughout Africa, the Middle East and Asia. Thereby was launched the great heyday of worldwide imperialism and its long-memoried legacy of revengeful problems and strife not excluding the terrorism and refugee migrations broadly with us today.

The exploitive model favored by all of these (except the displaced Iberians whose sophistication never went beyond the brute-force conqueror model) was the corporation—or other organized endeavor that looked very much like a corporation—because it so effectively organized people to do work and produce profit. In those early corporate heydays profits underwent unprecedented growth as markets expanded explosively because prices were held down by low labor costs resulting from explosive growth of slavery. Times were good for corporate stockholders who could afford shares.

In time the highly profit-minded British excelled beyond all others and exercised control over so very many foreign territories and their plenteous natural resources that the sun never set on the British Empire, as they used to say. Early on, the British jewel in this respect had been the American colonies to which England—uniquely among nations—sent its own citizens to colonize and work the land as residents. This arrangement quite unintentionally gave the British-American colonists something to lose, thus creating in them a new and independent mindset which was not overly long in coming to the fore.

Most profitably, the mother country required the colonists to ship their raw materials to England, where English workers paid slave wages processed them into manufactured finished goods such as pots and pans and axes, which were then shipped back to America where the colonists could buy, at marked-up retail, these little life necessities they were not permitted to manufacture for themselves. Sound familiar?

Any American colonists caught making finished products for themselves were punished and their facilities destroyed. Though you don’t hear nearly so much about the “economic” causes of the American Revolution as about the “political” causes, the similarity to today’s arrangements whereby American workers are rendered unemployed when their jobs are shipped overseas to slave-wage countries will be apparent to the reader who has not fallen asleep. May we just observe in passing that economic arrangements of this one-sided nature tend to make revolutions fairly inevitable.

After the exasperated American colonists in high ill temper eventually separated themselves from their one-sided financial arrangements with merry old England, the British soon refocused their attentions on the large geographic area today known as India, Pakistan and Bengladesh—very rich in natural resources—and proclaimed it the jewel in the British crown.

Capitalism is the system, the corporation is the vehicle. The vehicle for stealing this eastern jewel’s great wealth and shipping it home to England was a super-corporation arrangement, which modern mega-corporations can only envy, called… (To be continued)