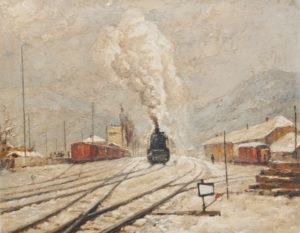 Paul                 Hi.  Are you still up for canoeing down the river?  I’d like to capture the colors around Benson Creek before the afternoon light starts changing.

Mayme           I suppose so.  Before we leave, though, I must unpack this basket lunch I fixed for us.  You had said you’d come by mid-morning.

Paul                 Uh…afraid not, dear.  I’m almost out of pastels and new ones will cost most of what I made.  I’m determined to go strictly cash with LeCompte for my supplies these days.  Go ahead and undo the basket.  There’s still time for a nice afternoon outing.

Mayme           And babies.  You should just count all the babies!  Like my Averill cousins.  Mary and Thomas and Marvin, they all have babies now.  Rebecca doesn’t. She’s still unmarried.  Like me.  She’s my eldest cousin, you know.

Mayme           Of course I missed you.  And we both missed a lovely dance at Woodburn.  It’s been a while since we went dancing, Paul.  You always seem to be gone up Elkhorn Creek these days. Will you stay with the Bristow family again?

Paul                 No, don’t want to wear out my welcome.  Dick Baker invited me to stay with him on my next trip.  He’ll take a painting of Elkhorn Creek behind his house in trade for my lodging and meals.

[she looks away; there is an awkward moment of silence]

Mayme           Maybe you should go on without me, Paul.  Mama’s not feeling very well.  She may need me.  I rather feel like staying in today anyway.

[He kisses her.  She watches him exit.  Lights fade]

[March 1897, the Sawyier family home on Broadway.   Paul paints at an easel.  His mother Ellen sits looking at miscellaneous papers.  Father Nathaniel paces distractedly in and out of the room.]

[Nathaniel comes to door beside Paul]

Deputy            On behalf of the court and the sheriff I hereby serve you with this summons.   [he hands folded papers to Paul and Nathaniel, turns and leaves]

[Nat and Paul stand staring at the papers]

One of you please tell me what is going on?

[he sits down, arms tightly folded across his waist, rocking slightly]

Nat                  We’ve had to cut costs…lay off workers…cut salaries…  All the officers took big pay cuts.  You can’t pay normal salaries if you’re not making normal sales!  And I wanted our daughters to have beautiful weddings they’d always remember!

Nat                  [agitated]   About two years ago I went to the bank and told them I needed fifty five hundred dollars.  The mill was barely bringing in enough money to keep us going, I tell you!  The U.S. economy was just terrible everywhere!  I had spent every reserve I had just to pay our household bills! I figured a six-month note would tide me over the worst of it… till sales picked up again.  The officers at the bank were oh so very helpful. Took me in a private office. Treated me like a prince.  They set it up to be paid back that November.  But…when the note came due…I…just didn’t have it.

Nat                  Ellen, banks don’t just lend money because they trust you.  They require you to put up collateral.  Something that’s worth money, in other words, that they can take… if they have to…

Ellen                Nathaniel, if you were so short on money that you had to borrow some… then what sort of collateral did you have that you were able to put up?

Nat                  [calmer, still agitated]    When the note came due I went in and asked for a little more time.  Then… several weeks went by and… I couldn’t even pay the interest.  Ellen, I was broke!  After all these years!  This late in life!  Can you imagine how I felt?  They said I could have more time if I’d get two co-signers for the overdue interest.  Natalie was still here, so in December I asked her and Paul to be my co-signers.

Nat                  Ellen, I had to talk with the bank.  Even with the extension I was still overdue. These people wanted some real cash paid on the loan. They acted so understanding.  Said they knew I was good for it.  Deceitful hypocrites!  But I simply had no cash left after paying our basic bills here at home.  By last summer I was out of cash even for that, because our sales had still not picked up!  I tell you, things were pretty desperate at the mill. So last July I offered the bank another ten shares as collateral if they’d loan me another four hundred.  They finally agreed to that, and…

Ellen                Paul, you wouldn’t know this, but when your grandmother was living she put in her will that she was leaving this house to me.

Ellen                You don’t understand the law, Paul.  If this lawsuit against your father had come up just three years ago, they would have seized this house even though it was in my name, not his. The law would have let them treat my property as if it was my husband’s property.  They could have thrown us out of our own home, and sold the house to pay off your father’s overdue loan.

Ellen                You know your grandfather Wingate was a lawyer.  A good one, too.  He taught my mother a thing or two along the way.  That’s why she willed this house to me, not to your father and me together – just me, in my name alone… just in case.

Ellen                Just in case the state legislature might do what was only being talked about at the time.  And they did in fact change the law three years ago.  I remember the very day Governor John Y. Brown signed the bill.  It gave wives control over their own real estate and personal property – for the first time ever!.  Before that, everything a woman owned – or brought into a marriage – was legally owned by her husband.  She had no property tights at all.  Until they finally changed that old stupid law.

Ellen                Why would you?  You were all caught up in your own affairs.  Young people always are.  The new law – it also gives wives a full one-half interest in their husbands’ property.  It legalized fairness!    [pause]    But…if the bank takes away our stocks in the mill… why there won’t be any stocks left for me to own one-half of!  That’s the only income security we had!  What are we going to do?

[she stops speaking  as Nat enters reading a paper]

Nat      [sighing; he sits]        The market is still depressed.  Our shares, right now today, are not worth the five thousand dollar value they had when I took out the loan.  I watch the stock market every day.  Praying it will go up. Even if the court gives them my collateral, I’ll still owe a big piece of the damn loan.  And I have nothing left to pay it with!

I wonder what Mary would say…