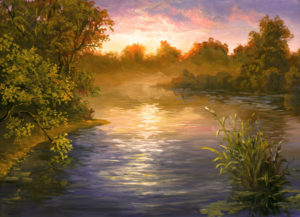 Judge              Sanford Goin – starting right after the War Between the States, on his own initiative – planted maple trees all over this fair city so that the future residents – like you – might have some shade.  And the anniversary to which I refer is the murder of our dear late Governor Goebel!  It was just one year ago the end of this month that Brother Goebel was shot down in cold blood, just down the street from where we sit this very minute!

[ticks off points on his fingers]

Judge              Come to that, Leo, think how Frankfort might turn out if we hadn’t had the Citizens Im-provement Association to clean up the Craw!

Dan                 Haw!  West end of Mero Street ain’t ever gonna be the same!  Y’all hear about that survey the Women’s Club got up?  Said things down in the Craw was even worse than they suspected!

Judge              Not that civilized, John.  Governor says he thinks Frankfort citizens aren’t safe since them six soldiers was murdered in that dance hall.

Leo                  I can’t say about the Army, but I do know they got that do-good lady from Chicago down here to give do-good ad-vice about how they cleaned up Chicago’s version of Craw.  Then after Judge Hazelrigg got his self elected presi-dent of the Association, they went lookin’ for money to spend on the Craw, and one Baptist lady gave five hunderd dollars!  You know how they spent it?

Judge              Any change at all in that end of town would have to be for the better.  I hear Rebecca Averill is startin’ a kindergarten up in Craw.  Get them kids off the street.

Dan                 She’ll get whatever wanders in off the street. I heard her little cousin Cordelia Bull has been hired to teach up at Leestown Mission School.  Poor little thing’ll have to go right through Craw every day to get to work!

Dan                 I see Paul get out as he can and paint pictures around town to try to sell. Street scenes close to home, y’know.  He don’t go out of town much these days, not even very far from home.  His mother’s crippled, and I hear his daddy is getting real hard to handle.

Judge              He was visitin’ one of his daughters lives up in Pennsylvania now — Mary Campbell, I think — and left out of there on a train, supposed to be goin’ to visit his oldest daughter, Lillian, up in New York.  But he never got there, see.

Judge              There was some concern maybe he’d been murdered.  Police from here to New York was all on the lookout.  His daughters’ husbands spent prob’ly two fortunes hirin’ detectives and all.  His travel trunk turned up as unclaimed baggage in New York. Then somebody found his watch at a pawn shop in Cincinnati, and that’s where they finally found him.  Checked into a hotel and layin’ up in grand style big as you please!  So home he was brought to the parsonage and that’s where he’s bein’ well watched now.

Dan                 Not any more.  With Nat down, their financial distress has got to be pretty common knowledge in Frankfort. You might know Miz Sawyier’s mother had donated the money to built that parsonage behind the Baptist church.  Well, last year they got so bad off, the church offered them the parsonage to live in, and they accepted.  Don’t think they had a lot of choice, because it meant they could at least have a steady income by renting out their big house on Broadway. And that monthly rent is pretty much what they’re living on now…except when Paul’s paintings bring in a little here and there.  Maybe the daughters help some, I don’t know

Judge              I heard Ellen started out sellin’ baked goods every day, try to earn a few pathetic little dollars. Poor thing.  But then Nat was hollerin’ in the middle of the night, she got up to go tend to him, fell over a chair and broke her hip.  Now I hear they’ve had to hire help to come in for both her and Nat, because Paul can’t stay there every minute twenty four hours a day!  I can’t imagine how they’re getting’ by. It’s quite a come down.

Judge              You’all remember a few weeks ago when the court ordered the sheriff to carry out judgement in the bank’s lawsuit against Nat?  For six thousand dollars?

Judge              Well the whole town don’t know this one.  At least not yet.  This past September Nat walked into another bank – right here in this same town! – and borrowed another two thousand!

Judge              [rubs fingers together]       Collateral!  Thirty seven shares of stock in Kentucky River Mills.  Y’ get it?  Repayment due in ninety days, or else turn over the stocks.  Seems like Nat had some more shares all hid away that he didn’t tell anybody about.  Not the bank that’s suing him, not the court, for all I know not even his wife.  But there it is.  He brought forth some more stocks and walked ‘em right down to the National Bank, where they was only too glad to pawn ‘em for two thousand dollars.

[Paul enters through side door]

John                Politicians!  Rumor is they’re getting up a bill in the Senate that would put a luxury tax on gold and silver jewelry!  They’d run me out of business!

Paul                 Nobody’s going to run Selbert’s Jewelry out of business, John.  That big clock outside your store will still be keeping time a hundred years from now.

Paul                 Probably the one upstairs over John Todd’s new confectionary store, up by the bridge.  The paper said, quote, “Not only was there a big crowd of visitors with compliments galore, but a number of private sales were made to those charmed with his reproductions of nature as found in Frankfort’s environs.”

Paul                 Artists need to know what’s being said about them.  Any of you seen my other exhibitions?  I have one in the Capitol Trust building.  Another in Frank Stagg’s Hardware.  I’m doing almost all impressionist watercolors now, you know.

Paul                 Most certainly not.  Some European artists have applied impressionism to portraits, but I like it best for landscapes and water scenes.  I’m getting a little tired of portraits anyway.  I love putting that soft impressionist touch on places like Elkhorn Creek.  Or the streets here in Frankfort.

Paul                 Oh, yes!  I spent some time on a series of paintings that illustrate Rose Terry Cooke’s poem, the one she called “The Two Villages” – about the cemetery up on a hill, and the town down below the hill.  I did those as presents for Mary.  One of my watercolors took first place at the Lexington Fair this past summer!  And, I’ve stayed pretty busy in my new studio at Mattern’s.

John                I remember seeing that in the paper.  Said your studio is the scene of “many Bo-hemian gatherings!”  Said you prefer the company of a few friends to the “noisy pleasures of the town.”  Kinda made me wonder!

Paul                 They can print as they please in the papers.  I’m just glad to have my own studio in a public place again.  The last time was fifteen years ago in Cincinnati!  It helps that H.G. Mattern has been doing his photography there for years.  People expect fine art work to be at that location.