Rock and roll music and every last one of its vile iterations and derivatives of every nature, which in their ubiquitous aggregate long ago initiated and have long since guaranteed the inevitable decline and ruin of the once-great United States and most of the surrounding civilization, such as but most certainly not limited to Bill Haley and the Comets rock, hard rock, acid rock, punk rock, so-called adult rock, misnamed soft rock, rap, blap, crap and all other associated rhythmic noise invariably and disproportionately featuring way too damn much drum, the concept of lovely melody being replaced by looping, mindlessly repetitive and meaningless notational phrases composed by incompetent non-composers in substitution for real melodies such as Minuet in G, Mighty Like a Rose and The Sound of Music, all being accompanied by screechingly bizarre alleged harmony overlaid onto exaggeratedly, insanely raucous electric bass guitar and incomprehensible lyrics variously screamed and grunted out by profusely sweating permanently non-maturable pseudo-adults clad appropriate for the Roman games and in full seizure of pulsating, thrusting tribute to the most base, primal, bestial aspects of their dualistic animal-spiritual nature, the whole being emitted at ten thousand (10,000) blasting goddam decibels through speakers the size of Volkswagens turned up to deafening full crank, are hereby abolished pursuant to the spiritual advancement of humankind and a lasting memorial to the author of these words. Have a swell day.

2. Second thing: the advertising problem and a solution to it 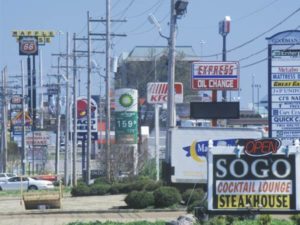 The markets in fact serve our wants and desires, not our intrinsic needs. To be more precise, markets prod people to want things that they do not really need. The more we consume, the more we are flooded with things we can do without. Breaking out of this vicious circle is hard, because the system is rigged in favor of powerful corporate interests that place short-term profits above human well-being.

Plain English for the Voting Citizen: 1) Congress intends to halt the great United States’ degrading descent into a cacophonous quagmire of advertising in, on and around every last American from birth to death. The good life does not require and in fact abhors the incessant din of advertising, which has been totally out of civilized bounds for decades now and keeps getting worse.

The Congressional blather version:  With these four measures it is the intent of Congress to restore a measure of dignity and civility to U.S. life and commerce, and to the appearance of ad-cluttered buildings, roadsides and all other commons in the United States, on behalf of individual citizens unceasingly distracted by ubiquitous persuasions to spend their money on things they had not planned to spend it on, and of impressionable children who from birth are bombarded by thousands of advertising and marketing persuasions every day of their lives.

While preserving consumer ability to use modern internet technology to easily and quickly compare competitive prices for similar products, to the benefit of the common good of the nation and a grateful populace, Congress specifically intends that roadside billboards, tobacco signs on barns and beverage signs on windows, digital pop-ups on computer screens, radio and TV commercials including Superbowl insanity, brand-name blimps above fairgrounds, brands printed on shoes, bellies, clothing and hats, bumper stickers, political ads and other unwelcome telephone solicitations from unknown, unwanted  and deceptive solicitors at suppertime, neon-lighted cacophonies surrounding Times Square and the Las Vegas strip at great cost and waste of otherwise useful electrical energy, and ads personally targeting individuals based on intrusive analysis of their private purchase records, among the multitudinous other forms of advertising and marketing everywhere on U.S. soil and in tattoos and in the very ether surrounding us, shall be hereafter consigned permanently and comprehensively back to that hell from which they sprang.

Plain English for the Voting Citizen: 1) In-your-face advertising is dead in the USA and good riddance praise God.

The Congressional blather version:  Advertising is hereby abolished in the United States. Ads of every type and description whatsoever, including but not limited to visual, audible, electronic and subliminally manifested ads, are hereby declared illegal and shall be eliminated within ninety (90) days after enactment of this legislation. Any co-op or other enterprise commanding less than five percent (5%) of its primary market segment(s) shall retain the privilege to list, at its option, its goods and/or services in yellow pages and/or to post its products and their prices in detail on its web site and in its front window if it has one. The proactive behavior known as “marketing,” being a subordinate component of the broader overall function known as advertising, thus expressly designed and intended to persuade citizens to spend their living income on objects and activities they might not have otherwise considered as personal priorities in the absence of such insidious, pressured, persuasion to sell you something without care for your wishes or best interests, is coincidentally also abolished and hereby declared a felony. No organization engaged in advertising or marketing may be converted to a co-op. The Department of Labor shall assist those persons whose advertising- and marketing-related jobs are eliminated by abolishment of these activities to develop honest skills and find useful employment.

Plain English for the Voting Citizen: 1) With advertising deep sixed, enterprising co-ops may elect to put competitive price comparisons on their websites for easy reference by folks who like to compare prices before going out to buy something they feel they truly need.

The Congressional blather version:  In the interest of enhancing more complete and genuine free competition, any co-op may elect, as a legitimate business activity under the terms of this legislation, to serve as a clearinghouse to collect and post on its website, for public consultation, the competing prices, including its own prices, for comparable items sold by various co-ops and businesses in a market region, sub-region or municipality, and such activity shall not be deemed advertising. The name and address of every co-op and business listed on such clearinghouse website shall be stated so that a consulting consumer may decide whether saving a buck is worth the cost of driving to a distant seller’s location. Any co-op or other business may post its unembellished name on its storefront or premises, and this too shall not be deemed advertising.

The Pope, I believe, is correct when he argues that a new way of thinking is needed to change the status quo: “If we want to bring about deep change, we need to realize that certain mind-sets really do influence our behavior. Our efforts at education will be inadequate and ineffectual unless we strive to promote a new way of thinking about human beings, life, society and our relationship with nature. Otherwise, the paradigm of consumerism will continue to advance, with the help of the media and the highly effective workings of the market.” Indeed, if we want to transform the world, we need first to transform ourselves.

Plain English for the Voting Citizen: 1) Local governments may levy fines as big as they please on any advertising that hasn’t disappeared after ninety days.

The Congressional blather version:  Local municipal and county jurisdictions are hereby encouraged to levy substantial fines, in whatever amounts they deem suitable, on any and all entities which have not removed and/or ceased all visible, subliminal, audible and/or electronic advertising of every sort beginning ninety (90) days after enactment of this legislation.

Plain English for the Voting Citizen: 1) The CBA will help newspapers and other news media get past the crisis of learning to live without income from endless annoying ads, because making sure our citizens are well informed is necessary if we are to continue having democracy in the USA. The first thing tyrants do is take over the news media.

The Congressional blather version:  Until the nation’s news media normalize the impact of transitions resulting from 1) conversion of all news corporations to employee-owned co-ops, 2) improved financial stability from ending the custom of removing profits, and 3) abolishing  advertising and thus terminating competition for it, all as mandated by this Act, and given that a well informed electorate is essential to democratic government, the Cooperatives Bank of America (CBA) shall assist the transition with loans and financial incentives to newspapers and broadcast media that have come to depend on and represent advertisers more than they represent news. Such CBA assistance to newspapers shall be contingent on their restoring at least the level and quality of news coverage they were offering their readers on January 1, 2000. The Congress encourages commercial radio and television broadcasters to emulate the models of National Public Radio and public television, but, recognizing that many will be unable to bring themselves up to this high standard, acknowledges that there are way too many out there bleating away anyway and a shaking out may unclutter the airwaves to the cultural betterment of all the people.

Essay 9 (Excerpts from Populist Corrections featured elsewhere on this blog).