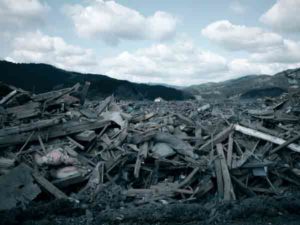 I received another of those lucid dreams in deep-sleep early hours this morning,

July eighteenth in the year 2017, latest in a series. Perhaps it will be the last?

It’s left me sad, the context a good humility reinforcer. But little more.

About a decade since the last, the one that rocked but finally gave me peace,

the dream three hundred years in my future – long traveling then, with others in robes,

in the gondola of that sensible, technologically appropriate, dirigible,

from somewhere in old southeast Ohio to somewhere else in old West Virginny,

across old, old Kent-a-kee so acrophobically far below, maybe a whole quarter mile…

…and re-greened from horizon to horizon, village clearings here and there

a great interstate trace barely noticeable across the trees, but discernible still, yes,

and the great beautiful warm Missippisea but a hundred miles west, salty waters I love, not at all old, the elders say, north-south connecting old Gulfamex to Hutsonbay.

No, this morning’s dream was not three centuries hence, or decades or lives past. No.

It was somewhere in between now and Missippisea, about halfway maybe,

the Great Troubles only just ended.

I stood in a valley surrounded, horseshoe-like, by steep ridged hills

to the northwest and north and northeast and east,

but south I could not see, for it was behind me.

I stood there of two minds, one appalled at the recent Now, the other with future intent,

seeing how it could be, would be, notwithstanding the awful now.

Metaphor so stark my morning is all askew.

I cannot not take the latter first.

Future intent is a mixed bag. My dreaming mind so easily enjoys how it will later be,

like how it was before long ago, when on the steep ridgy hills stood many and tall trees,

They surround, they embrace, they provide deep calm background

surrounding the valley below, the inner horseshoe,

where I intend, I know, to build my house.

Mind’s eye knows it will be beautiful,

against the backdrop of towering dark green grandfather trees on steep ridges.

But that’s not the Now I now see. Here is the metaphor my dream shows me.

Every square foot of ground in sight, everywhere – both ridgy hills and valley floor –

is covered – utterly covered, in debris. I’ve never seen devastation so sad as this.

The grandfather trees are gone utterly.

The debris is the walls of white frame houses, houses that were but are no more.

They are all ripped apart, in pieces as if blown apart, but into whole walls that

white framed walls with broken windows and doors, so many, overlapping on the ground,

so many – scattered, piled, heaped – interspersed too with broken splintered

boards from still more walls that failed to remain intact,

splinters and walls atop all the surrounding hills, and top to bottom on the slopes,

and on the valley floor, not a square inch of its swales and flats uncovered

and loved, mowed lawns, and wandered through ordinary lives

of unremarkable interests large and small,

as if a giant hand held it all far aloft, then just dropped it

I’m not alone. Here and there, among the chaos, a few men move

and they are doing what men always do, cleaning up after the mess others made,

to give up to adversity, which never was necessary in the first place.

As teams and individuals they struggle to clear away the mess of walls and debris.

I see a dozen men grasping a wall, laboring to tug it to one side,

striving to expose the bare ground.

A new beginning by survivors

who will not give up

I know I will momentarily join them, to clear the once-green spot

where I have planned to build my house

Metaphor overwhelms, for I understand what I see.

I’m seeing walls because it enables me to not-see how they got this way. No.

No. Walls don’t fall down, boards don’t splinter, by themselves. No.

Cause and effect. This effect requires explosive cause. Devastating cause.

cause of a size, a scope, a violent intensity defying description.

All over the world. Walls that were houses, now are pieces on the ground,

overlapping in their multitude, white in their innocence, splintered in death.

Walls are death’s metaphor. Mercifully, they enabled me to not-see the bodies.

as they wandered through ordinary lives of unremarkable interests, large and small.

Thank you Spirit for dreamed metaphor – instead of making me see it all.

It’s not hard, really, the futurists will assure you. Just start with the present facts,

and project logically forward to a logical future. You’ll get it mostly right.

We overpopulated, everywhere, and that one gross problem drove all the others.

because of all that vast, gross, burgeoning unstoppable human overpopulating,

spreading to fill every space, sunder every habitat to shrinking islands,

until only human habitat remained over all the world,

and all the little animal habitats shrank to spots.

Then too, were the power mongers, exacerbating, making bad things worse.

We failed to stop them, ever acceding to their greed for profit and wealth and power

and control over others so they could profit still more and be the one percent,

then one tenth of that, then a hundredth. Wealth. Power. Control.

And as their multinational corporations took total control of globalized trade,

eschewing loyalty to any polity, any moderation, any responsibility to anything

they shipped the jobs away, transforming minimum wages to slave wages.

They designed their durables to soon break, thinned their edibles with adulteratives,

manipulated their private equity and investment banks and financial globalization

to take over whole countries then continents then world money markets,

producing, of value, nothing but artificial profit to siphon off

along with the pension funds and capital assets and every possible valuable thing,

They must burn fossil fuels because they’re cheap and cheap is good for business,

and all this false news about global warming and rising seas is bad for profits,

and griping about benevolent trickle-down is bad for trade, don’t we even care?,

while uncaring they pursue business as usual. We let them do it.

As long as we’d allow it, they’d take.

and dependent on a handful of immensely wealthy glitterati who owned it all,

to provide food or clothing or shelter for the billions and billions of people.

So they perished too.

And it wasn’t quick. The prolonged suffering, constant warfare and migrations

began around about 2080 AD, as years are measured after the time of Christ,

or CE as years are measured “common era” by those who care not a fig about Christ,

or 4778 as the ancient Chinese calendar would have it, or 5840 by the Hebrew calendar,

and this went on for more than a century – intensifying, peaking, wearing out – until

it all finally ended one forlorn day when two hating antagonists killed each other.

This, I think, is the Juncture of my dream early this morning.

because the surviving people were so few.

after Missippisea was long in place,

and live at peace

This dream poem is associated with the final chapters of my book Populist Corrections, elsewhere on this blog, which address the years immediately ahead through about 2215, and then end a century later on the pleasant shores of Missippisea.