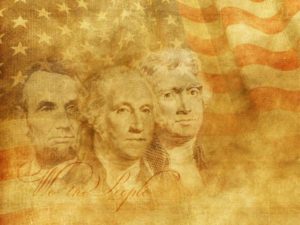 If we Americans simply made all the goods we need to run our own households, we’d have plenty of jobs to replace all those good jobs the corporations have sent overseas. WE COULD DO THIS NOW.

There’s 320 million of us Americans, and rising fast: WE ARE OUR OWN BEST MARKET.

Corporations that send our jobs overseas to “cut labor costs” impoverish Americans who lost those jobs. “Corporate profit” enriches only bosses and stockholders; IT DOES NOT TRICKLE DOWN.

Only big corporations seek vast markets in other countries; for the rest of us it’s all right here at home.

DE-GLOBALIZE:  95% of products needed by American households must be made in the USA.

The American Dream consists of having enough income to buy EIGHT BASICS WE ALL NEED:

1) food for healthful nutrition; 2) clothing for all seasons; 3) shelter including utilities; 4) lifetime health care; 5) dependable transportation; 6) insurance mandated by law; 7) in young adulthood, moderate savings or cost of education, but not both; and 8) in retirement, adequate income.

POLITICAL LIBERTY IS MEANINGLESS IF YOU LACK ENOUGH MONEY TO LIVE ON.

ALL American citizens are entitled to these ECONOMIC RIGHTS – the heart of the American dream.

ALL working Americans are entitled to a LIVING (not minimum) WAGE that can afford these rights.

Henry Ford wisely paid his workers better than the standard get-by wage so they could afford to buy his cars.

We choose capitalism because it’s the best known way to ensure competition that holds prices down. But when it grows anti-competitive it harms us rather than helps us. Capitalism is just an economic system – its delivery vehicles are corporations which naturally serve themselves, not you and me.

THE BIGGER THEY GROW the more they seek to avoid competition by mergers and buyouts.

Solution 1: Limit every business to no more than 5% of the American market for whatever it sells.

Solution 2: Subdivide every corporation that has grown “too big to fail” or exceeds 5% of its market.

Solution 3: Convert them into competing incentive-based worker-owned co-ops throughout the USA.

Solution 4: OUTLAW profits from manipulations that produce nothing of value to the common good.

CO-OPS don’t have to siphon off profits to further enrich the wealthy few. Workers can reinvest surplus money into the co-op’s future, and pay raises and bonuses to themselves – they earned it.

“Simply put, when employees have an ownership stake in their company, they will not ship their own jobs to China to increase their profits, they will be more productive, and they will earn a better living.” -Bernie Sanders

Every American chooses whether to focus on 1) helping others (compassion) or 2) serving oneself (selfishness). Like our Founding Fathers, we’re still all in this together. Like them, to serve All The People, in our nation’s interest, we must pledge anew our lives, our fortunes, and our sacred honor.

THE COMMON GOOD – what’s best for All The People – is uniquely the heart and soul of the USA.

*****Consider these matters at depth in the book POPULIST CORRECTIONS  at  fixypopulist.com   which provides extensive details in the 95 theses of the Capitalist Free Market Corrections Act (CaFMaC)

SHARE THE BLOG:  If you enjoyed this please invite your friends to view