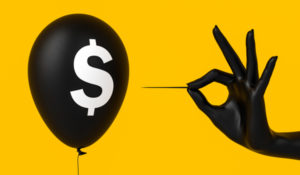 Historical boom and bust in the land of the free

We wasted two hundred years staring at the wrong portrait of ourselves: Homo economicus.

For the enlightenment of citizens in general and economist-tribesmen in particular, the more significant depressions, recessions, panics and awful economic downturns in U.S. history, each preceded by a period of irrationally exuberant speculation driven by greed with intent to attain disproportionate wealth without working for it, are hereby brought to public notice. The Wall Street crash and Great Depression of 1929-1940 and the subprime mortgage and derivatives collapse of 2007-08 are bitter examples—but only examples, for the real problem is of great age and it never stops returning.

The following list of the more significant among such calamities omits numerous other somewhat less significant economic downturns, named and unnamed, which occurred in between those listed, or only in regions comprising less than the entire nation. The late-twentieth century savings and loan crisis is an example of these lesser but still serious events. Each and every one of these lesser economic sags, though “a bit less” disruptive, was accompanied by widespread loss of personal savings, subsistence income, homes, farms and possessions, as well as, of course, the poorly documented human suffering which invariably attends such things. And that’s just the in-between ones not listed here.

The real suffering, a majority of it out of sight and undocumented in any way that would get peoples’ attention, resulted from the big ones—the panics, the bubble crashes, the things we now mostly call “recessions” or “downturns,” avoiding at all costs that unsettling word “depression.” It seems odd how quickly all that suffering gets forgotten, every time, how the indomitable human spirit turns positively then, once again, to the future, buckles down again, and millions try once more to work their way back up out of poverty and duress. Until the next time. While at the same time a relative few uncaring opportunist speculators set about gaming the system all over again, trying to get rich quick without working, keeping the boom and bust cycle forever in motion, exploiting the U.S. free market economy again, and again, and yet again, remarkably, without cease.

Here then—ignoring  those lesser economic crises as well as comparable major ones that regularly occurred during the pre-U.S. colonial period—are listed the United States economy’s more significant depressions, recessions, panics and significant economic downturns through our history to date. Their frequency is of some interest.

The Age of Robber Barons:

– “The Long Depression” of 1873 to 1896 which featured four distinct worsenings:

– The Speculative Real Estate Bubble and Crash of 1926 (interval 19 years).

– The Speculative Bull Market and Great Stock Market Crash of 1929.

1980: Reaganomics.  White House imposition of the simplistic “supply-side,” “trickle-down” mindset, undergirded by the Chicago School of Economics ideology of free trade with unlimited enrichment for corporations coupled with austerity for developing nations and low wages for employees in every country around the world.

Notice that, leaving aside the 1946-1979 interval of unprecedented economic prosperity, the least interval between economic crashes is three years; the longest is twenty-two. For these dozen intervals, representing capitalism at its routine best, the time between market crashes thus is, on average, about 12.5 years. If one further omits the outlying “shortest three” and “longest twenty-two,” the average is about 13.7 years, an inconsequential difference. Thus throughout American history since the nation’s founding, our capitalist economic system has failed us about every twelve to fourteen years, on average…

…except for those few decades when our government kept a tighter rein on corporations and most Americans prospered better, or far better, than ever before.

Notice what’s important here:  There has been only one extended period in United States history when we the people enjoyed sustained prosperity and genuine respite from the ever-recurring recessions, depressions and economic crashes every twelve to fourteen years, on average. That one bright period was the years during which the financial sector was tightly regulated in reaction to 1) the insanely selfish behavior and irrational speculation that had caused the Crash of 1929, 2) the resultant decade of Great Depression and suffering across America, and 3) the immense governmental regulation of economic activities necessitated by the nation’s engagement in World War II as leader and only hope of the free world. That one bright period lasted just thirty-three years—1946 to 1979—before Reagan deregulation started things back downhill. Still, the very inertia of that federally regulated economy held off any more Wall Street crashes until 1987—a full fifty-eight years since the Great Depression.

Let me just note in passing the extraordinary volume of speculation that resumed soon after the 2008 meltdown. In truth, the perpetrators never really stopped. Despite some political rumblings, they remained ineffectively regulated—pretty much the same as effectively unregulated. They bought up tons of the post-2008 repossessed houses for a song, bundled them as exorbitantly priced rental properties, and are to this day selling the bundles as “monetized financial instruments,” most profitably, just as before. Still effectively unregulated, the jerks have arranged to profit a second time on the same houses they caused to be foreclosed after their 2008 debacle. Did you really not know?