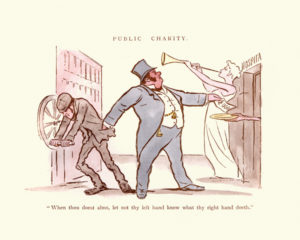 We’ll have to start by defining some terms, of course. Since I get to choose, my choices for starters are “economy,” “ethics,” and “fundamental economic basics” which I hereby declare synonymous with “Economic Rights,” an unfamiliar term in the USA. I see no reason to define “decent life”—anyone needing to define that is reading the wrong book.

Economy (noun):  A planned, designed and well managed social arrangement whereby every person in a society, without exception, is enabled to obtain all basic human needs at a level of adequacy sufficient to function free from want and with dignity in that society. Such basic adequacy must be economic rights in law, and their legal assurance must not preclude individuals advancing their income above the level of basic adequacy if they can manage to do so without in any way causing harm to any other persons. Anyone not understanding these ideas should look up “Maslow’s Hierarchy: first two levels of need.”

Ethics  (plural noun): Taking personal responsibility for causing significant effects in other peoples’ lives.             Discussion:  Two Axial-Age Greeks have had undue ethical influence on modern societies, deservedly or otherwise, given the extraordinary reach we still confer on them over two and a half millennia removed.  Hippocrates, considered the father of medicine, left a legacy of ethical influence when he told doctors: “First of all, do no harm.”

Xenophon, considered the father of economics, left a legacy of ignoring ethics. He believed he knew all about how to manage slaves and women, including the domestic household management and duties he associated with slaves and women, so he never bothered to suggest any ethics to guide what twentieth-century high schools used to call “Home Ec” back in those wise old days of including such non-STEM classes in curricula designed to turn out “educated and well-rounded” student-citizens. That was back before Home Ec and Civics and Chorus and Art Appreciation fell victim to the new curriculum priority on turning out “trained” students to be “human resources” to pair with “natural resources” for the production maw of the corporate-industrial complex. Between being educated and being trained lies a chasm of philosophical proportions.

Fundamental Economic Basics (plural noun phrase):  Also known as Economic Rights, i.e., the economic birthright to which every United States citizen should be entitled by virtue of being born here.  Summary and minimum detail of economic rights follow.

Summary:   1) food; 2) clothing; 3) shelter; 4) health care; 5) dependable transportation; 6) insurance required by law; 7) the cost of education or moderate savings, but not both; and 8) adequate retirement income. Possessing income and wealth above the cost of these adequate Economic Rights is not a right, it is a privilege of being a United States citizen.

Detail:    Notwithstanding any other consideration whatsoever, personal after-tax income shall in all circumstances be sufficient to purchase in adequate measure the eight basic living needs which are Economic Rights for every United States citizen. Entitlement to these eight rights presupposes personal income at a guaranteed level of adequacy not less than the cost of:

Income and wealth attained beyond an adequate measure of these eight necessities of life shall be recognized as privileges, not rights, and such privileged income and wealth may be moderated by taxation accordingly in the common best interests of all the citizens of the United States in mutual aid and support of each other. Recognizing that the costs of obtaining adequate measures of these economic rights vary in different regions and sub-regions of the United States, income tax scales—in consideration of after-tax living income—shall logically correlate with regional and sub-regional living cost differentials for a single taxpayer, and for a spouse and family members as applicable, as annually recalculated by the federal government for each U.S. region and subregion, and such correlations shall be directly reflected in the Adequate Living Wage required by law to be paid to employees in each subregion.

So what do you think, friend, should we choose to help others or serve ourselves? As for me and my house, we choose to help others. That simple expression of love is my purpose. In that way, with a single intent, I serve the brothers and sisters with whom I share the Earth, I serve myself with spiritual growth, and thus I serve God too.  What this Godly Algorithm says about purpose and choices isn’t just some vague foo-foo to titillate spiritual seekers. It’s totally practical. It is one of the few things in the world of ethical or would-be-religious ideas that is directly concerned with whether you can afford the high cost of eating and a place to sleep—in other words, the bare income necessary to live a decent if modest life.

Our job is to open doors. We are all responsible—an awesome responsibility!—to attain the wisdom and discipline to choose, and pursue together, new ways that open doors to economic as well as political freedom for all of us—every last one, singly and together—for, as they say, no man—or woman—is an island. And if you’re not economically secure, pal, you’re not politically free. Paul McCartney said it well: Open the door and let ‘em in. When you open the doors of equality and true economic opportunity, my friend, stand back or you may get trampled, for they’re gonna come flooding through. You didn’t realize how smart they are, how fully they’d respond to being Free At Last, now did you?

We all have choices. Hippocrates or Xenophon—on whose shoulders shall you stand? The Hippocratic Oath embodies an assumption that every person is an intrinsic value to be respected and cared for, and modern physicians claim to do precisely that even when they don’t. In marked contrast, a seemingly anesthetized majority of modern economists start from the opposite end:  Greed is good, the market is self correcting, leave it alone. If the invisible hand happens to turn some people into beggars, blame the victims—they’re lazy Takers who deserve their misfortune for leeching off us noble Makers. In counter-contrast, George DeMartino, an economist-ethicist at the University of Denver, holds that “when a profession seeks influence over others, it necessarily takes on ethical obligations whether it recognizes them or not.” Of economics in particular, he adds, “I’m aware of no other profession that has been so cavalier regarding its responsibilities.” See definition of “Ethics” above.

Some people have the ability to envision a world where justice, fairness, adequacy and peace prevail, and that ability is a curse. To see the vision, or be blind—which is worse?

A small entrepreneurial company employs workers to manufacture pots and pans. It pays its workers a living wage, sells the pots and pans at a reasonable price that earns a reasonable profit, and all concerned have adequacy. A finance company manipulates money to make more money, gets rich, then uses its increased wealth to leverage still more, exponentially increasing wealth thousands of times beyond adequacy, but has at no time produced a single tangible object that would be useful to somebody. Given half a chance, it will impose a leveraged buyout on the small pots-and-pans manufacturer, ship its jobs overseas, strip it of all the assets it can find a buyer for, and declare it bankrupt.

Of the two companies, which one helps others and which serves self? First of all we must redefine that old made-up religious idea of “sin” from its prevailing loosey-goosey usage as “whatever an accuser doesn’t like” to “any action that results in harm to others.”

On the matter of (un)ethical economic wrongs

Reduced to their essence, the systemic failings and wrongs that degrade and sidetrack realization of the incomparably Great American Idea fall into a few broad categories. These are identified in many different ways, of which the most significant are capitalism, poverty, wealth inequality, and corporations grown uncontrollably too big.

Capitalism. The subject here is not “capitalism versus socialism,” or capitalism “versus” anything—the problem is capitalism per se, all by itself. If I may over-enjoy myself by paraphrasing Ronald Reagan, capitalism is the problem. This particular type of economic system we unthinkingly permit to continue—unthinkingly accepting and using it as if capitalism were the only way in the world people could transact everyday buying and selling—has a huge built-in flaw. This capitalist flaw is called boom-and-bust disease. It is a grievous flaw, and it has repeatedly inflicted suffering on our people ever since the nation’s founding two and a half centuries ago. It’s not only grievous and repeated, it is incessant and predictable—we know this suffering will always happen again, not very far down the road, but we keep right on using the same old system in the same old way, expecting better results. Many pundits have reminded us that is a definition of insanity.

At fairly regular intervals—which on average come about every 12-14 years—our capitalistic system crashes, taking down with it millions of peoples’ wealth, their mortgages and their homes, and the comfortable adequate lifestyle they labored so long and diligently to acquire. Not rich, simply adequate—own your own home, save a little for the kids’ college, not have to constantly worry about groceries, rent and the car breaking down. In the wake of every crash the disappointment, grief and suffering are palpable, and many people never make it back up out of their new poverty. It is a regular, repeating, dismal trashing of America’s famous dream, so well known around the world.

Every stock market crash of our capitalistic economic system is caused by those few people, self servers all, who speculate and gamble on stock market price fluctuations. Buy low, sell high. They produce nothing tangibly useful such as pots and pans, but are ever intent on making big money without working for it. After every crash the system gradually recovers, slowly building its way back up to prosperity. Meanwhile the speculators-gamblers-manipulators who invariably cause these crashes go immediately back to their self-serving machinations all over again—until the next time it crashes, again, taking down millions of peoples’ wealth, mortgages and homes with it…

This is fairly stupid, people. Why do we keep allowing it? The cause of this problem is an enormous elephant in the room, way too big and obvious to pretend to keep ignoring. I’m not talking about switching to socialism. Most Americans are biased against European-style socialism—a mild way of assuring fair income security for everybody—because of the horrible reputation of its crazy big brother that used to be Soviet communism. Most Americans harbor this bias because they don’t understand squat about the differences between communism, socialism and capitalism. We’ll fix that a few paragraphs down.

But are we really so dumb or unthinking we don’t realize that socialism is not our only option? There are wonderful third options waiting for us to use as new ways of ordinary daily trading—work for cash, spend cash on bills, save some—much like the wonderful experimentation a few brave souls conducted during the New Deal years. The familiar old capitalist system we used to know, even with all its warts, did indeed help to build this rich nation—but it has now gone rogue. Capitalism has outgrown its britches. Today it is seriously harming our nation and our people in new, more dangerous ways than ever experienced before. Other ways of doing economic business could serve us fully as well as capitalism ever did, and do so a whole lot more fairly than it ever did. We allow this boom-and-bust lunacy—and it is we who are responsible for taking control of this out-of-control careening capitalist juggernaut that keeps crashing, making ever more of us poor, and most unfairly distributing our colossal national wealth. What a mess.