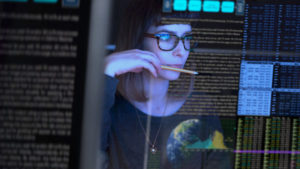 “And the next I know is that I am standing in this dark room and there is my body on the bed and a sort of darkness, and I look down and see myself, and I said ‘Oh.’  It is sort of surprising because you still feel real. It’s like I am here but I am also there. And about that time one whole side of the wall in the room became like a scene in a dark forest with the sun rising behind it, and there was this path going out through the woods. And I looked at that path and I thought ‘Boy, I really want to go up there. I really want to go up that path.’ And I started moving and then I suddenly realized, ‘Oh, I know what’s happening, I’ve died. I know if I go up that path and go to the edge of the woods and into that light, I’ll be dead. But it was so, so peaceful and felt so good. I had never felt that way on the planet. So I started moving up the path and the light got bigger and bigger. It got very big and I started seeing what you call now sort of past memories, a life review kind of thing. And I could see stuff that made me unhappy, and how unhappy I had been, and things like that, and so at that point I said ‘Stop!’ and just everything stopped!  And I was surprised; it stopped. And suddenly I realized this must be an interactive experience, because I am able to talk to it.”

Understanding.           “And at that time the Light revealed itself to me on a level that I had never seen before. I can’t say its words, it was a telepathic understanding more than anything else. I could feel it, I could feel this Light. And the Light just reacted and revealed itself on another level, and the message was ‘Yes, [for] most people, depending on where you are coming from, it could be Jesus, it could be Buddha, it could be Krishna, whatever.’ But I said, ‘But what is it really?’ And the Light then changed into—the only thing I can tell you [is that] it turned into a matrix, a mandala of human souls, and what I saw is that what we call our higher self in each of us is a matrix. It’s also a conduit to the source;  each one of us comes directly as a direct experience [from] the source. And it became very clear to me that all the higher selves are connected as one being, all humans are connected as one being, we are actually the same being, different aspects of the same being. And I saw this mandala of human souls. It was the most beautiful thing I have ever seen, just [voice trembles], I just went into it and [voice falters], it was just overwhelming [he chokes], it was like all the love you’ve ever wanted, and it was the kind of love that cures, heals, regenerates.”

Intense yearning and time travel.     “And the more I went into it the more I just said, ‘I want to know, I really want to know what’s going on.’ I just kept saying that, ‘I want to know, I want to know.’ And I was taken into the Light and, to my surprise, through it, poom! Like some kind of sound barrier, so that I went through it. And if you can imagine [one’s own] higher self being—it looks more like a conduit than a being, a navel cord, or something like that. At the time it seemed like I was being propelled somewhere. I don’t know if I was moving anywhere in space, but suddenly I could see the world fly away. I could see the solar system fly away. I could then see galaxies and—it went on.”

Back to the big bang. “Eventually I got the feeling that I was going through everything that had ever been. I was seeing it all—galaxies became little stars, and super-clusters of galaxies, and worlds upon worlds, and energy realms—it was just an amazing sight to behold. And it felt like I was zooming somewhere but I really think it was my consciousness just expanding at such a rapid rate. And it happened so quickly but it was in such detail that there came another light right at me and when I hit this light, it was like [pause] I dissolved or something. And I understood at that moment I passed the big bang. That was the first light ever and I went through the big bang. That’s what happened. I went through that membrane into this—what I guess the ancients would have called the Void. Suddenly I was in this void and I was aware of everything that had ever been created. It was like I was looking out of God’s eyes. I had become God.”

Where God is.   “Suddenly I wasn’t me anymore. The only thing I can say, I was looking out of God’s eyes. And suddenly I knew why every atom was, and I could see everything. And I stayed in that space, I don’t know how long. And I know something very deep happened there. … And then the experience reversed. I went back through the big bang and I understood at that point that everything since the big bang, since what they call the first word, is actually the first vibration. There was a place before any vibration at all. … The interesting point is that I went into the void, I came back with this understanding that God is not there. God is here. [laughs] That’s what it is all about. So this constant search of the human race to go out and find God… God gave everything to us, everything is here—this is where it’s at. And what we are into now is God’s exploration of God through us. People are so busy trying to become God that they ought to realize that we are already God and God is becoming us. That’s what it is really about.”

Return to the first Light.       “When I came back to the first Light again—and there was a whole thing that happened between the second light and the first light—it was like a reversal, but this time I could see everything in its energy form, its pure essence, as if I could see you as an atomic form. And it was quite a sight to see the entire universe as we know it as an energy form, and all of it interacting, and all of it having its place and reactions and resonances. It was just an unbelievable dance that was going on. So then there was the second light, the matrix I came through again and at that point…  [it was] more than human souls. Human souls were a part of it. What I saw as I came back through was that whole Gaia thing, and this is before I even knew what Gaia was. I saw that the solar system we live in is our larger, local body. This is our local body and we are much bigger than we imagine. I saw that the solar system is our body. I am a part of this, and this earth is this great created being that we are, and we are the part of it that knows that it is. But we are only that part of it. We are not everything., but we are that part of it that knows that it is.” [Excerpt from Kenneth Ring: Lessons From the Light.]

Religious parallels to the GA

No existing religion exhibits strong parallels to The Godly Algorithm, though several encompass aspects of it.

Hinduism. Mainly theistic, it teaches that there are multiple paths to reaching the deity.

Hindus believe all creatures have a soul and all souls are parts of one great supreme soul. Other central beliefs include the universal law of cause and effect, and a continuous cycle of life, death and reincarnation.

Judaism has no dogma or particular beliefs one must hold. Judaism deems actions far more important than beliefs, and older Jewish understandings of reincarnation strongly emphasized individuals’ absolute free will to make moral choices. Basic teachings hold that the one true God is a unity, a “whole spiritual being” who created the universe. Scholarly examinations of Jesus’ teachings directed at Jewish reform reveal a strongly panentheistic message that God is in everything, that everything is God.

Jains consider body and soul to be different things, the body being a mere container which the conscious, living [soul, mind, spirit] inhabits and animates.

Confucianism. Teachings mirroring the Golden Rule focus on humanistic models of family, public life and educational standards intended to develop individuals morally and improve the community and world as whole.

Taoism: The universe is said to spring from the Tao which impersonally guides things. The Tao is the origin and law of all things in the universe, making all life and motion in nature possible—the absolute principle underlying the universe and combining within itself “the way” (code of behavior)—a simple and balanced life in harmony with nature.

Buddhism characterizes reality in terms of relationships and processes rather than entities and substances. Teachings hold that nothing is permanent or fixed, and that change is always possible.

Look up and out at the vast evolving cosmos, and see God.

Look down and inside the mysterious tiny quantum vacuum, see God there too.

Look beside you, at your neighbor, and see God there too.

Lookest thou then in the mirror.