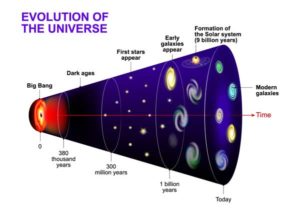 Effects, causes, and a rant at Science

An entire universe just disappeared into a dot, a theoretical point that we puff up by naming it “a singularity.” Where did it all go to? Which is simply the backwards way of saying where did it come from in the first place?

“It just happened,” answers science, in a typically religion-like way. “Just is.” You will actually read these words in heavy books written by famous living scientists.

Balderdash. Does science actually expect open minds, questing minds full of curiosity, to just accept—on faith—that the big bang which produced our very existence “just happened”—as if by magic? Common sense rages: WHERE did it come from? Are you, the learned scientific establishment, actually saying that you can just ignore a question like this? You do, you know—you ignore it all the time. Doesn’t that even bother you? Somebody asks you where the big bang came from and you change the subject—shuffle your feet a little nervously and mutter That’s not my concern, my science only deals with things it can deal with.

And that’s only confronting your inane ignore-ance of where the big bang came from. How about if we ask a real zinger, like WHY did the big bang happen? What—or who—caused the big bang to occur? It most assuredly is an effect—can we just assume it had no cause? From birth and throughout life we observe cause and effect;  is that natural law somehow suspended in the special case of the big bang?

Since we can with equal justification assume the existence of some force—some almighty creative thing…or entity…which we might call “Causer-Of-The-Big-Bang,” can you think of a better evidentiary basis for supposing that maybe—just possibly—that Causer might also be legitimately alluded to by the popular nomenclature: “God”?

Science, we are displeased with you. There’s old long-dead Galileo, who got in trouble for being sarcastic to the Pope, and you still rant and rail these near four hundred years later about his condemnation by those closed-minded old medieval churchmen—yet, exactly as those churchmen refused his invitation to look through his little telescope and see for themselves the truth writ large in the moons of Jupiter, you avert your scientific eyes and refuse to look at the glaringly obvious mystery of the big bang. You’ve had the gall and temerity to criticize religion for believing in magic—in fairy tales, you say, in sonorous timbre worthy of Nobel laureates. Yet you deliver nothing more credible on deep questions that matter profoundly—at least to that vast majority of us who wonder why we’re here and what we’re supposed to be doing. Answer Science: How can you dare call others superstitious when there is no apparent prospect of yourself doing a farthing’s worth better?

Science, you believe and preach that a big bang occurred, yet you refuse to face up to the fact that it had to come from somewhere. And since it obviously did exactly that—came from somewhere else—then there is no reason to avoid the question of why it came from that somewhere. The mere fact that you have not the slightest glimmer of an idea why is not a reason to ignore it. And may I just add that the big bang is but the first of some dozens of scientific enigmas you blithely ignore (e.g.: Why are constants of nature constant? What is energy?).

By your own standards, Science, it can be no accident that our minds have evolved to be logical, to employ logical reasoning, to insist on following the natural curiosity that is built into our intellectual makeup. Our reasoning human intellects are insulted, Science, when you offhandedly say “Oh, it just happened—now let’s move on to something we can deal with.” Just happened, indeed. No, let’s don’t move on. Let’s stay right here and focus on the real questions of 1) where the bag bang came from and 2) why it came. The truly open mind insists Let’s pursue these basic questions and see where they lead us. Wherever that might be.

Instead of ducking the issue, let’s be—for a change—scientific about it. The big bang merely heads a long string of questions that science ducks and we’re going to pursue in these pages. Such pursuit—despite the failure of both science and religion to provide reasonable, reasoned answers—worthy of reasoning minds capable of addressing hard questions—takes extraordinary persistence, and a certain amount of courage.

Four evidences for the big bang

We’re not going to just raise these matters and move on, leaving the reader to wonder about evidence behind that claim that a big bang really happened. Let’s dig in and take a hard look at the scientific evidence. It looks pretty good compared to the evidence provided by Old Turtle and Genesis—by all other religious-mythic versions, in fact.

In the manner of scientific method, scientists made several predictions about phenomena that should be true if the theory of a big bang is correct. As luck would have it, four important predictions have in fact been made and subsequently verified over recent decades as improving technology gradually enabled relevant observations and measurements. Examining them briefly will be good rehearsal for understanding the “appropriateness” that qualifies facts to be recognized as credible evidence by science.

The Prediction:  The (presumed) primal explosion that was the big bang (also presumed)—if it really happened—would have given a colossal outward push to all of the original matter, the way a bomb does, say. Therefore the universe presumably might still be expanding outward after all this time. Evidence of such continuing expansion would be:  To observe that galaxies are receding away from us in all directions.

The Evidence: In the late 1950s Alan Sandage, using the 200-inch telescope on Mount Palomar to test Hubble’s law farther and farther out, observed that distant galaxies were receding at velocities at least ten percent the speed of light. The farther away they were from us the faster they sped. This observation of an expanding universe was the first hard evidence that expansion of the universe (an observed effect) was probably preceded by a primal outward push (the presumed cause). The cause can only be presumed, but—when you consider the obvious—what else could cause such an effect? Gravity, throughout the universe, pulls things together. Even things on opposite sides of the universe (notwithstanding many scientists deny the universe has “sides”) have some gravitational influence on each other. So any force powerful enough to preempt gravity’s vastly long reach had to be very powerful indeed. A really big bang could do the trick.

The Prediction: Physicist George Gamow reasoned that if the universe was created by a hot explosion, extreme heat in the earliest moments of the universe’s existence would have produced only light elements with the simplest atomic structures, such as hydrogen and helium. These elements therefore should be the most abundant in the universe. If it turned out that they were, then a big bang with great heat could reasonably be inferred. Gamow’s ideas ran counter to prevailing scientific mindsets that a big bang would have been a cold event. A cold state, he reasoned, would have produced high density elements like iron, making them the most abundant—and he knew they clearly were not. A lot of scientific mindsets didn’t hold back from telling Gamow how wrongheaded he was.

The Evidence: Evidence forced the mindsets open. The lightest elements have in fact long been observed, and reliably measured, to be exceedingly the most abundant across the universe. Elemental matter created in the big bang thus was about three quarters hydrogen (73%) and one quarter helium (25%). Those two alone total 98% of all matter in the universe today. The seemingly meager remaining 2% has been enough to make all the planets in the universe, plus a great deal more. Since the 2% included only slight traces of lithium and deuterium (and little else) produced in the big bang, all the heavier elements were made later, in stars. Stars cannot make significant quantities of the light elements, because hydrogen and helium are the first to be consumed after a star forms—in most stars they are the primary fuel. Therefore the furiously hot big bang itself had to have forged the plasma of protons, neutrons and electrons that soon merged to make hydrogen the most abundant element. Gamow’s prediction has been well verified by observable facts.

The Prediction: If a big bang really occurred it would have generated such extreme heat (billions of degrees) that it would have left behind a background residue of hot radiation across the universe. Such hot radiation would have expanded along with everything else precipitated by the big bang’s outward force. Fossil residue of this radiation, even though now greatly cooled (to so-called “blackbody radiation”), therefore should still be present all over the universe. If it is still present, modern telescopes should be able to find it.

The Evidence: In 1964 radio astronomers Arno Penzias and Robert Wilson were trying to use an obsolete horn antenna originally built in hopes of amplifying satellite radio signals over long distances. Temporarily stymied by a persistent “white noise” which they at first blamed on pigeon poop deposited in this open-design antenna, they soon realized the noise they were hearing was their instrument picking up the pervasive “glow” of remnant heat left over from the big bang—now known as “cosmic microwave background radiation” (CMBR). Anyone can observe this big bang evidence—it appears visually as part of the “snow” on a television screen tuned to no channel.

This ancient remnant glow, painted broadly across the heavens, was seen to be “isotropic,” meaning it has approximately the same structure in all directions. Its carefully measured temperature, only three degrees above absolute zero, is sufficient for certainty that fossil warmth literally left over from the big bang has been found. Thus the prediction was verified, and Gamow’s theory of a hot big bang was reinforced overnight. Virtually all scientists today regard this confirmed observation of the cosmic microwave background radiation to be the death knell for any theory that lacks a super-hot, super-dense beginning. All odds are on the reality of a big bang.

The Prediction: The observation that galaxies are irregularly distributed in the universe today supports an assumption that irregularities must have been present in the very early universe’s fluctuating densities before galaxies had formed. It follows that such early irregular “density fluctuations” should still be detectable in remnant cosmic microwave background radiation, and they should show up as tiny differences in temperature. This “fossil distribution of energy” would predictably lie at the far infrared end of the spectrum, and would now consist of extremely cold radiation at a temperature of about 3 degrees Kelvin above absolute zero (as previously noted for the third prediction).

The Evidence: In 1989 the actual temperature was found to be an average 2.725 degrees Kelvin, an observational finding remarkable both for its precision and its correlation with the prediction. This first definitive measurement of the microwave background was made by the Cosmic Background Explorer (COBE) satellite. Small fluctuations in the early microwave background were the original seeds of the large-scale structure of galaxies and galaxy clusters we now see across the universe—the beginning of what we now call self organizing universal evolution. Starting with these small fluctuations, the gravity of regions with slightly denser matter gradually attracted ever more matter, while less dense regions became gradually emptier. The over-dense areas were the precursors that evolved, eventually, into galaxies. Distribution of matter in the early universe thus could not have been uniform when expansion began, else structures like our Milky Way would never have developed. Neither galaxies nor people would exist without this self organizing property of the universe, to which most everyone gives so little thought.

Self organizing—almost as if the big bang arrived as part of a big package complete with self-contained system programming that we might call a “Godly Algorithm.” Amazing.