Creation stories: In the Very Beginning… 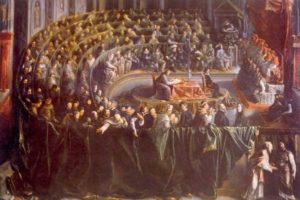 The Trial of Galileo: convicted for claiming earth circles the sun)

Modern science tells us it all started with a very big bang. Everything that is now in our universe—stars, galaxies, gas clouds, interstellar voids and a great deal more—has come from the remnants of an almighty primal explosion. It emerged in an instant out of an infinitely tiny point and rapidly spread out farther than our best telescopes will ever see. And that was the origin of our universe, the beginning of everything, including us.

The monotheistic Judeo-Christian-Islamic religions that have descended from the ancient Abrahamic pastoral traditions of certain combative (though not all illiterate) desert sheep herders say precisely the same thing with slightly different words but no difference at all in concept:  In the beginning, God created the heavens and the earth… (Genesis 1:1). Two verses later the words “God said ‘Let there be light,’ and there was light” correlate nicely with scientific certainty that light did indeed appear 380,000 years after the bang when the superheated (3,000 degrees Kelvin) primal plasma finally cooled enough that atoms could form and light could visibly pass between them.

On the surface at least, it’s hard to tell the Genesis and scientific versions apart—can anyone disagree that either version is a whit more or less fantastic or believable than the other? There weren’t many people standing there as witnesses. That ancient Genesis version has been passed down, remarkably, fairly consistently among these three cultural descendants of Abraham, though the Islamic version, the latest to arrive, has several unique twists. Science’s version, by contrast, is less than a century old and may be expected to reflect the latest and best astronomical technology.

Other major religious traditions that never heard of Abraham, such as Hindus, Buddhists and Taoists, have their own creation stories. Like the Abrahamic, they also encompass hundreds of different versions and iterations among their various sects, tribal legends and nationalistic subdivisions, or on whatever other basis their religious beliefs have been subdivided and branched over the centuries.

Still other cultures such as Native Americans, Aboriginal Australians and indigenous peoples around the world—which are regarded as non-organized by modern religious standards and thus are not counted as major world religions—have equally interesting equally credible variety among their stories of the universe’s creation, and of the life-ing and people-ing of the earth.

An example is the ancient Corn Mother story, revered and perpetuated yet today among numerous Native Americans. In most versions a beautiful young Corn Mother, representing the fertile mother earth, appears and lives among the early people (who she sometimes gives birth to) for many years, teaching them how to care for themselves and live respectfully with the sustaining earth. She eventually dies as all things must, leaving to the people her body in the form of corn they may plant for life sustenance through all time to come. Many other spiritual originators live on under names such as White Corn Maiden, White Buffalo Calf Woman, Winter Mother, Grandmother Turtle, Wakan Tanka, Great Spirit, and the Manitou(s)—spirit beings that control nature and possess supernatural powers.

My personal favorite involves Old Turtle or Great Turtle, still widely respected, who in one way or another created the earth and protects it by carrying it around on his back. I have a small rock, found when I was eight years old, of such size and shape that I believe it to be a fossilized turtle head; safely treasured away in a small rawhide pouch, I think of it as my totem, representative of Old Turtle’s wisdom. Many Native Americans still refer to the North American continent as Turtle Island. This Anishinaube telling presents an interesting blend of Old Turtle, an earth Mother and spirit Manitous with the ancient legends of a great flood that persist throughout all parts of the world today:

At the time that our ancestors were conceived by manitous in the sky and the world was covered by flood, humankind’s predecessors [animals, birds, fish, insects] were struggling to stay afloat and keep from drowning. Yet despite their plight, the animals took notice that Sky Woman’s time was at hand to give birth to a new being, but she had no place to deliver it. Out of compassion for the manitou and her offspring, the floundering animals persuaded one of their number, the Giant Turtle, to ride on the surface of the flood and offer his back as a place where the Manitou might rest and even give birth. The Giant Turtle rose to the surface, and the animals invited Sky Woman to come down.

Upon settling on the Giant Turtle’s back, Sky Woman asked for and received a moiety of soil retrieved by one of the least of the animals, the muskrat, from the bottom of the sea. With this small amount of soil, she created an island that became her world and that of her children and their descendants. From the beginning, animals, birds, fish and insects have served not only humankind but the manitous, spirits, and deities that abide in the supernatural, to enable them to fulfill their earthly purposes.  (Quoted from Basil Johnston, The Manitous, Minnesota Historical Society Press, 2001)

These origin stories, whether religious or scientific, all appear quite different from each other. If we peer very close we may perceive among many of them a core idea called The Perennial Philosophy, which generally embraces nuances of the Golden Rule as moral guidance for human conduct. But in their surface details on how the world began, what stands out is their exceeding differences—e.g., indigenous peoples’ oral traditions versus the Oriental religions versus the Abrahamic religions, and all of the above versus the scientific version. Emphasis, unfortunately, is usually placed on the “versus.”

Accordingly, we may proceed immediately to the conclusion I reached in early childhood—they can’t all be right. With such glaring differences on how it all got started, even if someone’s partly right, clearly somebody’s also at least partly wrong. Just like the Baptists and Church of Christers of my early memories, they disagree with each other, preaching different “facts” or differing opinions about the same facts—therefore somebody for sure is wrong about something. Equally possible, nobody is right at all.

But how shall one determine who’s wrong and which part it is that they’re wrong about? Even if not completely wrong, if any two disagree on anything at all they cannot both be right, and in fact there’s hundreds of them all disagreeing with each other. Many among all those scientists and churchmen point fingers and call each other wrong. Churchmens’ denunciations of each other are often fiercer than their denunciations of science, which they all dislike, whilst scientists faux-courteous challenges of each others’ conclusions in respected peer-reviewed scientific journals are often soft gauze concealing a steely blade.

On the uncertain question of how the universe got started, there are at least two options on which personal opinions may be based:  in general, science opts for objective evidence whereas religions opt for subjective faith. The only “evidence” supporting religious beliefs is the fact that the universe and ourselves within it obviously do in fact exist—for here we are, we and this universe-full of stuff, therefore we and it all got here somehow. That much is solid reasoning based on solid observation. Whether one attributes our existence to a big bang or YHWH/God/Allah or Old Turtle, however, is a tad less solid.

In every non-scientific religious tradition, including those familiar Abrahamic heirs Judaism, Christianity and Islam, the magical aspect is right up front. No pretending it wasn’t magical, it was—it happened—an act of pure magic famously declared and implemented by an all-knowing all-powerful Creator whose divine knowledge and powers are infinitely beyond human understanding. Human ability to passively believe this magical explanation is considered exceedingly honorable by advocates who extol faith as an ultimate virtue and proper use of the human intellect.

Faith-based beliefs are much derided by modern science as credulous superstition of the worst sort—equivalent to childish belief in fairy tales or that amazing fellow Santa Claus about whom we lie to our toddlers. Religious belief in magical happenings is scorned as the antithesis of scientific method with its noble requirements for observation, evidence, double-blind experimentation and, above all, replicability (side note: the poor quality of replication has been causing somewhat of a scandal among scientific researchers in recent years). Good scientists esteem scientific method in measure indistinguishable from the reverence good churchmen reserve for relic finger bones of saints.

Science considers itself intellectually far above believers in magic (not merely apart from—above). And science remembers, as poignantly if it were yesterday, how good old science-minded Copernicus, fearful of medieval church reaction, arranged that his finding that the sun, not the earth, is the center of our solar system would not be publicly released until after his funeral. As poignantly if it were yesterday, science remembers the cruel inquisition and injustice imposed on poor science-minded Galileo for imprudently pushing the same heliocentric idea in a persistent little campaign of sarcasm that ridiculed the unenlightened—who, unfortunately, happened to include His Infallible Holiness the Pope. Galileo could have learned something from Copernicus, but he didn’t.

Science remembers these injustices and more. One reads about them all the time in books written by scientists. Scientists seemingly will never let go of these four-century-old resentments and move on. Science is self evidently so devastatingly right in its rightness that every reminder of its historical struggle to rise despite the powers of dark ignorance is a new affront, worth saying all over again in every other new scientific writing.

After all, it was modern science, not any religion, which produced the fairly unassailable observational evidence supporting a solid conclusion that the big bang was real. It did happen—a big bang really is how the universe began. As the foundation of All That Is (Or Seems To Be) The Bang is a not unimportant concept for science to hang its hat on.

Unlike religion, which makes no pretense of not believing in magic, modern science loudly eschews magic and claims to opt for evidence alone—while defining what shall constitute credible evidence. Most scientists truly believe, in the believing manner of true believers everywhere, that they so opt. But they’re quite wrong about this. While opting quite genuinely for evidence, a majority of scientists also permit a substantial measure of magic to underpin the foundations of their reasoning, thereby rendering the scientific posture less pure than it thinks it is. Acknowledging the ultimate importance of the big bang concept, let us briefly observe this scientific posture.

Consider what we know of the big bang. We observe that the universe is expanding, red shift differential at various distances making that obvious. Discovering this impeccable measurable evidence of expansion is what surfaced the big bang idea in the first place. So let’s take that old movie reel and play it backward.

The broken coffee cup rises from the floor and reassembles itself up on the table, while the universe condenses back down, down, to whence it began. The stars and galaxies can now all be seen as parts within a whole, and that whole is a spherical universe that keeps contracting, becoming denser, more compact, down to the size of a single galaxy, down to the size of a tightly packed solar system, the size of a moon, a basketball, the whole universe now the size of an infinitely-dense pingpong ball, then a mere dot, then…