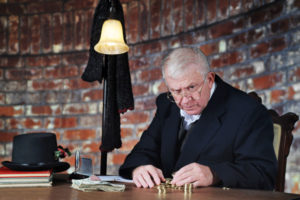 Reflections and commentary on The Godly Algorithm

Help others.  The first mandate—and the highest priority—is to help others. However, this is a choice. Whether to help others is set against serving oneself. I have become convinced that every human makes this fundamental choice, usually early in life, in most cases below the level of consciousness. The notable exceptions who make the choice consciously often stand out and become famous names. Once made, the chosen path usually predominates for a lifetime—though either path can be consciously changed, and sometimes is, to the other. Here is what is plain for the eye to see:

Empathy and compassion typically evidence a life choice to help others.

Selfishness and greed typically evidence a life choice to serve oneself.

The argument can be made—and it is daily made by a great many in ordinary public discourse—that serving self can achieve one’s life purpose as fully as can helping others. And it is at least partly true, since in fact neither choice is ever consistently all one way or the other at all times. As a practical matter, no person can effectively help others without first helping oneself up to some reasonable level of self competency. Having an adequacy of income also certainly helps, though some of the most generous, helpful souls I have ever seen were poor as church mice. Similarly, no person who chooses to serve self does so to the complete uncaring exclusion of all others at all times throughout a lifetime.

My personal intuitive feeling is that what we humans call the moral high ground consists in helping others, for—indeed—many are the others who need help. Some need it desperately. It seems to me that those who primarily serve themselves inevitably create negative situations whereby others are harmed, and causing any harm to others feels intrinsically wrong—to me. A contemporary example is the tiny fraction of super rich individuals controlling such a quantitative majority of national wealth that a growing subset of the population—soon to be a majority—are becoming so impoverished they must struggle and suffer to acquire the most basic necessities for staying alive.

One easily finds authoritative sources making the case that spiritual growth can be and is attained both ways—by serving self as well as by helping others. Some of the most unchallenged advocates of this view are called Chicago-school economists, and finance and hedge fund CEOs. I cannot prove this view wrong, but I decline to give it credence. All the evidence of my experience is that these particular self servers spread harm across the citizenry in measures that challenge every understanding of morality and ethics. Yet we must all acknowledge that serving self is widespread—rampant—in the world today, and probably has been so in all past ages. The popular names for it are good and evil.

Puerto Rico is not just the latest battlefield for a phalanx of hedge funds called “vultures,” which pick at the withered sinews of troubled governments. In Detroit, Greece, Argentina and now Puerto Rico, vultures have bought distressed debt on the cheap, and then used coercion, threats and legal action to secure a massive windfall, compounding the effects on millions of citizens. The legal wrangling masks an irony:  as creditors demand that Puerto Rico pay back everything it owes, hedge fund managers have used the island as a tax haven to avoid their own responsibilities. ….This is a $3 trillion industry that operates largely in the shadows.

David Dayen, in The American Prospect

In allegory, Bob Cratchit carrying Tiny Tim while shopping for a pitifully modest Christmas “feast” may stand in for the choice to help others, while Scrooge, before the three spirit visitations transformed his perspective, well represents the choice to serve self. Cratchit prevailing through adversity in order to help and sustain others represents spiritual growth consistent with the mandate of All-Being. Scrooge serving self well characterizes absence of spiritual growth—until late in life, after his unsettling encounters with the ghosts of Christmas past, present and future.

What is most instructive is that Scrooge’s remaining generous years counterbalanced his entire preceding life of self serving and non-caring for his fellow man. A little good negated a lot of accumulated evil. The new Scrooge who eagerly helps others for his few remaining years accrues as much “virtue” for that help as if he had done so through his entire lifetime. This is because he has finally learned The Lesson he came into this life to learn. He achieved his Purpose. The length of “time” he spent helping others versus serving self is irrelevant—because, as is well attested by physicists and NDE experiencers alike, time is an illusion that does not in reality exist.

In general, the measure of one’s interactions directly with others is more important than actions one takes with regard to humanity as a whole. A person who invents a new strain of rice that will sustain millions more than the old rice certainly helps others, but that same person accrues greater virtue for the simple direct act of helping a disabled elder cross a busy street. Conversely, the pilot who releases bombs at thirty thousand feet knowing full well that casualties will include innocents as well as intended targets, none of whom will ever be known by the pilot, would serve self even more by personally harming one single person through an act of intentional violence.

When I was a young professional, ambitious and eager, I used to reason that my capacity to help others correlated with how high I would be able to rise in the organizational hierarchy. I envisioned a triangle with myself at the apex—my “helping potential” depended on the height of my triangle. Rise a little, I can help maybe ten people. Rise higher, and the span of my reach might help a hundred. Rise to “the top” and I can help thousands. Right? It took quite a while to abandon this foolish view. Abandonment was helped along one day years later when, literally, I helped a little old lady cross the street.

Yesterday by serendipitous chance, as the light turned red and I rolled to a stop, a legless man immediately piloted his motorized wheelchair across the lane and stopped by my window, looking in beseechingly. I lowered the window. Intensely then: “Sir, could you possibly spare me three dollars? I really need it.” I fetched out my wallet and, on a whimsy, handed him a ten dollar bill, cheerfully telling him “You hit the jackpot.” Never have I seen a face light up brighter with surprise and joyfulness. “Thank you, bless you!” he overflowed, and wheeled away. My wife observed that he may spend it on drugs or alcohol instead of food, but we both agreed that didn’t matter—my side of the equation consisted of the giving and the joy it gave him. I felt good about it all day.

Attain Knowledge:  This mandate is subordinate to the first and it has three aspects: Knowledge, Understanding and Wisdom. Increased Knowledge may lead to increased Understanding which may increase Wisdom. Nothing is guaranteed of course, but when a substantial measure of Knowledge is acquired it can result in some measure of increased Understanding—and sometimes does. Comparably, moderate increase of Understanding can be attended by some small measure of increased Wisdom—and it sometimes is. A person with increased Wisdom is usually better qualified to pursue the first priority:  helping others.  I am quite convinced that personal dedication to increasing one’s knowledge, understanding and wisdom, and in fact putting forth personal effort to attain these, contributes mightily to the goal of spiritual growth. But this is true only if the second and third gains are corollary to the first—knowledge alone does not guarantee understanding, nor does understanding a thing mean that wisdom will necessarily follow.

Summarizing all the above produces two simple answers on the question of human purpose and how to achieve it:

These ideas carry great meaning in and of themselves, but they are mere introduction to the practical context for applying them in everyday life, as developed in the next chapter.

The lessons learned, brought back and told to the rest of us who have ears to hear, are gifts conveyed via near-death and spiritually transformative experiences. Chapter four presents compelling evidence of a higher reality that conflicts with no religion, is at the heart of every religion, yet informs us in love-based ethics and loving moral behavior without reference to any religion. A reality that rises above, and is a more-becoming. It suggests—no, indicates—a merger, a uniting, of traditional adversarial proponents of science “versus” religion. In reply to my personal lifetime of seeking it attests that, Yes, science and spirituality are one and the same thing, are manifestations of the same unity, precisely the same as the endless manifestations of energy, or the many images of God.

Billions of humans on this planet believe devoutly in the existence of non-material “souls,” and a “spiritual” God. Yet they cringe and turn away when they hear the non-doctrinal word “ghost.” Millions of people deeply committed to truth seeking through the rational, observational logic of science believe devoutly in non-material quarks and particles, unseeable constants of nature, an unobservable big bang, and a mysterious miracle commonly called “consciousness” but not understood by anyone alive. Yet many cringe and turn away when they hear the non-material word “spiritual.” They both turn away from spiritual lessons gifted to us by the great many who experience near-death and transformative truths of the spirit. We are better than this silliness. We must stop failing.