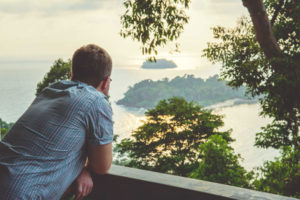 [B]ringing in unformed individuals, so to speak, and turning out some which presumably are at an advanced stage on the basis of whatever scale is set up for us…that must be the purpose if there is a purpose. I have concluded that intuition has a basis, and I intuitively feel that we have a purpose. And the great majority of people agree with me, and I have set up as a criterion that anything that the great majority of the human race feel intuitively is probably right.

This is the first of my dreams that really stuck in memory. At a time in life when I could barely afford to rent a small house, I dreamed I stood on a balcony in a house that I had myself designed and built. This dreamed house was large enough to have a second floor, and on a second floor balcony I stood at a handrail overlooking the floor below. But something felt very wrong about the house’s design. Only a very limited area was visible from where I stood looking down.

The balcony overlooked a small, confined corner of the floor below, making it impossible to see beyond the few square feet contained in that limited area. This seemed seriously wrong, distressing. I felt I should have a much larger, broader overview of the first floor from this overlooking balcony. Though the basic design of the balcony, adjacent walls and ceiling seemed somehow wrong, I could see no way to change it to accomplish the much broader view I strongly felt it should have.

The dream had no action, so it is unclear why the memory stuck so strongly in my mind. Memory of it resurfaced, unbidden, for me to re-ponder many times over the years. Always in those rememberings, the dominant feeling was of being “stuck” in that corner, unable to see the much broader view I felt should be seen from this overlooking balcony.

Interpretation: This dream has always felt significant to me, though I claim no certainty of its meaning. A best guess is that, since I dreamed it in my early 20s, it may have had precognitive portent.  (I regard precognition as a credible possibility because the latest dream in this series, described below, was a no-fooling look into a distant future.)

More than three decades after this strange dream, I would personally design and build the home I still live in. Shaped as a simple 40 x 52-foot rectangle, the back half consists of two floors, with several rooms running the 52-foot length. The front half of the house is a single large room, its ceiling sweeping dramatically upward from the front wall to where it joins the second floor ceiling. Openness and lots of natural light are integral to the house’s design;  only the private spaces are not open to and visible from the big room.

On the second floor, extending half the length of this real house, a spacious balcony overlooks the big front room. I frequently stand at its railing, overlooking the entire large room below. I love doing so, for it always brings feelings of great satisfaction and gratitude. My wife and I use that big room often for the open, sharing lifestyle we planned when we wed at middle age. Over our thirty years that room has seen hundreds of happy social occasions including folk dancing, home-made music, group dining and miscellaneous social gatherings, always with fellowship shared among beloved friends.

Originally wed at the tender age of 19, my first marriage ultimately failed after 33 years. In my very different second marriage, the openness, light, loving fellowship and socially-sharing lifestyle lived in this house are integral consequences of our mutual intent and design. These happy things seem to be symbolically expressed in the broad, unimpeded overview from the balcony. I often wonder why that dream came to me in my young twenties, because its meaning for the last half of my life seems too obvious to be coincidental.

After leaving my desperately low-paying job to enroll in college—on bare faith that I’d find means to pay the tuition and it would all lead to a better life—this dream occurred when I was about half way toward my springboard bachelor’s degree. I dreamed of arising early on a wondrously bright and sunny spring morning and going for a long walk across our small city. Ranging far from my residence near the campus, I saw no one else out and about. There was just myself, immensely enjoying the unusually warm early morning stillness. The day felt good and right.

I eventually arrived at a hilly edge-of-town, semi-rural area. Amid dirt streets and scattered small houses signifying a very poor neighborhood, I came to one that now seemed to have been my unconscious destination all along, a tiny four-room abode I somehow recognized from some unremembered past. Here lived—I knew without knowing how I knew—two children, sisters, who were beloved to me. In the warmth of this gorgeous spring morning, they were just awakening.

The windows all stood open, without screens, and I stood outside the window of each sister’s bedroom, greeting each in turn. We talked with sheer happiness and delight in each others’ company for perhaps a half hour until I departed—and the dream ended.

Of this dream, the main thing that stuck in memory was their personalities. The younger sister, perhaps 9-10 years old, was full of fun, mischievous, a lively sprite. The elder sister, about age 14 or 15, was of equally sunny and happy nature but a bit more serious. Her calm and gentle demeanor seemed to me more mature than her years. The maturity I perceived had to do with her internal character development, possibly spiritual in nature. In the dream this was something I “just knew,” a knowing I took for granted without thinking about it. She felt very special to me. I was aware that a deep, warm love was shared between these two young sisters and myself, though I could not remember why or whence came my strong feeling that we had known each other for a long time. I don’t remember the dream having an ending;  I think I simply woke up.

Interpretation: Here also, meaning is elusive despite the felt significance of this dream. Interestingly, many years later I would retrospectively note that the elder sister’s calm, pleasant personality, as I dreamed it, was essentially that of my wife of three decades now. She is eight years younger than me…and, so far as she knows, an only child. But I have always wondered about that sweet, feisty younger sister I met in the dream.

I dreamed I was somewhere in a great forest. There seemed to be little or no undergrowth. The trees were enormous, unreal—20-foot-diameter trunks, with distances of fifty to a hundred feet between trees. They also seemed exceedingly tall, and their heavy canopy shaded out so much light that vision was substantially dimmed at ground level. A few other people unknown to me were present, variously wandering around a large clearing at the center of which there was a monstrous sinkhole.

I stood in the clearing near the edge of the sinkhole. It was perhaps a hundred feet across, rim to rim. The ground within sloped like a funnel, 25-30 feet downward to a truck-sized cave opening. I could see that beyond its mouth the cave angled away on a gradually descending slope, and I somehow knew it went far, far underground. Two of the big trees had uprooted and fallen across the sinkhole, one stretching almost directly over the center above the cave opening, the other slightly overlaying the far rim.

The sinkhole’s slope was not so steep but that a person could easily walk down it and examine the cave opening. Indeed, a couple of my unknown cohorts were doing just that as I watched. A third person stood on the large tree trunk directly over the cave, craning to peer down into it.

I had no wish to join them at either vantage point. I knew they were aware, as was I, that some sort of dreadfully dark and evil non-human beings existed far down in that hole. The whole place exuded an aura of dread, of something awful to be avoided at all costs, for though the dark beings seldom came out, they could do so—and sometimes did, especially if disturbed. The dream did not tell me why I and the others were there in the first place. I have no further memories of this brief but significant-feeling dream.

Interpretation: I don’t have a clue as to meaning. I mention this odd dream only because it left a memory that still feels significant, possibly terrible. I’ve known unhappiness a time or two, but brooding darkness has not characterized my life. But maybe its message is general, not personal. I’m disinclined to speculate, but if I were to venture a guess it would be somewhere in the arena of dark forces threatening democracy and a free society. I cannot say if this dream has any relevance to the next two dreams, though some connection seems possible.