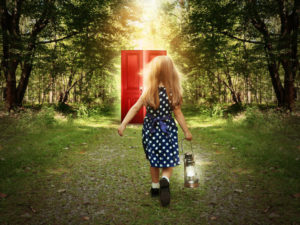 This wide-awake experience, which occurred sometime during my third year of life, has profoundly affected the rest of my life. It didn’t seem to much affect me at the time, or for years afterward, though it would often pop into conscious awareness to be pondered all over again. During my early twenties I finally wrote down how “I got religion behind my mother’s couch,” because I feared the memory might fade and it seemed too precious to risk losing or becoming blurred.  Now in my eighties I doubt such risk ever existed because the memory remains as crisp as ever. My original writing is here edited only for brevity, omitting nothing of substance.

Though I might have been age four, I think I must have been three because I recall how pudgy my legs were, how easily they bent at the waist during that stage when a child likes to sit on the floor, examining things. By age four a boy’s legs grow gangly, not pudgy. Plus I still recall my own self awareness of being very young. When I still crawled, for example, my parents seemed to tower high above me, giants, but with passing time and my own growth their size quickly descended to normal perspective.

At age three most of my images and thoughts reflected my environment of house, yard, surrounding fields, and nearby small town which included stores, post office and church. There were also people—“others”—but they didn’t become meaningful until I reached school-going age and became one among a class of thirty. Some of my remembered thoughts were probably carried home from church, the weekly social event of note in our prairie life. Possibly these included a concept of “heaven,” a desirable place reputedly somewhere-not-here; possibly also “spirit”—something invisible—whatever that meant. These are but logical possibilities—I really don’t remember if they were in my mind.

So there I sat, on the floor behind one end of my mother’s couch, in the narrow space between couch and wall. The experience began when—for no remembered reason—I glanced up and saw “faces” coming at me. Here they came, all in a row, steeply from the upper right, one behind the other.  Just faces, no complete heads, no bodies. In some way I absolutely cannot explain I knew these were the faces of spirits, and they were observing me for a purpose. For a reason unknown, I understood I was of special interest to them. This knowing I felt and remember so well is utterly unexplainable in words.

Their purpose seemed to involve my “helping” them experience real-time observation of this mortal world through the perspective of my mortal eyes and other physical senses. They especially wished to observe, and perceive for themselves, my particular mental perceptions of the things my senses experienced. For example: what I and my sister both recognize as “blue”—do we both see it the same way, or does it appear to her as what I would call “green” but we both know it as blue?

Decades would pass before I learned that this question involves something called “qualia,” notably in relation to an odd sensory condition known as synesthesia—which I happen to have. (When I hear or think of music I also “see” it in my mind; I don’t just hear music, I see it mentally. Synesthesia has many different manifestations—just as energy does—and is a fairly common condition in the population).

These spirits wanted to observe my thoughts. I didn’t know why, but their observations—I knew—were very important to me as well as to them. To accomplish their observations they had to enter my mind, as they were now doing, one at a time.  Their entry did not displace me, we coexisted mentally, each spirit and I, for a fleeting brief instant.  That was all the time required, I somehow knew, for a spirit to enter, assimilate the whole of my mind—memories, perceptions, thoughts and reasoning—and move out, to my upper left, back to its own realm. It was instantaneous transfer of a total mind copy, leaving the original unchanged, to each of thousands of spirit faces—and all happening very fast.

As each spirit face moved out another moved in, used its infinitely thin slice of time to “read” a complete copy of my mind, and instantly passed on through to be replaced in turn by yet another. I recall them all as right there, approaching one close behind the other in a very long line that descended on my upper right from the far reaches of “Heaven” (or whatever), flitting through and looking over my mind, each in turn then departing to my upper left. Though each spirit’s stay was incalculably brief, they were infinite in number so the pass-through I was experiencing would never cease.

I “understood” that this had been going on since before I was born, and would continue until I grew old and died.  Even then only a fraction of this host would have “experienced me,” they were so great in number. All this, inexplicably, I just “knew.” To this day I remember that feeling of marveling at what I was experiencing as I experienced it.

I remember that as I wondered what was going on, what it meant…I received an answer. And quickly became aware that each time my mind posed a question, I instantly felt their answer coming back to me. Telepathic is the only word I know that might convey how this felt—whole understandings simply appeared in my mind, all at once, with no words or sentences involved. When I eventually committed this memory to writing, I invented the following words in a poor attempt to convey the communications that in fact were exchanged directly—my senior paraphrasing of thoughts remembered from age three. There were no real words, just whole thoughts that came instantaneously into my mind, but my understanding of them was total, complete.

My first thought-question was not to them, it was about them:  Are they doing this to all people? Immediately there came back the thought-answer: No, just a few who were expressly placed here on Earth for this experiment. You’ll probably never meet any of the others—they’re few and far between on the Earth.

From that point my thought-questions were addressed directly to them:  Q: Does this mean that we—me and those few others—are we more important than other people?  A: No, you’re just serving this particular…purpose…which sets you a little apart from the rest. Other than that you’re no different from all other people. Everybody experiences the same things you do, through their own eyes, ears, taste, touch and smell, but we’re not observing them as we are you. Most of those in the experiment aren’t even aware that they’re in it or being observed. You are one of the very few who has perceived it.

Q: Will you be controlling me? A: No, you have free will like everyone else. Your choices and actions are your own. We are immensely interested in how you will choose as you encounter each situation that will come before you, how you will respond and opt for your perception of right or wrong, good or bad—and how your judgment will operate in those cases where you’re not sure what’s best. No, you’re in no way controlled. In a way you’re more like an actor on a stage. We are the audience.

Q: An actor just plays a role that was planned by somebody else. Is my whole life planned in advance? A: No. Certain situations you will encounter are arranged; how you respond to each one is up to you.

Q: Are you in here inside me right now, I mean any one of you, since a bunch of you must have flitted through just while I was asking this? A: Yes, we are here now, as we have been and will be, but you can have no conscious awareness of us as we go through—only we of you. Do not fear, we hold no harm for you, only good will. We love you, little spirit, you are one of us, but you may not speak with us, or understand why you have this purpose, until your earthly life has been lived out and you rejoin us.

Then the communications stopped, the experience ended. I returned to awareness of myself setting there on the floor behind the couch. I cannot say if the episode had lasted seconds or minutes, for my sense of time simply suspended while it was happening. But as I now write in this present moment, my bright remembering of it has lasted undiminished for eighty years. After all this time, I am still just floored by it.

That last sentence of their message still has power to moisten my eyes with irresistible emotion;  it recurs every time I recall it, and has been so all my life. I don’t know why.

Reflections on the Faces experience

I spent many years of my life debating with myself whether I somehow managed to create this unusual, very spiritual scenario out of an overactive childish imagination, or if it was indeed real. Many times I have asked myself—Did I honestly have such a profoundly spiritual experience? And just as often did common sense rise up to challenge my doubt—How in the world could a young child, barely out of toddler stage, conjure up such a deeply philosophical scenario as the memory I still hold so clearly? I think it significant that in my twenties, when I wrote down the experience, I was at that time far from even beginning to develop the sophisticated metaphysical and spiritual ideas I would hold much later in life, almost all of which came after age fifty.

But that question no longer matters. After decades of encountering the “supra”-normal experiences described in this chapter, I concluded the faces experience had to have truly happened, and exactly as I remember it. I gave it a fair challenge. For the forty-five years between ages 25 and 70, I was genuinely agnostic about all things religious or spiritual—including my own three-year-old experience in the spiritual category. Beginning with those early childhood ruminations on why Baptists liked musical accompaniment while Church of Christers thought the very same thing a grievous sin, I have always regarded agnosticism as a most honorable expression of honesty. To be agnostic simply means “I don’t know so I’m not going to pretend or claim that I do.” Would that there were more of it in this pretentious world.

And the honesty worked both ways. I remember preferring that the Faces experience was genuine, not something “merely” conjured up by childish imagination. But this preference conflicted with my strong scientific inclinations. Always drawn to the wonder-filled open mindedness of true scientific exploration, and skeptical of my own childhood memory, it seemed ludicrous that all-knowing spirits could have any need to be conducting an experiment of any kind. Much later I would encounter various spiritual writings that do in fact specifically speak of such experimentation across the Veil.

The tug of war between equally strong scientific leanings and spiritual curiosity graphs as an ascending curve across my lifetime, abetted by reading everything I could find that dealt with unexplained phenomena. My curiosity about the unknown and unexplainable was insatiable through my teens and early adulthood. And, I can assure the doubtful, there are a lot of unexplained things out there in this world we think we know so well.