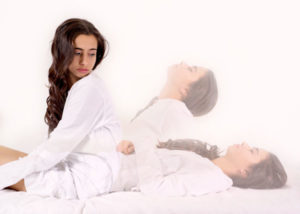 11. Life aftereffects. Encompassing the first year, the first five years, the ten years after an NDE and beyond, the life changes that so often follow an NDE embrace the meaning of this chapter’s title: Spiritually Transformative Experiences—“STEs.” As stated at the chapter’s beginning, a person who has a near-death experience—a dramatically unusual experience by definition—is likely to be so profoundly affected by that experience that his/her life will be transformed in fundamental ways. Many experiencers’ lives take a whole different course than would have been taken had the experience not occurred. Following are some examples of paths this spiritual transformation can and commonly does take after an NDE.

Certainty of life beyond bodily death. Thousands of NDE reports attest that the experiencer knows in the most personal possible way that the Self continues to exist after the body’s physical death. S/he has been there, and now knows the truth of the matter beyond any possibility of debate. S/he knows with an absolute certainty, attainable in no other way, that this material world is not all there is, that life continues—exists—superbly conscious and vitally aware in another realm that is immaterial in its nature and exists in addition to this universe.  Over and above it, one might say.

Several world religions have long said the same thing. However—and not incidentally—this absolute certainty that life continues after bodily death does not produce a rush to go join a church. It is amply obvious to many experiencers that the truths they learned during an NDE are spectacularly at variance from the teachings of world religions—all of them. And even though quite a few westerners perceive the loving light at tunnel’s end to be Jesus (just as eastern peoples may perceive Buddha or a tribal spirit), the learning conveyed in NDE experiences differs markedly from the doctrines taught in the vast conglomeration of sectarian Sunday schools. People who have experienced an NDE have discovered a fuller truth—the whole truth, as is often said in court.

Loss of the fear of death.  The survivor of an NDE experience knows there is no such thing as death. That death of oneself does not exist, that no person ever “dies,” is known with an absolute certainty that can be felt only by one who has personally experienced the truth. The Self has personally known the momentary unpleasantness of being attached to a seriously impaired body that is at or near the point of dying—but then the Self exited that body and experienced some, several, or all the NDE features described above. One of the most common utterances of NDE survivors is  I no longer fear dying.

Transformed values.  One of the most remarked-on aftereffects following a near-death experience is noticeable change in the experiencer‘s deeply held personal values. The measure of this change ranges from moderate to near-total, and in many cases, major are the consequences thereof. Also noticeable is a remarkable consistency in the nature of the value changes:  the value almost all experiencers newly place on loving others, helping others, and growth of spirit—one’s own as well as others’—virtually always increases. The value placed on material matters such as money, wealth and social status nearly always undergoes major decline. Such dramatic value changes don’t always apply to all experiencers, but they do represent a trend that applies to a clear majority. I have never seen an NDE report wherein these after-changes occurred in reverse order.

There is something about coming in touch with the reality of one’s own mortality, and the truth about one’s own spiritual nature, that leaves behind what may be rightly called a reformation of basic life intentions and purpose. I have encountered not a few NDE reports (some dozens I estimate) in which a longtime striver after wealth—often in a high-finance job or a corporate chief of some sort—leaves that occupation within a year after having an NDE and takes up some new occupation, often of very modest nature, in which s/he can help people in a direct and personal way. These cases demonstrate an unquestionable bias toward helping the poorest and most needy among us, and in many cases represent a near-complete humbling of occupation, status and personal income. The choice is sometimes described as a compellingly felt need—the experiencer had to do it.

Needless to say, such changes are seldom met enthusiastically by the experiencer’s mate, family and friends. Critical comments about how the experiencer has “become a different person” are common. Divorces are common within a year or two after an NDE. Even where a wealth comedown is not chosen, drastically changed patterns of attitude, value and behavior are common. A classic example is presented by the remarkable experience of physician Eben Alexander, shared here in brief detail.

Dr. Alexander spent twenty-five years as a typically over-busy neurosurgeon, including fifteen years at Brigham and Women’s Hospital, the Children’s Hospital, and Harvard Medical School where he taught neurosurgery. With a specialty involving patients suffering severe alterations of consciousness such as trauma-induced coma, ruptured aneurisms, brain tumors, infections and stroke, he has performed over four thousand neurosurgical operations. Before he encountered his own near-death experience, Dr. Alexander held typically firm materialist views about life and human existence, including the standard scientific view that the brain generates consciousness, the mind is a purely neurophysical phenomenon, and the concept of “spirit” is irrelevant superstition.

On November 10, 2008 Dr. Alexander fell quickly into coma caused by a rare bacterial meningo-encephalitis of unknown cause. After a week in coma and on a ventilator, he was not expected to survive. Yet on the seventh day to the surprise of all concerned, he regained consciousness and soon began speaking of a fantastic odyssey he had just experienced into a spiritual realm more real than this earthly one. Following his son’s advice to write down everything he could remember before reading anything concerning NDEs, physics or cosmology, Dr. Alexander produced within six weeks a report of more than 20,000 words describing at length of what he had experienced while in the coma.

Only after completing this report did he start reading—and his extensive readings in directions altogether new to his life experience up to that point were, needless to say, highly motivated indeed. To make a much longer story short, he was astonished at the commonalities between the things he had experienced while in coma and the comparable experiences reported by so many others throughout all cultures, continents and millennia.

In these comparisons Dr. Alexander gained new insights into contemporary science’s controversial mind-body discussion, along with a new perspective wholly different from accepted scientific orthodoxy about the fundamental nature of reality. Significantly, his personal NDE experience and subsequent readings left him in no doubt that we humans, like all other creatures, possess consciousness independently of the brain. Or to more accurately state the case, we are consciousness independent of the brain.

In the aftermath of his life changes begun in 2008, Eben Alexander has written three books on NDE-related phenomena, has made countless appearances on TV and talk shows, and now travels widely sharing his remarkable story as a featured speaker at conferences and other venues. He speaks in detail of his post-NDE conviction that consciousness is in fact the root of all existence on this earthly plane, and that a reconciliation of modern science with what is called spirituality will eventually emerge as a natural product of so very many people now known to be undergoing the near-death experience and returning to tell their stories. The basic issue will be science’s ongoing refusal to accept as definable “evidence” the enormous database of documented NDE reports now numbering in the tens of thousands and growing—or to even deign to look at or consider the veracity of this vast database.

I must add here my own long held conclusion that modern science’s reigning mysteries—such as dark matter, dark energy, black holes, the big bang, reconciliation of general with special relativity, and the infinite manifestations of energy—will be resolved only when our scientific establishment outgrows its stultifying and outdated attitude of anathema to the word “spiritual.” Simply opening the mind to true scientific willingness to follow the evidence, wherever it may lead, would not compromise any scientific integrity or require the least acceptance of any religious doctrine. The broad realm of mysterious energy and equally mysterious spirituality does, after all, represent the realm of immaterial energetic things about which science professes such deep interest and such surpassing bafflement.

As for myself, after uploading a great quantity of NDE reports into my open mind for over thirty years, I concluded that energy and life spirit are one and the same thing.

The subject of spiritually transformative experiences is by no means limited to the vast subject of near-death experiences. NDEs are but one of the several forms of STEs, and though they provide ideal introduction to the broader topic, several other forms should be introduced.

Almost everything you just read above about the dozen or so features of near-death experiences can also happen—pretty much identically—to people who are wide awake and in vigorous good health. In other words, you don’t have to be dying or anywhere near dying to experience most of the same features that occur during NDEs. I observed an excellent example at a 2006 conference of the International Association for Near-Death Studies (IANDS) held at the M.D. Anderson Cancer Center in Houston. In a plenary session I heard a young man speak precisely and at some length of his NDE-like experiences while in exellent health. Here as I remember it is his story in brief.

He told of being seated on a bench, outdoors in a public place in broad daylight, having an argument with his girlfriend. Suddenly in mid-sentence he became aware that his sense of Self had inexplicably moved out of his body and was rising upward toward a tunnel. He went on to experience several of the NDE features described above, including envelopment within the Loving Light followed by a life review.

The young man made some effort to emphasize that, to that point in life, he had exhibited considerable arrogance and thoughtlessness, including uncaringly hurtful remarks and sarcasm toward others. He described how, during his unexpected life review, he experienced the hurt he had so often inflicted on others, empathically feeling their pain. He felt deep remorse as he was fully confronted by his inconsiderate ways, and was flooded with a new determination to change his ways, to be kind and helpful to others.

He then reported a sudden involuntary return to his body…and discovered that no time at all had elapsed while he was having the experience. He found himself again at that same mid-sentence, at the precise same point where he had been when the experience began. Subjectively, he felt as if his OBE, life review and all, had lasted perhaps a half hour or more—though objectively it obviously had occurred in a brief instant, all while he was in process of speaking a single sentence.

His reported absence or irrelevance of time during an out-of-body experience is consistent with many hundreds of NDE reports which also pointedly mention their realization that time does not exist in the spiritual realm—that time is actually an illusion experienced only by our mortal selves while here in this physical universe.