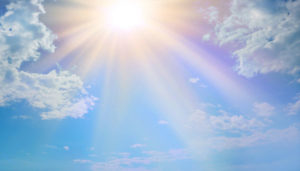 4. Enfoldment into loving light. Let me now aggregate many, many NDE reports into one simple summary: As experiencers reach the far end of the tunnel they seem to simply stop thinking about the “speed” of passage, apparently because, in virtually all cases, their attention becomes super-focused on the light itself. By this point the light eclipses all other concerns and all other thoughts, for the experiencer realizes that this all-encompassing light is God—or [insert the name of your culture’s principal deity].

In virtually all NDEs that reach this point, experiencers consistently report feeling extreme ecstasy beyond all description in the presence of [God]—the experience is ineffable, always described as indescribable. Virtually everyone who experiences it goes to some lengths to emphasize how far this love is beyond the power of words to express. Nevertheless, words—poor and inadequate—are all I have, so I will try to faithfully convey the intensely personal feelings that so many NDE experiencers invariably try to convey with their own words—words they uniformly call poor and inadequate—as they strive to describe the overwhelmingness of their welcoming encounter with [God].

The experience they so often report goes, in aggregate, like this:  God is all-accepting and all-loving. God embraces the arriving Self with a love that is utterly unconditional and complete, a totality of loving acceptance far exceeding any the Self has ever experienced during its earthly life. Many experiencers also describe God as all-forgiving, emphasizing a strong understanding that God is non-judging—that God regards every moment of the Self’s earthly life as a gaining of experiences during which there are no mistakes, only a life-long series of opportunities wherein the Self may choose between alternative courses, with every choice being an opportunity to “grow in spirit.” A great many describe this experience as so colossally overwhelming that they lose all sense of Self—they become one with God. Momentarily, they are God. Most describe feeling they have come home.

Let it be noted, not everyone experiences this loving light. For some, it is at this point that they instead, as described above, encounter the spirits of deceased relatives or friends—or guiding spirits. For some others, the NDE ends here and the experiencer finds him/herself drawn suddenly back into the body. But I think it true to say that most experiencers who reach this point of emerging at the far end of the tunnel have an exquisite encounter with a living spiritual entity that is sensed—instinctively known—to be God, the all-knowing creator of the universe and everything-there-is, who manifests as a sphere of love that is light that is God and is total unity all in one presence of Infinite-Love-Light-Divinity. I think it hard to even imagine such grandeur without personally experiencing it.

Many report being received in similar manner as a mother would enfold her beloved infant in her arms. In almost all cases, experiencers describe a blending, a merging—the human Self becomes one with the God-Love-Light. And some realize for the first time that one’s spiritual Self has always been a small piece of God, a Self that independently chose to go to earth, to enter into a baby body, and experience a mortal life on the earth in order to encounter opportunities to grow spiritually by learning spiritually valued lessons that remain as yet insufficiently learned.

Some descriptions go even further. Within the all-encompassing embrace of God, the Self that is now merged with and infinitely loved by God realizes that Everything is God, that Every Last Thing in The Universe is Light is Energy is Love is God—that God Is Everything-There-Is. I long ago learned the word that describes this surpassing concept of God—panentheism it is called. Now I treasure it. It is the broadest, most encompassing understanding in the trilogy of descriptors of understandings of God:  theism, pantheism, panentheism. The serious seeker will do well to engage these meaningful words.

It must be stated that although this greeting by The Light is the majority experience, not every NDE experiencer has it as just described. Some emerge from the tunnel to be met instead by relatives, friends or guardian spirits who, variously, provide consultation and advice (such as “It’s not your time, you must go back”—somehow revealing that they know it’s to be a near-death, not a total-death, experience). Sometimes these spirit entities conduct the experiencer on a guided tour of the spiritual realm. Descriptions of such tours are intensely interesting, and a few samples will follow shortly.

I attest that the foregoing is an accurate summary, faithfully reproducing in my own best words the intended understandings conveyed in the reports of multitudes of people who have had NDEs and lived to tell what they experienced while officially dead or almost so, of which I have read and deeply considered a very great many indeed since 1975. After encountering so many hundreds—perhaps thousands (one doesn’t set out to keep count of how many one will read in the years ahead)—I think it would be difficult not to conclude the veracity and truth told by all these people, as indeed I did eventually conclude.

After extended years of diligence and cautious scrutiny, I also concluded they are neither deluded nor confusing experienced reality with hallucination. Such ludicrous dismissal is possible only by critics who have not invested the time to simply read the ton of evidence now available for anyone—barring irretrievably closed mindset— to give a fair read.

5. Life review. Many people having an NDE experience a review of their life from birth to the present moment. This strange event most commonly occurs with those who have just been embraced by the Light. For some, however, it occurs without any other context, usually soon after emerging from the tunnel. A large percentage of NDE reports are remarkably consistent on the nature of a life review, which usually goes as follows.

The Self sees its own life laid out before it, as if looking down upon a broad panorama that spreads from birth to this moment. Many describe it as akin to watching a movie, except that everything happens at once—it’s all there, the whole lifetime. The Self re-experiences its entire lifetime, all at once, and may focus in on any part of the lifespan at will. Reports often mention that time does not exist in this experience—one simply re-lives one’s entire life experience in an instant, an omnipresent whole Now.

It seems singularly important that the viewing Self not only sees its lifetime, it feels that lifetime all over again, every instant of it re-lived all at once. Even more significant, the re-living brings with it the feelings the Self had during each one of those life experiences, including long-forgotten feelings that accompanied events in one’s early life so long ago.

More significant yet, one sees all the other people with whom one has interacted through the course of one’s life, and feels their feelings as well. For example, many reports mention being particularly impressed by seemingly small events in which one’s actions and words were exceedingly important to another person, even though the Self may not have known it at the time. Many experiencers of a life review become aware for the first time that some small kindness to another person was inordinately meaningful to that person, and had lasting benefit for that person’s life.

Comparably, many experiencers mention discovering that some careless remark or thoughtless deed made another person feel hurt, angered or humiliated. Many mention how ashamed they feel when witnessing their own selfishness and thoughtlessly hurtful behavior toward other persons—and realizing for the first time how much influence they have had, for better or worse, on other people.

In a majority of life review reports I have read, the experiencer is aware that the aforementioned loving spirit (God or whomever) remains nearby, sometimes offering a few comments to the experiencer, in other cases simply remaining silent but close by and observing. In this regard there sometimes occurs one other phenomenon that I regard as extremely important. When the experiencer feels regret at some misdeed which resulted in hurt or harm to another, the felt guilt and regret are invariably noticed by the Spirit, and the spirit conveys assurances of non-judgment to the experiencer. Some have reported the Spirit asking “What did you learn from this experience?”

I cannot emphasize sufficiently that the only judging that ever occurs relative to misdeeds re-lived during a life review is the experiencer judging him/herself. In report after report the accompanying Spirit does not judge, but simply causes the experiencer to consider whether s/he learned from the negative experience.

It goes without saying that this consistent and widespread reporting of an unconditionally accepting and loving God is dramatically at odds with those world religions which posit a fiercely judging god, along with inherently “original sin” which can be redeemed only by seeking forgiveness under terms of the religions’ stringent doctrines. But there I’ve said it haven’t I. Whereas some life review experiencers report amazement upon learning “how unconditionally forgiving” they discover God to be, one may discern that the larger truth so apparent in these reports is that “forgiving” is not necessary or even relevant when God has conveyed that mortal life purpose is simply to help others and to grow in spirit.

I will close this section with this:  Occasionally, an experiencer reports that the life review began with the accompanying God/Spirit asking (in various words) this question: “What have you brought me?” The meaning of the question is understood—sometimes only after it is repeated—to be asking:  What have you done to help others and raise yourself spiritually? No commentary of mine can possibly add to the import of that divine question, so I simply invite the reader to ponder it as you will.

6. Absence of time. A very high percentage of NDE reports mention coincidentally becoming aware that time is an earthly illusion that is irrelevant in the spirit realm. The unusual ability to observe one’s entire lifetime in an all-at-once glance is often cited as a common example of time’s irrelevance during an NDE, but other examples concern the duration of the NDE itself. Many people mention their sense of a discrepancy between how long an NDE seemed to last versus how brief was the actual elapsed clock time. This of course applies only in particular cases where it is possible for elapsed time to be noted, but the fact is a great many NDE reports emphasize that time is an illusion which only our mortal selves experience here on our planet, in our universe. In the spiritual realm, they assure us, time does not exist.

We should be ever mindful that scientists who today labor in the immaterial field of quantum physics tell us with great certainty that what we perceive as the passage of time is an illusion. Confirming, as did their scientific forebears for the past one hundred years, only a most incomplete understanding of the quantum realm’s endless and paradoxical mysteries, in reality—they assure us—time does not exist.