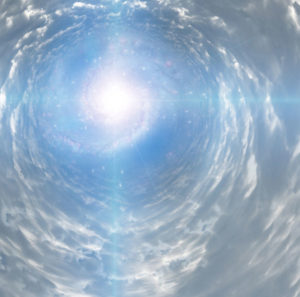 Out of body experience (OBE). The dying person’s “Self” (his/her spirit, mind, soul, life energy, consciousness, or whatever-you-choose-to-call-it) becomes consciously aware that it has emerged out of its body. Unfamiliar with this “separated” status, the experiencer may feel momentarily confused—a feeling commonly reported by many. Even though vision, hearing and smell are often reported as fully retained, the OBE experiencer usually sees but may not immediately recognize the prone body as its own. Any pain the body had been feeling is invariably absent as soon as the OBE begins.

If this takes place in a hospital, as so many NDEs do, the experiencer sees nurses and doctors rush into the room and frantically administer attempts to resuscitate the body. Very specific actions such as CPR and cardioversion (electric shocks to the heart) are often seen and remembered—and sometimes later are described in detail to disbelieving medics who typically insist “You couldn’t have seen that, you were dead!” In one celebrated case in England a man remembered watching a nurse put his false teeth in a crash cart drawer while he was in cardiac arrest—and caused quite a ruckus several days later when he asked for their return and described exactly where the nurse had left them.

In most cases the out-of-body Self rises above the body, and often finds itself hovering at ceiling level dispassionately observing the scene below. Most do not report being aware of this rising-up as it is happening, but often report a feeling of lightness or weightless floating. Experiencers sometimes notice that the Self’s “hands,” now immaterial, pass through material objects, such as walls and even other people who may be present. Some report noticing that the Self does not necessarily retain the human shape, and may instead be a nebulous sort of sphere, etheric in nature. Experiencers often notice that they feel no particular relationship to the body lying there—some describe regarding their body, without any particular affection, as an “old container” now discarded.

In some cases the OBE ends here—the Self feels a sudden “whoosh” and inexplicably finds itself instantly back inside the prone body, sometimes with an unpleasant sensation of being “slammed back in.” A feeling of being compressed or “squeezed” to fit back into the body is often reported. The return to in-body consciousness is often accompanied by return of any pain that was afflicting the body prior to the OBE.

But many NDEs do not end here—for many people the experience continues. If it does, the experiencer may undergo a few more—or several—of the features that can happen during an NDE. In extraordinary rare cases people experience the entire “dozen” (I use quotes because the precise number of NDE features presents definitional ambiguities where overlapping ends and beginnings occur).

It is important to note here that no two NDEs are ever the same. The many thousands reported over recent decades leave no doubt that every person’s experience is uniquely personal, and in some way(s) different from all other NDEs. Like the infinitely differing designs of snowflakes, a reasonable analogy could compare the faces and personal DNA of individual humans—no two are, or can ever be, exactly alike. As a stimulant to deeper thinking, let me just add that no two things in this entire wide universe are, or can ever be, precisely the same. Right down to the level of atoms and their parts, all is diversity. If the universe was designed, what would that say about the designer?

For present purposes, we’re now going to experience the whole “dozen” NDE features through the most carefully crafted descriptions I can muster.

1a. Exploring and ranging.  Whereas experiencers commonly report realizing they had left the body and were floating somewhere above in its immediate vicinity, some report going exploring. Such ramblings may be just near the body, but they sometimes venture far away. The experiencer typically reports a general unconcern that this is an unusual situation—most report instead a dispassionate curiosity. A few report feeling fearful.

Here are some typical examples. NDE experiencers often report unexplainable ability to see through walls, and into areas located in other parts of a hospital, even on different floors. Seeing family members down the hall in consultation with medical staff is fairly common. An experiencer who tries to console weeping loved ones quickly discovers that s/he cannot be heard by them. In one highly publicized case, the out-of-body experiencer “saw” and later reported a tennis shoe lying on a ledge outside the hospital wall, several floors up and around a corner not visible from any ordinary view. Subsequent search found the shoe exactly where it had been described.

Experiencers sometimes report “thinking” a desire to see a relative in a distant city—and instantly find themselves traveling to that distant relative’s location at a great and increasing speed sometimes reported as “the speed of light.” Return to the body’s location is also speedy—to think a location is to be there, what would normally be called teleportation. Quite a few extraordinary cases report the experiencer ascending up, up and away from the body’s location, proceeding high up into the sky—sometimes miles high, sometimes beyond the earth’s atmosphere, and in a few cases to faraway reaches of the universe—always accompanied by feelings of awe and wonder.

These travelings are typically reported in calm, matter-of-fact words that simply describe what was experienced, with no understanding of how it happened, much less why. In every case—since these are all experiencers who lived to tell about it—the experience ended when the out-of-body Self was suddenly returned into the body. Most returns are described as sudden and forceful, a “snap” often accompanied by pain and distress.

2. Meeting other spirits. Many NDE experiences meet, and communicate with, other spirits while out of the body. These spirits are called “other” because—it must be understood—the person having the experience is him/herself a spirit now experiencing conscious existence outside the body and the body’s brain.

When such spirit meetings may occur is highly variable. Sometimes a spirit (often two or more) appears as soon as the Self leaves the body, though this more typically happens later in the NDE, such as after the Self has emerged through a “tunnel” (to be described shortly). And sometimes it doesn’t happen at all—the entire NDE is experienced in solitary aloneness. Every NDE is different.

The perceived identity of such spirits varies considerably. Sometimes they are friends and/or relatives who are known to have previously died (and occasionally, to great surprise, not known to have died just in the past few hours). Identities of such spirits are always quickly recognized and reunions are typically accompanied by mutual joy shared.

Sometimes however the spirit is unknown, and perceived simply as someone who knows more about the spiritual realm than the experiencer. This is often reinforced when the spirit greets and gives advice, conducts a tour, or—as not infrequently occurs—identifies itself as the experiencer’s guardian spirit for this lifetime. It is not uncommon for the spirit to then be remembered as an unseen playmate from very early childhood. Not a few cases involve siblings who died before the experiencer was born and are now being “recognized” for the first time—always with accompanying joy, love and wonder.

And fairly often, at what I would call higher than average frequency, the spirit one meets is a well known religious figure. This requires some explanation. The spirit may be perceived as one’s unnamed “guardian angel.” Or it may be perceived as God, the creator of the universe. Or, in many cases, Jesus of Christianity. Or, in many others, the Buddha; or the prophet Mohammed; or the Hindu Lord Krishna; or indigenous deities such as the Maoris’ Hine-nui-te-po, goddess of night.

It obviously is significant—though not the least bit understood—that NDE experiencers of different cultures describe the spirits they encounter as familiar entities from their own respective cultures. The obverse is also true, e.g., Maoris guided along the “trail of death” by Hine-nui-te-po do not typically meet a spirit they would know as Jesus. There is much speculation about why this might be so, and no answers, but that it is in fact so is well documented in many reports from other cultures. After the whole NDE phenomenon has been considered, as we are proceeding to do, this unanswered question does not detract from a conclusion that such reported experiences are credible and very, very real.

3. Going through a tunnel. If an NDE continues after the initial awareness of being out of body, becoming aware of a tunnel is often the second thing that happens—typically after the Self has experienced some floating/rising above the body. When the experiencer notices the presence of a tunnel may or may not be preceded by “roaming about” or meeting other spirits. With proviso that no two tunnel experiences are ever reported in quite exactly the same way, the experience can be generically summarized as follows.

The disembodied Self becomes aware that it “sees” the entrance to what is almost always described as a large and very long tunnel. (“Large” is a relative descriptor—experiencers variously describe tunnel height as larger than themselves, sometimes so much larger they cannot see the distant walls.) The tunnel entrance is usually perceived as nearby, and the tunnel interior as ascending in an upward slope. In almost every case, perception of the tunnel is accompanied by realization that the Self is being “drawn” toward the tunnel’s entrance, an irresistible “being pulled toward” the entrance. Most experiencers emphasize the involuntary aspect of this motion. Though a few resist, it is consistently reported that being drawn toward and into the tunnel cannot be resisted, as if (many mention) some living force had taken control of he experiencer’s location and motion.

The tunnel interior is often described as dark or very dark—sometimes as a cave-like blackness with total absence of light. Some experiencers report seeing sparkles of light through the darkness, especially on the tunnel walls. Many report being alone in the tunnel—some describe an overwhelming feeling of aloneness. Others report awareness of being accompanied by other beings who, though unseen in the darkness, are perceived to be spiritual entities of some sort. These are not always perceived as friendly, and fright or even terror is occasionally reported. Indeed, passing through the tunnel presents so many different kinds of details they cannot be well summarized here. Suffice it to say that a majority of reports simply speak of a solitary passage through a large and very long tunnel…and being drawn toward “a light” at the far end.

This light is one of two features that stand out in passing-through-tunnel reports. The other is increasing speed. Whereas the venture typically begins with growing awareness of being drawn slowly into the tunnel entrance, a majority of tunnel experiencers report that they soon notice growing acceleration, such that they are soon streaking through the tunnel at a clip some describe as extreme, approaching light speed. And as this happens they realize they are quickly drawing nearer “the light at the end of the tunnel”—and that light is visually growing much brighter and larger as they approach it. It is almost always described as many times brighter than our sun—nevertheless the experiencer can look directly at it without visual distress. The light is also described as alive, and loving.