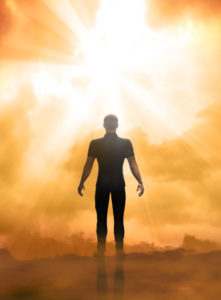 Unlike others described above, the nonconforming spiritual believers in this third group have, by virtue of their own existence, built up a large body of that scientifically essential phenomenon—credible evidence—which supports their beliefs in non-material things. Moreover, the things they believe are remarkably consistent. In fact, there is so much to say about this group and its credible evidence that it must have its own chapter.

The chapter title is self defining. You have an experience that is not an ordinary experience—it comes unexpectedly and powerfully. Of a decidedly spiritual nature, it is in some significant way(s) so non-ordinary that it causes you to become transformed. It claims your fullest attention while it is happening, and the memory of it remains strongly with you ever afterward. It leaves you deeply, fundamentally changed in some important way(s). The change is permanent, and you may change still more as time passes. What you experienced was of such compelling nature that your very values are changed—your spiritual outlook, the way you see life and the way you want to live it, everything.

You have had a spiritually transforming experience, an STE.

Every day of every year, thousands of people have spiritually transformative experiences, with consequences that are dramatic, that significantly change their lives. And it has ever been so. Though you don’t hear much about it—not in the newspapers, not in church—people have been having such experiences down the ages from antiquity through all history, and right down the street only yesterday. If you learn much about STEs it likely will happen because something piques your interest, you pursue the subject and discover the many books and websites devoted to it. Or you directly experience an STE yourself.

Probably the most widely known type STE is the near-death experience (NDE). Public familiarity with NDEs has virtually exploded since Raymond Moody’s book Life After Life was published in 1975. Not so well known is that many of the features common to NDEs are sometimes experienced by people who are perfectly healthy and wide awake. Spiritually transforming experiences also come in the form of shared-death experiences, lucid dreams, mystical visions, and experiences of spiritual presence. Still other types of “felt” inner experiences—often perceived as contact with a spirit or a spiritual realm—can make deep impressions that lead to permanent changes in outlook, values and beliefs.

Most discussion here (but not all) focuses on near-death experiences simply because they have been so thoroughly studied by researchers adhering to scholarly scientific research standards. As a result NDEs are extraordinarily well documented and described, a unique database that has grown to enormous proportions over recent decades. I shall also devote some space to my own spiritually transformative experience(s), sharing thereby why this subject has so intensely interested me over a long lifetime.

This discussion concludes with the various transformational effects that can occur after an STE (and sometimes multiple STEs) has been experienced. Aftereffects are the most important aspect of this chapter’s topic, because they illistrate why STEs are important—in contrast to so much related discussion which merely describes what happens and how it happens. What and how are certainly fascinating, but the point here is to meaningfully understand these matters in relation to our society, and our roles and purpose in society. To achieve understanding, perhaps even some wisdom, we must grasp the why.

Three categories of NDEs should be distinguished. In the first, the experiencer comes “very near” to dying—may even be in a coma for some time—but does not quite complete the dying process and sooner or later gets resuscitated. Many of these people write down the interesting things they consciously experienced while they were near death, and their writings find their way to interested readers like us.

In the second type the person actually does die. The body proceeds to clinical death—defined as no heartbeat, no breath, and no electrical-nerve activity in the brain stem as confirmed by a flat-lined electroencephalogram (EEG)—but medical efforts, often using advanced technology and procedures, restore life to the dead body. This is technically not a “near” death experience as, by all known measures, the body actually died—and would have stayed that way if not for the advanced life-saving procedures now routinely applied in cardiac care units. But please note:  some people simply revive, for reasons unknown, without benefit of medical intervention. These NDEs are grouped with “near” deaths only because survival, explained or otherwise, enables the person to live to tell about it. Here too, we learn about these only because some experiencers bother to write them down.

A third type called a “shared NDE” occurs when a healthy person who is attending a dying person partly shares the experience of the dying person. Some of these too get written down, and so we learn that such unusual things are happening around us.

A person having any of these experiences may encounter up to a dozen or more features that are common to all three categories. Describing these features is central to this book’s purpose because so very many people—tens of thousands in fact—have experienced them and more are happening this very day. On this exceedingly well documented fact lies the case I will make that the extraordinarily large body of STE reports constitute written documentary evidence of consciousness beyond bodily death. The evidence is credible by scientific standards, and should be so recognized and treated.

Who has these experiences?

Self evident to the case of scientific credibility is the absolutely democratic nature of the affected population. NDEs and STEs recognize no social distinctions. They happen to rich people, to abjectly poor people, and all levels in between. They happen to anti-religious scientists and to anti-scientific religious believers, to fundamentalists and to atheists. They happen to scoundrels and saints. To citizens of every nation on earth. To people who believe in ghosts and to people who don’t. To young toddlers and old elders and all ages in between. To amazed preachers who speak constantly of spiritual things they thought they “knew all about” and to non-believers who wouldn’t set foot in a church for love nor money. They happen to people in brothels, in convents and in jail.

It has been well and long established that these unusual near-death and spiritually-transformative experiences come alike to rich and poor, wise and foolish, believers and atheists—a completely representative cross section of society from which nobody is exempted on account of race, education, gender, sexual orientation, age, or any other basis whatsoever. What I have not so far mentioned is the nature—the quality—of the telling of their stories. The way these experiencers deliver their stories, in everyday language, is both commonplace and extraordinary. More, it is convincing.

They live all over the map. They don’t know each other, and collusion is out the question with so many thousands of people involved. They have no reason to be exaggerating much less lying. Some are experienced writers but most are not. They all obviously struggle to describe what happened and how they experienced it. Their reports represent honest efforts to describe in words many things that cannot be expressed in words.

Why should anyone bother to read hundreds much less thousands of reports by people claiming that they died or nearly died, were revived and restored to life, and are now anxious to tell you all about the fantastic things they experienced during that brief interval between dead-or-almost-so and return to living consciousness? Where does believability end and gullibility begin?

In my considered opinion the great body of these reports cannot be adequately appreciated until a great many have been read so the commonalities among them become apparent and consciously recognized. I invite anyone to read through not less than fifty NDE reports in one sitting—and fifty more at the next sitting. Repeat. Confident that few will take this good advice, I share here my own aggregate impressions about the enormous number of such reports I’ve read and considered over nearly a half century.

Following are the several interesting things that may happen during a so-called near-death experience, including actual flat-line death followed by medical resuscitation.