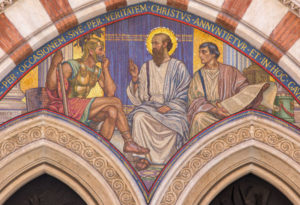 The New Testament is filled with Paul’s fervent exhortations to churches struggling with doctrinal misunderstandings, and their leaders’ endless differences of opinion on what should be considered “true belief.” It seems this problem arose in the new churches everywhere. With the early Christians’ doctrinal disputes shooting off in all directions, we can be certain the self-appointed disciple known by some moderns as the Apostle Paul and by others as Saint Paul most assuredly had his hands full.

After his beheading rendered him an early Christian martyr during the reign of the Emperor Nero, it fell to the churches themselves to work out what were to be final-draft doctrines of Christianity. How, you are justified in wondering—given the conglomeration of subdividings we see about us on all sides today—did that work out?

It worked out with severe complications over the first four centuries CE, when the subdividings were considerably worse than they are today, if you can believe it. New Testament scholar Bart Ehrman has produced a meticulously researched and convincing record of the growth of early Christian congregations, detailing the evolution of their doctrinal interpretations, misinterpretations and diversifications that began soon after Jesus’ death. Reference to Ehrman’s growing list of authoritative books and articles et cetera will be enlightening to anyone interested in more detail than can be included here. For example, he introduces his book Lost Christianities: Christian Scriptures and the Battles over Authentication with these words:

As Ehrman notes, Christianity is no monolith and never has been. Compared to the wide diversity of doctrinal beliefs among modern Christian denominations and sects, the extreme diversity among Christianity’s early churches is breathtaking. With different beliefs exceeding the things they believed in common, some were truly bizarre. The Ophites, for example, regarded the snake who tempted Eve with the apple of knowledge as a hero, and are said to have loosed snakes among the loaves on the communion table during their worship services. Their fascination lives on, though with evolved rationale, in modern Appalachian snake-handling sects.

Marcionites—like the more modern Shakers—insisted on extreme celibacy. In contrast, a sect called the Carpocratians were disparaged by Iranaeus, Bishop of Lyon, for the extreme opposite. They were said to pride themselves on being above human moral conventions, and believed they should pursue everything that can be experienced in one lifetime—including immorality—so that they could stop reincarnating to experience what they had missed in their reincarnations so far.

During those first two centuries the many churches that came into being around the Mediterranean all believed themselves Christian, but their plethora of doctrinal differences presented more diversity than unity. As they mutually competed to prevail over what Ehrman calls orthodoxy—“right belief”—all were equally intent on putting down heresy, the label by which each group rejected all beliefs other than its own. Most could “prove” their doctrinal authenticity by pointing to “authoritative” writings alleged to have been penned by the original apostles (a few were, most were not). (This lip service to apostolic authority is ironic given that its invocation was by followers of Paul who were in fact unexposed to first-hand experience with either Jesus or his apostles.)

By the third century this mess had generally resolved (though never completely) into three groups of influential competitors:  Ebionites, who clung to their Jewish identity while professing the Pauline doctrines about Jesus;  Marcionites, who rejected everything Jewish from their understandings of the teachings of Jesus;  and the Gnostics, a group with highly diverse beliefs who, in common (mostly), held this world to be an evil place of imprisonment from which souls could escape only by learning the truth of their identity through the “secret teachings” Jesus had mysteriously left behind.

All the above and more constituted what Ehrman calls “proto-orthodox” Christianity—which is to say, they were all “proto” and any one of them might become the dominant orthodoxy of Christianity that eventually would reign (mostly) through the ages. Ultimately of course only one version actually “did” eventually prevail over all the others. And that victor—writing the history of “what really happened” as victors do—branded all the losers as heretics. Thus the competing proto-orthodoxies at last resolved into one victorious orthodoxy that prevailed over all others and defined Christianity.

As you will have guessed, that victor was not the Phibionites. The victorious orthodoxy consisted of the beliefs of the large and well funded Christian church in Rome. Well placed at the center of Roman governance, with many prominent Romans as members, its preacher-priest would come to be known as the Bishop of Rome—a title retained today by the Vatican Pope. It is thus unsurprising that the Roman church’s doctrinal beliefs eventually became “more equal” than the far flung Christian churches scattered about the Roman provinces, or that it came to wield dominant influence over periodic inter-church conclaves held to determine, by vote, what were to be “the only true” Christian doctrines.

Lingering inter-church divergences were officially resolved—as much as such things can ever be resolved—after the Roman emperor Constantine himself became a Christian in 312 CE. One year later his Edict of Milan legalized Christianity, by which action the ancient freedom to worship the gods of the old Greco-Roman pantheons however one wished was expanded to include freedom of Christian worship throughout the empire.

Fifteen emperors later, in 380 CE Theodosius I declared Christianity to be the one and only official religion of the Roman empire. This action not only raised Christianity’s status to official state religion, it displaced the old Greco-Roman pantheon, which then became redefined as “pagan.” Consistent with the history of Christianity’s spread everywhere, the pagan label soon came to mean anything that is “non-Christian.” Thus ended freedom of worship for anything other than Christianity, a condition that would prevail throughout Europe for most of two millennia under enforcement by the now-official Roman church and the Christian soldiers it would soon control across Europe.

Two events stand out for their significance in imposing uniformity of Christian doctrine that would minimize diversity of beliefs for the next thousand years—that is, until the protestant reformation opened the floodgates to its resumption. One is the Council of Nicaea conducted in 325 CE (in present-day Turkey). Convened by the same emperor Constantine, the Council brought together the first-ever ecumenical (universal) conference of Christian bishops. Among other outcomes, this important conference established the uniform Christian doctrine to be known thereafter as the Nicene Creed—and thereby finally achieved the core standardization after which Paul had so struggled.

Today it remains the only central statement of faith accepted by essentially all branches of modern Christianity. This remains true even though its exact wording—as you will have guessed—has been slightly re-stated countless times, with numerous per-word variations and nuances, of which the following may be considered one version:

We believe in one God, the Father almighty, maker of heaven and earth, of all things visible and invisible. And in one Lord Jesus Christ, the only Son of God, begotten from the Father before all ages, God from God, Light from Light, true God from true God, begotten, not made; of the same essence as the Father. Through him all things were made. For us and for our salvation he came down from heaven; he became incarnate by the Holy Spirit and the virgin Mary, and was made human. He was crucified for us under Pontius Pilate; he suffered and was buried. The third day he rose again, according to the Scriptures. He ascended to heaven and is seated at the right hand of the Father. He will come again with glory to judge the living and the dead. His kingdom will never end. And we believe in the Holy Spirit, the Lord, the giver of life. He proceeds from the Father and the Son, and with the Father and the Son is worshiped and glorified. He spoke through the prophets. We believe in one holy catholic and apostolic church. We affirm one baptism for the forgiveness of sins. We look forward to the  resurrection of the dead, and to life in the world to come. Amen.