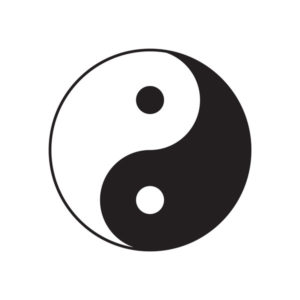 Sixth oldest among surviving world religions, Taoism emerged from Chinese folk traditions much the same as Confucianism and similarly is best conceived as ethical-philosophical teachings that advocate humility and a religious level of piety. Taoism in its early forms was a mixture of mythology, folk religion and philosophy. Over time it developed into a complete philosophy of life encompassing social action and health as well as religion, and was the designated state religion under the Tang Dynasty (7th to 10th centuries).

Emerging in the sixth to fourth centuries BCE, Taoism can today be traced to a fourth century BCE writing (the Tao Te Ching) of the mythical sage Lao-Tzu who is thought to have been a contemporary of Confucius. The Tao Te Ching is remarkable for citing extremely ancient references such as the godlike “Yellow Emperor” (reportedly 2697–2597 BCE) and the I Ching (Book of Changes) dating to about 1150 BCE. For the most part Taoism’s sacred writings focus on the importance of a simple and balanced life in harmony with nature.

Numbers on modern Taoist adherents are not reliable;  estimates range from 12 million to over 300 million in mainland China. In Taiwan between seven and eight million people—one-third of the population—are known to identify as Taoists. Though Taoism has no God equivalent to the Abrahamic religions, core beliefs hold that the Tao is the origin and law of all things in the universe, making all life and motion in nature possible. It was the interpretation of Tao in the Tao-te-Ching that developed into the Taoist philosophy —the absolute principle underlying the universe and combining within itself “the way” (code of behavior) in harmony with the natural order. The universe is said to spring from the Tao which impersonally guides things. By practicing certain rituals and austerities, people can return to heaven when life is lived out to become deities or live forever.

Philosophical Taoism has complex relationships with Buddhism—they influenced each other in many ways, often while competing for influence. Taoism holds many beliefs in common with the Ch’an (meditation) form of Buddhism which inspired the Zen school of Buddhism in Japan.

Counted as the world’s seventh oldest religion, Buddhism was emerging in India at virtually the same time (6th – 5th century BCE) as was Taoism in China. And like Confucianism it has a well known history stemming from a prominent historical figure, Siddhartha Gautama, later to become known as the Buddha. Passing over the interesting details of Gautama’s life and travels, suffice it to say that Buddhism became established across India’s northern regions—most likely in present-day Nepal—before spreading northward into Tibet and southward across southeast Asia. Codification of Gautama’s teachings began soon after his death.

Buddhism is widely practiced around the world today. Estimates of Buddhist followers range from 376 to as many as 535 million people worldwide, making it the fourth largest contemporary world religion. His Holiness the Dalai Lama, revered leader of the Mahayana Buddhist tradition, presides today at Dharamsala in northern India, having fled Chinese occupation of Tibet as a teenager. Other sects of modern Buddhism include the Theravada and Vajrayana traditions, which display substantial differences in their beliefs.

Buddhism tends to characterize reality in terms of relationships and processes rather than entities and substances. Buddhist teachings hold that nothing is permanent or fixed, and that change is always possible. Its basic doctrines persist to the present day as “four noble truths”:  1) existence is suffering;  2) the causes of suffering are craving and attachment;  3) there can be a cessation of suffering;  and 4) cessation of suffering can be attained by following the eightfold path:  i.e., right views, right resolve, right speech, right action, right livelihood, right effort, right mindfulness, and right concentration. Buddhism contains no belief in a god but is fully invested in the ideas of karma and reincarnation. Attainment of Nirvana, a place of ultimate happiness and peace, is the highest attainable state, a perfect enlightenment where individual desires and suffering are no more.

Shinto, eighth-ranked and least-old among the ancient religions, has no specified founder but descends directly from the Yayoi peoples of Japan’s southernmost island, Kyushu. Though ancient Yayoi culture and animistic folk religion spread northward to the rest of Japan after the third century BCE, Shinto did not become codified until around 712 CE—and then only in response to pressure from the “foreign” mainland religions of Confucianism, Buddhism and Taoism. (In western contexts Shinto is often referred to as “Shintoism” to convey Western perceptions of “religion.”) With approximately four million adherents, modern Shinto ranks as ninth-largest among contemporary world religions.

Though a majority of modern Japanese profess Shinto as Japan’s ethnic religion, only a small minority actually regard it as a religion. Its animistic folk origins highlight the belief that spiritual powers are manifest in all natural places such as mountains, rivers, and other aspects of nature. It thus has many spirits. Shinto is easily misunderstood by Western minds because it emphasizes ritual rather than belief, and the ritual is simply an aspect of Japanese life that the Japanese people do not equate with religion.

Its core teaching has to do with worship of ancestors and natural forces in pursuit of harmony in every dimension, which includes the numerous traditional beliefs in spirits. Ritual practices include divination, shamanic healing and spirit possession, mostly arising from ancient local traditions though some come from Buddhism, Confucianism or Taoism. Humans are thought to be fundamentally good, whereas evil spirits cause the negative things in life. Ritual prayers, offerings and purifications are extended to keep evil spirits away. Modern Shinto has been considerably influenced by Buddhism.

To BC or BCE, that is the question

At this point we cross a significant international dateline of sorts. Since late Roman times a perception of the dividing point between deep antiquity and relative modernity arose slowly in Christian-European consciousness as being the birth year of Jesus of Nazareth.

Thus, for much of the past millennium, year designations came to be identified as either “BC”—meaning before Christ—or “AD”—Anno Domini, meaning after “the year of [the birth of] our Lord [Jesus].” Anno Domini had become widely used throughout the Christian theocracy that dominated Europe by the year 900. (But only in Europe—quite different ways of designating time held throughout all other continents with their own ancient traditions.)

The use of BC, “Before Christ,” took a while longer to settle in given the theocracy’s limited interest in events before the Christian era. Implicitly intended in both usages was unspoken acknowledgment of “Christ as Lord” and of Christianity as triumphant over its (mostly “pagan”) competitors—at least in Europe—for human hearts and minds.

In the later 20th century, academic and scientific publications began substituting the posterior-anterior terms “before common era” (BCE) and “common era” (CE). This reflected modern sensitivity, among scholars at least, who lacked reason to presume time started anew with the advent of Christianity. Thus 340 BC became 340 BCE, and 1215 AD became 1215 CE. But in deeply Christian circles, these new usages rankled.

Largely unknown to all concerned was that the “common era” distinction traces back to at least the year 1615 when it appeared in a book by Johannes Kepler, the discoverer that planetary orbits are elliptical, not circular as assumed since antiquity. In further point of fact, the “common era” terminology was appearing in English publications as early as 1708, and was widely used by Jewish religious scholars by the mid-19th century.

Of such trivial nuances are human emotions set ablaze and ever more dividings of humanity created.