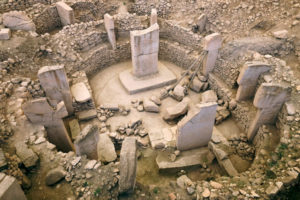 The world’s oldest religions—there are eight of them—all originated before the common era (BCE), beginning sometime around the middle of the second millennium BCE, about 3,500 years ago roughly speaking.  In sequence of their appearance, they are Hinduism, Zoroastrianism, Judaism, Jainism, Confucianism, Taoism, Buddhism and Shinto. All eight of these oldest religions took root in Asia, variously between the Levant and Japan.

Two other religions that survive to the present day, Christianity and Islam, originated later, in southwest Asia, after the Common Era had begun. No other organized religion of any significance originated in Europe or further west until modern times. (It must be noted however that “unorganized” religions—such as the Celtic, Norse, Greek, Pacific-Oceanian and Amerindian—abounded everywhere humans lived in large numbers.)

Context is needed for our discussion of direct-experience versus faith-based ways of knowing, so a few details follow concerning the oldest religions still alive and thriving in the world today. Interestingly, belief in the existence of God, or a god—the central feature of what Western peoples commonly think of as “religion”—is by no means universal. Whereas four of these old religions are indeed “mostly theistic,” i.e., grounded in some understanding of a divine creator, some include “polytheistic” acceptance of multiple gods and a few encompass some non-theistic sects.

In contrast, Buddhism and Jainism are primarily “non-theistic”—they lack belief in a divine creator and regard the universe as timeless, without beginning—while secular Confucianism and Taoism elevate the ethics of human conduct to religious status. In all four cases their silence on God differs in kind from atheism, which means “without reference” to religion, even though a subset of atheists (they subdivide too) are actively hostile to religion. The following ranking by age on the world stage differs substantially from a ranking by contemporary numbers of adherents to be presented subsequently.

The world’s oldest organized religion arose on the Indian subcontinent during the thousand years from 1,500 to 500 BCE. Though Hinduism lacks an organized structure or distinctive unified beliefs such as characterize Christianity, all Hindus follow ancient Indian traditions. Multifarious in their diversity and flexibility, they have retained a central, roughly similar context into modern times. The Vedas, Hinduism’s four oldest scriptural writings compiled between 1500-500 BCE, ensure Hinduism’s status as the world’s oldest organized religion. The Vedas have proven able to absorb schismatic tendencies and retain a broad following of believers.

With 900 million to a billion present-day adherents Hinduism is the third-largest religion in the world today. Mainly theistic, it teaches that there are multiple paths to reaching God, i.e., the deity known as Brahman (other gods and goddesses are recognized). Hindus believe all creatures have a soul (atman) and all souls are parts of one great supreme soul. Other central beliefs include the universal law of cause and effect (karma) and the continuous cycle of life, death and reincarnation (samsara). A mortal goal is to achieve salvation (moksha) thereby ending the cycle of rebirths and joining the supreme soul.

Believing that one’s conduct and “private” thoughts directly determine the quality of one’s present and future lives, Hindus strive for a way of life that emphasizes morality and good conduct. They revere all living creatures and regard the cow as sacred. Most are vegetarians, eschewing especially beef and pork. This old religion embraces so many ideas it is often referred to as a family of religions or a way of life rather than a single organized religion.

Scholars generally agree this ancient Indo-Iranian religion, the world’s second-oldest, arose in ancient Persia from the teachings of the reformer-prophet Zarathustra some time between 1,000 and 500 BCE. Over a millennium and more it prevailed as a state-sanctioned religion through several Persian empires, until subordinated by the Muslim conquest in the seventh century CE. Thereafter Zoroastrianism found ways to reconcile its belief in reincarnation with teachings of the Abrahamic prophets. It was extremely influential over later development of the Abrahamic faith traditions as they appear in the Old Testament. For example, Zarathustra’s original teachings included the existence of angels, demons and messianic saviors, ideas that likewise were later adopted and passed down through Judaism, Christianity and Islam.

With 2.6 million followers in modern Iran, Iraq and India, Zoroastrianism ranks tenth among today’s major religions. Three variants—blended somewhat with Islam and a bronze-age Zoroastrian precursor in Mesopotamia—likewise survive in modern Kurdish areas. Modern Zoroastrianism teaches a dualistic good-and-evil cosmology in which evil is ultimately vanquished. Monotheistic and faith based, its one god Ahura Mazda (Wise Lord) is worshipped as the just and compassionate creator of the universe. Its sacred text, the Avesta, contains hymns and worship rituals including spells against demons.

The world’s third-oldest religion, Judaism arose in the ninth century BCE in the ancient Levantine tribal kingdoms of Israel and Judah. Strongly influenced by the monotheistic teachings of Zoroastrianism and still older Egyptian sacred ideas known as Atenism, Judaism was among the earliest religions to embrace the idea of “one true God” as later codified in the Old Testament. By the sixth century BCE Judaism had substantially evolved away from worship of multiple gods, becoming the deep monotheistic base from which three separate Abrahamic traditions would eventually arise to modern times.

Modern Judaism, now evolved into an ethnicity as well as a religion, has an estimated eleven to fourteen million adherents making it the world’s fifth-largest modern religion. Combined with the Christian and Islamic religions that arose out of Judaism, these three Abrahamic descendants total about 3.8 billion adherents, thus constituting about half the world population—all committed to monotheism. It would not be accurate to designate modern Judaism as based on faith since, unlike the other two, it has no dogma or particular beliefs one must hold to be a Jew. Jews deem actions to be far more important than beliefs. Basic teachings of religious Judaism hold that the one true God is a unity, a “whole spiritual being” who created the universe and subsequently controls it.

Religious Jews (many Jews are “ethnic” but not “religious”) consider Judaism per se to express an original covenant of God with the Children of Israel. Judaism’s wide body of texts, practices and forms of organization encompass Written Torah (first five books of the Bible) and Oral Torah consisting of teachings preserved in the Talmud and other writings. Unlike most religions, Judaism lacks much focus on abstract cosmological concepts and has substantial room for personal opinion on most matters.

Jainism is the world’s fourth-oldest organized religion, with obscure origins thought to date between the eighth and second centuries BCE in the Ganges basin of eastern India. Archeological proof of its existence dates only to the second century BCE. Jainism was dominant in parts of India until the seventh century CE when “reform Hinduism” swept powerfully across the subcontinent. Modern Jains are estimated at more than four million in India and as high as seven million worldwide, making it the eighth-largest world religion today. Scholars agree that its long term influence on the Indian population has been far greater than these numbers suggest.

Jainism has similarities with Buddhism, with which it was a rival at the time both were becoming established. Depending on how “God” is defined, Jainism can be regarded as atheistic, trans-theistic or polytheistic. Belief in God as creator of the universe is absent, though Jainism does have a concept of God as perfect being. Jains ritually worship as deities those souls who have overcome all karma by conquering inner passions (e.g., pride, anger, greed) to “realize pure self.” Jainism has a concept of karma, for which defining characteristics are self discipline and purity of conduct to modify karma and obtain release from it. Jains consider body and soul (jiva) to be different things, the body being a mere container which the conscious, living jiva inhabits and animates.

Jains consider their religion eternal, though it is not immune to the self dividing that so characterizs all religions. Its great schism between the third and fifth centuries BCE resulted in two main sects, the Digambara and the Svetambara (each further divided into subgroups), that survive to the present, agreeing on Jainism basics but disagreeing on details.

The world’s fifth-oldest “religion”strains the definition of religion. It traces directly to the fifth-century Chinese sage, politician, teacher, and philosopher Confucius, whose life (551–479 BCE) is unusually well documented. The tradition grown up around Confucius’ name probably should not be called a “religion” or grouped with religions, for his teachings were in fact more ethical and philosophical than religious. Nevertheless it is.

Remembered all these centuries for his great practicality, Confucius maintained he was merely the latest representative in a scholarly tradition dating from an earlier golden age in China. Confucius never claimed divinity, nor have scholars historically treated him as other than a great teacher and sage. His teachings have at times been expressed as official ideology of the Chinese state, but never treated as a religion. Nevertheless, his teachings as compiled after his death fit comfortably within Chinese folk traditions than can accommodate a supernatural worldview including a heaven and a high lord.

Persisting through periods of historical popularity and unpopularity, Confucianism survives as a folk-spiritual tradition claimed by about six million adherents, seventh-largest among modern religious populations. Beliefs of the Confucian heritage are practiced today in China, Taiwan, Korea and Vietnam as well as the Chinese and Vietnamese diasporas. Teachings focus on humanistic models of family, public life and educational standards intended to develop individuals morally and improve the community and world as whole. Mirroring the Golden Rule, Confucianism’s “Silver Rule of Behavior” advises that anything you don’t wish to choose for yourself should not be imposed on others. Evolved Confucianism today includes a cosmology of the universe as an ordered system in constant chaotic flux.