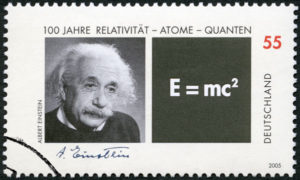 As we approach our own thought experiment, let us understand:  Just what was so important about this “relativity” idea Einstein came up with—this “paradigm change” that brought about “the most drastic changes in world history of human understanding about the nature of reality?” What is the big deal? Be patient and read carefully through the following explanation—it’s not hard to understand, and is important for understanding what this book will later have to say about human purpose.

There are several different angles of approach to understanding the colossal significance of what Einstein did. Probably the most popular, for obvious reasons, is that his ideas enabled others to invent the atomic bomb—and thereby forever change the nature of humanity’s responsibility over the technologies we adolescent homo sapiens now so irresponsibly invent simply because we can. From another angle his iconic formula…

…appears so ubiquitously in modern culture that some get the misimpression they know what it means simply through familiar recognition. Few things could be less true. Even now a hundred years later, relativity is not widely understood, not is it completely understood by any single person, not one, among the relative few who study it deeply.

The real significance of relativity lies in another direction. Literally hundreds of mathematical equations can be derived from Einstein’s basic relativity equations. Though these lead to many different meanings and understandings, relativity is best and most easily understood as revealing two broad categories:  the very small and the very large.

His ideas on the category of very small things, later known as “special” relativity, were published in 1905. They concern energy manifesting itself in various forms from the atom on down, as follows. An atom consists of a nucleus surrounded by one or more electrons, both the nucleus and the electron(s) being different forms of the same thing—energy. The nucleus consists of energy in two other forms comprising protons (one or more) and neutrons (one or more). The number of protons in a nucleus determines which of the elements that atom represents, such as hydrogen  (one proton), iron (26 protons) or uranium (92 protons).

Protons and neutrons are in turn made up of infinitely tinier snippets of energy in yet another form whimsically known as “quarks.” There presently is no known form of energy smaller than a quark, though two generations of particle physicists have slogged through nearly a half century of futility trying to prove the existence of a still tinier manifestation of energy dubiously named “string theory.” String theory remains resoundingly unproved and many physicists consider it unprovable.

Moving to the other category, very large things, Einstein published in 1915 “the rest” of his ideas on the subject that has become known as “general” relativity. It is concerned with everything in the universe that is bigger than an atom. From a two-atom molecule right on up through gravel, people, planets, stars, galaxies and galaxy clusters, everything big responds to gravity. Indeed, it is gravity that causes these large bodies to form themselves—to self organize—out of heavenly dense clouds of gaseous atoms.

To scientists, this is unacceptable. How can two ingenious ideas, each so utterly correct in their respective sections of the little-to-big continuum, refuse to cooperate at the point where they meet—where one atom stands alone (tiny) and two atoms become a molecule (big)?  Everything bigger than an atom, from the molecule up to the hugest galaxies, is called “matter” even though every big thing is actually made of the very small atoms which are, definably, “nothing but” energy—with a whole lot of “nothing” space inside.

So what is this energy thing, really?  Since all the big things in the universe are made up of atoms (which are themselves “nothing but” energy), the big things too are really nothing but energy—even though we speak of them as being made of “matter,” as if that were somehow a different thing, as if it were “not-energy.” The fact is, everything in this wide universe is really just immaterial energy manifesting itself in a great many different forms, some of which we arbitrarily call “matter” because they seem to be material, like that oak table top. Doesn’t this strike you as quite an interesting departure from our ordinary human way of thinking?

Adding to the mystery—and for no apparent reason whatever—nothing in the universe can travel faster than the speed of light. Well—we should ask—why not? No planet, no debris from an exploding star, no microwave, no excited-speeding gamma ray from a supernova can go faster than 186,000 miles per second. Only light can travel at this great speed. In fact nothing can even go quite as fast as light—an accelerating object can, with great expenditure of energy, come within an infinitely thin hair’s breadth of the speed of light, but it can never quite get there. And this cosmic speed limit is absolutely true—Einstein’s relativity equations prove it is so. But they certainly don’t tell us why.

So now, knowing a tad about a few details of relativity, we’re better prepared to entertain the question of human purpose upon the earth. Anyone who doesn’t regard this claimed connection as odd cannot be thought completely normal—and yet this odd connection is indeed integral to our inquiry. Our task is to clarify, to understand, why this is so.

As it happens, the thought experiment is an ideal method for pursuing knowledge and understanding about a cluster of the great questions:  Does a person’s “self” continue to live after the body dies? Does our “conscious mind” exist outside the brain? These two questions alone imply a host of others, but to keep things manageable let’s focus on just these for the moment.

Most scientific inquiries begin with some speculation about possible answers to the question at hand. One imagines that the answer to the research question “might be this,” or “might be that,” it might be any of several possibilities one’s imagination can produce—or something else entirely. The important point here is that almost everybody initially speculates on possible answers to any question. This is not the devil’s work, it is good science to think up and consider possible answers;  doing so tends to trigger ideas about how to approach one’s research. A few hard cases grouse that speculation has no place in science, but all honest scientists agree that they do it.

Accordingly, we now need to think up (imagine; speculate on) one or more possible answers to these two questions:  Does a person’s “self” continue to live after the body dies? Can what we call our “conscious mind” exist outside the brain?

Answering No presumes that the Self dies when the body dies, that the concept of “mind” is synonymous with “brain” because mind and brain are one and the same thing. But can we know whether this is true? No, we absolutely cannot know this, for science  has no way to prove a No answer true. If you don’t know, you don’t know, and it certainly is bad science to act as if you do know—it is in fact dishonest. Nevertheless, there are many professional scientists of otherwise good repute standing in quite a long line to vouch that they “know” a person’s “self” does not continue to live after the body dies. What we call our “conscious mind” cannot possibly, they say, exist outside the brain. Some simply cannot bring themselves to the honest compromise of “I don’t know.”

For here and now, our only honest posture is the certainty that we do not know the answers to these two questions. And we know that nobody else can know either. We can be certain of only two things:  the answer could be Yes or No, and there is no definitive physical proof one way or the other. Complete honesty requires the agnostic “I don’t know.” Imagining either a Yes or a No answer requires some speculation—and such speculation had better reflect a pretty well informed background context. We don’t want mere quick-fried opinions—the work of ignorance—no, we want exceedingly good opinions, ideas worthy of our intention to produce meaningful, high-quality speculation.

In a Yes scenario the non-material concept we call “mind” is independent of the physical “brain”—mind resides somewhere else out there, and thus “Self” lives on after the body dies. The mind merely uses the brain, acting through it, but does not “arise from” the brain, for mind/self and brain are not the same thing at all. Can we know this “Yes” answer is true? No, just as with our No answer we cannot know such a thing—unless we have experienced Self consciousness after the body and its brain died. A person who personally experienced conscious thinking after bodily death would most assuredly know that the mind is not a product of the brain that now lays there dead.

Has anybody had such an experience? Yes. Tens of thousands attest that they have experienced consciousness after bodily death. Still others report full consciousness during experiences that took place separate and apart from a perfectly well and healthy body. Is there any reasonable “evidence” that backs up these assertions? Yes, indeed there is, and in due course we shall examine that evidence in detail.

So with these thoughts in mind let us speculate about human purpose. We will use our thought experiment for rational imaginings the same way Einstein approached speculative concepts in his mighty imagination. Just as he grounded his imaginings on good evidence built up by others over decades before his time, our imaginings are grounded on a great mass of good evidence to be discussed in due course. And as we proceed to speculate in this disciplined way let us wonder:  Was Albert Einstein’s imagination really any better than yours or mine?