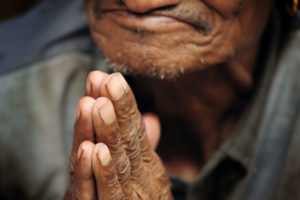 Religion—which is to say, all religions rolled together and considered as one vast human institution that manifests with infinitely nuanced details—presents two concerns. One is how people should relate to each other—behave toward each other, treat each other. To simplify things let’s call this the “Love Humanity Mandate.” Probably its all-time best expression as a guide to human conduct is The Golden Rule, which provides all the guidance you’ll ever need in this lifetime concerning your relations with other people.

The other concern is how people should relate to The Divine—however “Divine” may happen to be contextualized in all those circles you just drew. Examples that will be familiar to Western readers include: 1) a Sistine-Chapel Graybeard who controls people and events and demands to be worshipped or else;  or 2) as the natural ecology of Gaia and her creatures including human creatures;  or 3) even as an abstract idea about the Unity Of Everything, every atom and everybody. All three are the “Love God Mandate.”

The conglomeration of world religions reflects both concerns, though in differing measures. For example, the three Abrahamic religions place enormous emphasis on the Love God Mandate. In contrast, while all three also profess concern for the Love Humanity Mandate, their behaviors de facto through history—i.e., constant malice and frequent violence toward fellow humans—reveal this emphasis to be far inferior to their emphasis on obeisance to an all-powerful God that in expression is often more fearful than respectful or loving. Other world religions tend to more balance between the two mandates, though their Love God Mandate tends to lean strongly to the abstract God-as-Nature and God-as-Unity-of-Everything. A few religions have no god at all, yet fully qualify as religions and attract millions of followers.

Wherever the Love God Mandate applies, religions’ mindfulness of their particular deity(ies) is usually fairly strong. On upholding the Love Humanity Mandate, however, religions of every ilk tend to sin and fall short, such that examples of inter-religion malice are common:  Jewish Israelis versus Islamic Palestinians; Hindu versus Muslim Kashmiris; Sri Lankan Tamil Hindus versus Sinhalese Buddhists; Burmese Buddhists versus Rohingya Muslims; pro-life Christians versus pro-choice Christians.

The Perennial Philosophy, a concept that all world’s religions “have in common,” reflects and expresses an emphasis on the abstract Love God Mandate—the central idea being that all world religions have, at their core, a common idea of the centrality of “an all-powerful divine creator.” Focus on loving humanity, however, is not prominent. Generally described more long-windedly as “a spiritual perspective that views all world religious traditions as sharing a single, metaphysical truth or origin from which all knowledge and doctrine has grown,” it also long-windedly is “the perennial wisdom that stands as the transcendent source of all the intrinsically orthodox religions of humankind—the perennial religion that lives within the heart of all intrinsically orthodox religions.”

In his 1945 book titled The Perennial Philosophy, Aldous Huxley popularized several ideas, all representative of the more abstract universe-creator Love God Mandate:  i.e., that there is a Godhead or “Ground” which is “the unmanifested principle of all manifestation”;  that the Godhead is transcendent and immanent;  that it is possible for human beings to love, know and become identified with that Ground;  that achieving this unitive knowledge and realizing this supreme identity is the final end and purpose of human existence;  and finally, that there is a Law (or Dharma) which must be obeyed, a Tao or Way which must be followed, if humans are to achieve their final end.

If all this seems a bit heady and difficult to associate with your daily reality, be assured that it is. In fact there is another whole school of thought propounding the idea that religions—all of them—came into being for the purpose of controlling people. On the observational facts at hand, this viewpoint is not easily refuted.

People have pondered, talked and written about human “purpose” for as long as written history has been around—roughly five to six thousand years—and, human nature being what it is, no doubt did the same long before anyone invented writing. Interestingly, here in the early twenty-first century we as a species don’t know a whit more than did our ancestors ten thousand years ago—or fifty thousand for that matter. We. Don’t. Know.

This hasn’t stopped a majority of our species from thinking they know quite a lot about human purpose—nor from so disagreeing with others who hold different ideas about purpose that the disagreement not infrequently proceeds to homicide. But we can trust this certainty:  Where two or more differing opinions exist, they obviously cannot both be right. They can both be wrong;  or they can both be partly right and partly wrong. Conceivably, one could be completely right and the other wrong or only partly right, though this option is unlikely in the extreme. How then should we view human purpose? What are we humans here for, and what should we all be doing? How can we find out?

Let us experience for ourselves a “thought experiment”—the method used by that great thought-master Albert Einstein when he was in the early stages of working out his great discoveries that came to be called “relativity.” We’ll work our way down to the experiment after a few paragraphs to properly introduce our subject.

As is now widely acknowledged by modern science, the scientifically unconventional way of thinking that Einstein used to pursue the questions raised by his insistent curiosity produced the most drastic changes in world history of humanity’s understanding about the nature of reality. Ignoring every precept of scientific method, he didn’t observe anything, he didn’t measure anything, he didn’t count anything. He merely sat in silent contemplation—thinking—allowing his imagination full free rein. And the place where the original thoughts produced by his broad-ranging imagination led him was a brand new conception of what is truly real in this universe we live in.

What constitutes “reality” was transformed—or, better said: our collective understanding of reality was raised. Einstein’s relativity introduced concepts so new and radically different from all ideas preceding them that they completely overlaid the fine-tuned universe so laboriously figured out by the good minds of Kepler and Newton over many years of mathematical computations. Their ideas, in turn, had thoroughly refined the “new” heliocentric solar system discovered by Copernicus and Galileo—which, in turn, overturned forever the long-revered wheels-within-wheels geocentric universe conceived by Ptolemy, that great deep thinker of two thousand years ago. Out with the old.

Einstein’s new ideas differed from his predecessors’ in one major respect. Whereas they had all placed the moving planets within an evolving but definable geometry, he said it’s all relative—planets don’t circle the sun controlled by gravity, they “fall toward” the sun. They so fall because the sun’s great mass and density deforms the space around it, creating a “well” into which all the planets would quickly fall if the centrifugal outward-slinging of their momentum didn’t keep them in their orbits. The popular analogy to help us visualize this is a bowling ball lying on a mattress, creating a depression into which an encircling marble will gradually descend as friction slows its orbital momentum.

In another respect, however, Einstein was very much like his predecessors—they had all felt unrequited curiosity about unexplained mysteries. Since most ancient times, everybody alive had been able to look up and see the obvious—there is a large bright sun, and a somewhat larger but paler moon, and tiny dot-like stars, and they all clearly move about from place to place in the sky. They appear in different places depending on the time of day and time of the year. Why do they do that? All those human observers had wondered about what they saw, but only the curious few who actively sought greater understanding paused to really think about it—to imagine about it.

Those few produced a fuller truth, each a bit closer to the whole truth, in their turn over millennia—a few inquisitive minds perplexed enough about the obvious mystery of the celestial motions to think about them, explore the mystery. Each in turn applied their different ways of thinking in their approaches to the task. Einstein’s way—the thought experiment—was arguably the most different of them all. In our own time we observe great mysteries—such as definitions of energy, of consciousness, where the big bang came from, what is human purpose—but a bare handful of inquisitive minds pursue understanding of these matters.

To conduct a thought experiment, one simply thinks, using imagination to conjure how things might be. But such imaginings are always grounded in realities already known. One’s thinking builds on things observed and widely thought to be true, but not with such certainty that one closes off the possibility that what was thought true might be wrong—one can easily imagine some new perspective that might make the old truths untrue. And so we all think (or so we think) on a daily basis. But a thought experiment is thinking on steroids. It unhesitatingly engages imagination, and is very, very persistent.