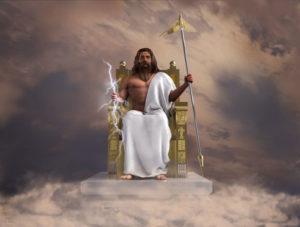 A rational image of God

It has been said, or claimed, or alleged, that human beings are “in the image of God.” If there actually is a creator-entity of some kind behind this whole business of existence, we cannot know what that entity is like—can we? What can “the image of God” mean?

On the sixth day, according to Genesis 1:26-27, God said:  “Let us make man in our image, after our likeness. … So God created man in his own image, in the image of God he created him; male and female he created them.”

Western civilization has long placed significance on these words. The “image/likeness” idea is repeated four times in quick succession, in slightly variant words, therefore—given the writing style of those ancient polemicists—it must be important. Since the facts “male and female he created them” are presented last (the female dead last), as if two genders were a minor afterthought, the major emphasis here is clearly on God’s image.

Consider that. A literalist interpretation must assume that, because humans have faces, “after our likeness” means that God too has a face, complete with eyes, nose, mouth, chin—probably long hair and a beard, both probably gray since wisdom (assumed) is associated with age (also assumed). Most likely a body, all pretty much the same, perhaps with minor modifications for human genders since God—He—is unquestionably male. Some ancient mythical God-creators were undeniably female, but these will be ignored as females were decidedly secondary in the Judeo-Christian tradition emphasized here.

However, the words don’t actually say that “in his own image” means the way God looks. They could just as well mean the way God “is”—and nobody can prove that’s not what they really mean. A very slight conceptual re-interpretation could take “image of God” to mean “personality attributes which God possesses,” rather than the way God “looks.”

Thus, since humans display emotional attributes—joy, love, remorse, temper tantrums and so on—we can reason that God presumably has these emotional attributes too. In fact the Bible speaks often of God’s anger as well as His love—not to mention his (allegedly) own self description “I am a jealous God”—so this may reasonably be regarded as a way in which God made humans “in his own image” of himself, i.e., to feel and display emotions. This brushes the matter with whole new meanings and possibilities.

“God’s image” based on attributes can also include “intellect,” i.e., the ability to think with reason and logic—in other words, to use the God-given power of one’s mind (which is only potential power if one does not use it well). Humans do indeed use reason and logic—sometimes; occasionally—so that too must be in God’s image. I rather like this one. “The image of God” is like God’s thinking, how He is thought to use His very thinking in such creative ways, how we too could creatively use our gift of this inborn God-like image—the ability to think—if we but would. But our schools do not teach How to Think as a subject, and so qualitative thinking techniques are learned accidentally if they are learned at all. Proclamation that no child will be left behind notwithstanding, they (and we) are all quite behind their limitless potential as children of God.

Reasoning forward from intellect, yet another image of God might refer to God’s essence, which undeniably is “spiritual”—meaning God is unquestionably non-material, or perhaps supra-material. This concept—which is quite perfectly as valid as the other concepts—can mean that humanity, by being “in the image of God,” is of the same spiritual nature as is God himself.  In this sense, “spiritual” must mean that humans consist of a God-like spiritual essence or aspect—shall we call it “soul?,” or perhaps “spirit?”—which is more immaterial than the material bodies we live in, and is more than the material ways in which we experience reality and interact with the apparently material world. I like this one too, and will address it more fully later.

How many are the valid meanings of “the image of God?” Jordan Wessling and Joshua Rasmussen, writing in the scholarly journal Theology and Science, reason similarly that “…it may very well be that the Supreme Being experiences a range of attitudes through a creation endowed with random processes. Perhaps God could be said to experience curiosity, anticipation, surprise and appreciation over a creation in which random processes are present.”

And why not? If we accept the notion that “in the image of God” must mean that we humans are in one or more ways “like” God, then we have already accepted the obverse:  that God is in one or more ways “like us.” A + B = B + A. Thus we have only to examine our own attributes to discover a least some of God’s attributes—not all, certainly (how do you make a big bang?), but undeniably “some.” Source words in the Judeo-Christian Bible—authoritative for a great many people—are very clear on this matter of “image” and “likeness.”

We all know how it feels to experience curiosity, anticipation, surprise, appreciation. Assuming God too feels these attributes, we might reasonably surmise that curiosity and anticipation motivated God to invent the big bang, and that God’s observations of the way things have unfolded since the bang enable God to feel surprise and appreciation. Or perhaps disappointment under the reigns of Hitler, Stalin, Pol Pot, Genghis Khan, Attila, Mao, Congress…  How very human-like of God to feel the same disgust we mortals feel.

It might even be true. After all, preachers in their pulpits proclaim all the time how certainly they “know” what God is like and what God wants of you, you sinner, very much the same way so many scientists in their learned writings proclaim how certainly they “know” that God is a myth. In hard fact, neither of them “knows” anything at all about the almighty concept we call God. When it comes to thinking about what may be meant by “the image of God,” our speculations are just as good as their speculations from science and the pulpit. Maybe better, if our mindsets are more open than theirs.

Bodily appearance. Emotions. Intellect. Immaterial spiritual essence. Attitudes. Feelings. Obviously there’s a lot of potential packed in that brief little verse about “God’s image and likeness.” How much like God, do you think, are we purported children of God, really? My guess is that, at least, God has loftier thoughts and is much better behaved.

Let me bring all this down to practical terms. By the image-of-God reasoning presented here, you are well within your human rights, not to mention common sense, if you should decide to eschew all denominational church-generated doctrines and dogmas in favor of thinking the matter through so completely that you end up creating your own personal theology.

You wouldn’t be the first. You’d just be one among the many who have followed this very challenging path, including a famous carpenter from Galilee, a desert tribesman born in Mecca, and an over-devout Hindu who eventually became known as The Buddha—along with thousands of others less well known. But be careful—none of the three would recognize the bizarre twists people would subsequently hang onto to their original ideas.