Chapter 2.  Energy Mysteries for the Thoughtful 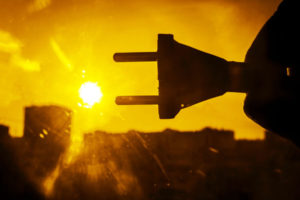 We know many things that can’t be seen are real even though we can’t see them.

A short while ago, a mere century or two in terms of scientific discovery, we came to realize there are unseeably tiny things called germs. More recently we discovered another unseeable called a virus, an apparently semi-alive thingy clear down at the molecular level—as much smaller than a germ as the germ is smaller than us. The new discoveries revolutionized medical care for bacteria- and virus-caused illnesses that had mystified humanity for all time before. There are good reasons to suspect that everything we think we know about bacteria and viruses is much less than is yet to be learned, for new discoveries about them keep appearing in science journals every month.

Our near ancestors living just before 1900 had no inkling that the atmosphere around us is brimming with energetic electromagnetic waves which we do not see, hear or feel. Except for a handful of scientific explorers, such unseen and unseeable forces did not exist in the wildest fancies of humankind since our origin three hundred thousand years before. Then the twentieth century brought new understandings that in quick succession produced useful applications of unseen energy waves that we called X-rays, radio, rader, television and microwave ovens. In the twenty-first, information technologies, waxing unchecked to running wild, seem poised to change the very nature of humanity itself—unless something big enough to upset our high-tech applecart should come along…

Over a mere dozen decades we learned how to manipulate a mysterious something called the electromagnetic spectrum into a host of bandwidths, which has in turn led to the present cacophony of wireless applications constantly zinging between tall relay towers, satellites, and myriad computers, smart phones and wireless devices uncountable.

The existence of these unseeable forces of nature – invisible and unknowable to our five senses – has finally become obvious to all of us because people everywhere can see and hold in their hands the ubiquitous techno-devices that reveal its reality. A few people, familiar with the use of oscilloscopes to view energy waves on a screen, may think they “know what the electromagnetic spectrum really is.” But they don’t. Ask any such person to explain to you:  What is energy?

I recall standing in the doorway of a high school physics classroom so long ago, and asking the physics teacher, in sincere teenage naivete, “But what is electricity?”

He answered: “It is applied energy, a force.”

But doesn’t that just move the question back to “What is a force?”

“I already explained that in class – a force is the capacity to do work.”

“But calling it a capacity doesn’t explain what it ‘is’ the way I understand what an apple is.”

“A force,” he said with finality, “is any form of energy that has an effect between any two things.”

I sensed growing impatience at my persistent questioning about what it really is. He said I should just accept that electricity is a “force” and move on. I pondered that circular little exchange long afterward, finally concluding that my respected teacher did not himself know, much less could explain, what electric energy is as contrasted with what it does.

Many years later I would learn to my satisfaction that Albert Einstein, Neils Bohr and their eminent colleagues also didn’t know what energy is and were quite open about their perplexity. They theorized a’plenty, but all were quick to say “I don’t know.” Acclaimed physicist John Archibald Wheeler told of feeling less than satisfied with “the standard ‘field theory,’ which assigned ‘substance’ to electric and magnetic fields existing in space.” These pioneers and their learned successors, adept at figuring out what energy does, are candid in admitting they really don’t know what it is.

Learning that my small wonderings were shared by great minds did nothing to scratch the itch of deep curiosity – the mystery remained, and remains still today, unexplained. Extensive readings have brought the observation that philosophers, theologians, theologian-astrophysicists and others who think for a living, and whose mindsets are open to thinking about matters of (narrowly) religion and (more broadly) spirituality, often speak of God, gods and spirits in terms of “energy.” What a coincidence.

Adding what seems related coincidence, the most forward-reaching scientific evidence available assures us that the vacuum voids of the universe—that is, the “empty” spaces between the stars, between galaxies, between galaxy clusters and superclusters, between immense gaseous nebulae—contain colossal, unbelievable, amounts of invisible energy in every thimbleful of so-called empty space. And that’s not counting the E=mc2 energy resident in every molecule of matter that is visible. Rather the same way a panentheistic creator God is said to be omnipresent, energy is everywhere and every thing. It isn’t “in” everything, it “is” everything. Everything that exists in our whole universe is energy, even in those vast interstellar voids which appear to be…“nothing.”

Our very physical human bodies are awash in energy—in every nerve, right down to each and every living cell, especially the billions of special cells within the remarkable, thinking, human brain. Religious mystics speak familiarly of “energy,” as do psychics, ghost busters, charlatans, and virtually everyone else whose thoughts dare venture beyond the familiar material world into the unfamiliar realm of the immaterial, the nothing, the empty spaces between the matter-filled spaces that appear not-empty.

What do you think energy is?

There is a world of wonder and mystery in the most common objects cluttering the spaces in which we live our daily lives. How sad that we so rarely notice all the magic that surrounds us, that includes us. To discover and feel the mystery and wonder, it is necessary only to consider a new way of looking at and thinking about quite ordinary items—a shoe, a fingernail, a rock, the very ground beneath your feet. This chapter is interested in bona fide natural phenomena and circumstances of nature that science cannot explain, candidly acknowledges it cannot explain (often adding, with irrepressible hubris, “yet”), and openly acknowledges as “mysteries.” Examples abound everywhere in our daily lives, as well as the farthest reaches of space and time.

My personal favorite example is a big old dining table, a prominent feature in our home. To fit you properly into the spirit of this discussion, I ask that you now go sit (this is temporary) at the largest, most solid table available in the place where you find yourself this moment. If it is a massively solid tight-grained oak table, so much the better.

Now seated at the table, raise your hand a foot or so and, palm downward, let it fall onto the table with a good solid smack. There. Do it again, this time adding a little force: whap! …feels pretty solid, right? And there’s the wonder and the mystery, because…it isn’t. It is not the least bit solid. That tabletop before you doesn’t even have a real surface. It only seems that way to your senses of sight and touch. In reality (an important word), the tabletop you just smacked is made of atoms all tightly linked together with each other. And what are atoms made of?

Nothing. Nothing, at least, in the conventional sense with which we ordinary mortals perceive solid-object things in the world around us. To be honest, it’s not really “nothing,” it is “something.” That something is energy. But what is “energy?” Just as my teacher explained without explaining anything, it’s a “force”—it’s not “material,” not a “solid” thing in the way that a tree or a rock is solid. And yet energy clearly is “something”—as is quite clear to anyone who ever stuck a finger in a light socket.

To explore the wonder and mystery of this non-material something called energy, it helps to have a mental picture of the atoms of which the table is made.

An atom has basically two parts, a central nucleus and one or more electrons which “surround” the nucleus at some distance out—not altogether unlike the way our sun, the center of the solar system, is surrounded by several planets in orbit around it. This solar-system analogy is false, but nevertheless useful for our initial conceptualizing.

What occupies the space “in between” an atom’s nucleus and its outlying electron(s)?

Nothing. Empty space, and a lot of it relatively speaking. If you should take a baseball and lay it on your table, letting that small round orb represent the nucleus of an atom, how far would it be from the baseball out to the first electron? That electron would be found w-a-a-y over yonder, several blocks away. The space in between would be empty—except for the energy. And figuratively speaking, the electron would be vastly smaller than the nucleus, like the size difference between a baseball and a pea.

It would be, that is, if it were a little pea of a thing as we have conceptualized it to be. But it’s not actually like  that. It’s rather more like a wave. But it’s not actually a wave either. It’s more like, say, a sphere of energy surrounding the nucleus in a weird way that fills up the whole “space” from the nucleus out to its maximum distance two or three blocks away. Except that it isn’t really a sphere either, it’s something of…“a probability.” A bit of a point-like particle and a wave and all the above, all at once. The closer you try to say what it is, the more elusive it becomes. Really, the electron is…nothing. Sort of. If the atom happens to have two electrons, the second will be the same thing—or stuff—or situation—as just described for the first, only that much again farther out, maybe farther.

Look closer at the nucleus itself. Simple question:  What is it made of? Like the electron, the nucleus too is made of energy—that and that alone. The same energy-stuff (whatever that is) that is humming along right now in the electric circuits inside your wall outlets and light sockets you should keep your fingers out of.

Imagine a very sharp knife splitting the baseball-nucleus in half. The nucleus has two categorical parts: 1) one or more protons and 2) one or more neutrons. And what are they made of? Why, they’re both made of much, much tinier thingies famously called “quarks.” And what are quarks like?

Well, they come in a half dozen varieties (the varieties are called flavors) called up and down, strange and charm, top and bottom. I’m not kidding—real scientists named these things, but they’re all quarks. Nobody has ever seen a quark and nobody ever will because they’re far too little. But we know they exist, science assures us, because the mathematics and controlled experiments prove it, leaving no possible doubt whatsoever that quarks have to exist. Actually we don’t “know” this, we infer it, but science happily accepts inference all the time. In fact, after many years of imagining, assuming, inferring, reasoning and deducing, the  discovery of quarks produced several Nobel Prizes. Curiosity compels that we ask:  What are the six flavors of quarks made of?

Energy. Energy…aka nothing. That and that alone. More wonder – more mystery.

So we have established that all three components of an atom—that is to say, every atom in existence throughout the wide universe, the atoms of which everything in the universe is made (galaxies, planets, trees, people, bugs)—are made of energy. The electron(s), and the quarks comprising both parts of the nucleus, are all made of energy—something you can’t see—and nothing more. That is the reality, regardless how different it may seem from the apparent realities we parade through in our ordinary daily lives, regardless how solid your table seems to be.