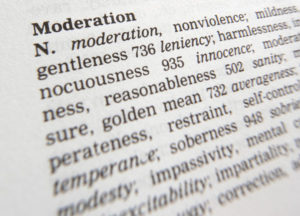 Half-way right:  Between the yardstick’s extreme right end and its middle, is a hybrid economic-political model we might call “moderated capitalism” if we had ever bothered to give it a name. Under this model the government operates most of its own bureaucracy but contracts out certain governmental responsibilities—especially military functions—to large private corporations such as, to list a few modern examples, Lockheed Martin, Boeing, Northrop Grumman, General Dynamics, Raytheon, Halliburton and Blackwater.

Moderated capitalism places modest, always insufficient, controls on monopolies and too-big-to-fail corporations which continue to grow still bigger. It assures a partial social safety net to “quite a few” of the poorest people, but never anywhere near all the poor. Personal income taxes as a percentage of income are kept low, and corporate taxes even lower, in order to ensure insufficiencies in the social safety net. This half-right model idealizes competitive free enterprise to the level of sanctification. It purports to revere a theoretical equality of opportunity which it never achieves and largely ignores. And it values the symbols of nationalism higher than the real people who constitute the nation.

Moderated capitalism is pretty much what we have in contemporary America where a huge percentage of the poor, with no realistic prospect of ever rising out of poverty, live a continuously impoverished lifestyle, except where surviving programs of the Roosevelt New Deal and Johnson Great Society still manage to mitigate some of their relentless economic hardship in some—usually declining—measure. Such moral programs are under constant attack from capitalism’s cheer leaders, both extreme and moderated.

Half-way left:  Between the yardstick’s extreme left end and its middle, is a hybrid economic-political model called “socialism” which might also be called “cleaned-up communism.” In this model the government owns and controls its own bureaucracy plus some of the really big private stuff, like monopolies and too-big-to-fail corporations.

Under socialism, government assures major economic basics (such as those economic rights laid out above) to all the people, and leaves all the rest to free enterprise. Taxes take up to as much as half of personal income, and turn it into guaranteed social services such as health care, education and pensions that are scot free to every citizen, leaving the other half of income available to buy food, clothing, shelter and recreation to at least a level of adequacy. Thereby, everyone is assured sufficient income that no one will go hungry, homeless or poor, and if you can manage to earn enough extra income to get just a bit rich, go for it. This hybrid is popular in Western European countries where “democratic socialism” is considered normal. In the United States, however, except for democratic socialist Bernie Sanders, most citizens are so indoctrinated they simply don’t comprehend the significant and important differences between socialism and communism. Many use the two terms synonymously because they don’t know any better.

The American antipathy to socialism has everything to do with the unknowing confusion of socialism with communism. Socialism is a pragmatically fair, humane and mostly successful strategy by which many democratic countries have ameliorated the excesses of the capitalist system and as a result stemmed the potential for revolutions and civil wars.

The gulf between communism and socialism is the gulf between Marx’s failed revolutionary fantasy and the wisdom of his suggested reforms. Thanks to President Franklin Delano Roosevelt, even the United States institutionalized some of Marx’s ideas, in the wake of the Great Depression of 1929, which Marxists believed was the death knell of capitalism—but it was not. By overhauling the banking system, enhancing the graduated income tax, and introducing social security, unemployment insurance, maximum working hours, minimum wages, and a plethora of other measures to benefit working people and strengthen their bargaining power, Roosevelt saved capitalism.

The middle section of the yardstick—that broad section between (and including) socialism on the left and moderated capitalism on the right—encompasses most countries in continental Europe plus Great Britain and Ireland, Canada, Australia, New Zealand, South Africa—and in many respects the United States, though here it is degrading.

At the present time in history the tuggers-to-the-right are winning this tug of war in the United States, and are somewhat less successful in other Western democracies. Primary indicators of their slow but accelerating ascendancy include:  1) unchecked growth of powerful corporations into multinational mega-corporations which command levels of wealth and power exceeding that of many whole nations and are uncontrollable by any one nation;  2) increasing inequality in distribution of wealth, in every nation worldwide, between an extremely wealthy few and everybody else;  3) successful strategic use of voter distractions, such as equating abortion with religious sin, for the practical purpose of concealing their economic machinations;  and 4) slow but steady shrinkage of the middle class while the poor population grows ever larger and more impoverished.

These indicators are particularly evident in the United States. They developed as slow trends over the course of the four decades after 1980, and so are not especially noticed by those most affected—the young, and people up to age fifty. The people most alarmed by this overall trend—because they recognize it as detrimental to the better interests of the American people as a whole—tend to be older Americans with long memories and a relatively few others who happen to pay attention to long-range social statistics. The alarm, however, is gaining more traction these days.

People who don’t know much about yardsticks invariably confuse economics and politics. How often, for example, do you hear someone blandly mouth the phrase “communism versus democracy”—fully unaware they’re mouthing apples and oranges? These high thinkers consummately do not know the former is an economic term, the latter political. The facts aren’t hard to remember, though rarely are they taught in school:

Economic capitalism can be either politically democratic or politically tyrannous. In the United States the trend since 1980 has been downhill toward a tyrannous form of extreme capitalism that is dividing and impoverishing the nation’s people. Economic communism likewise could be either politically democratic or tyrannous, though—on the record—tyranny has reigned everywhere communism has ever been tried. That’s probably because the “total sharing” it calls for is more alien to human nature than the selfish greed that so successfully drives capitalism. Perhaps that says something about human nature—or maybe about half the human natures—but I wouldn’t want to conjecture on that.

“Communism versus democracy” is now irrelevant worldwide, because almost every country has switched to the capitalist economic model since the ignominious fall of the communist Soviet Union. The successor government of Russia runs its version of capitalism with a semi-totalitarian model that contrasts sharply with more democratic western nations. China, another anomaly, governs the world’s fastest growing capitalist economy with an anachronistic still-in-control authoritarian communist party that so far has successfully used dictatorial decrees to compel things to go as the party desires. And of course there’s dreary North Korea, still propping up its obsolete dysfunctional communist economy with history’s most bizarre tyranny, which cannot be ignored because its petulant silly toddlers have nuclear weapons in their toy box and threaten belligerently, with great frequency, to use them against all parental critics who try to tell them No no, you must be nice, say please and thank you, feed your hungry people…

It is historical fact that communism has been almost exclusively tyrannous, probably because its incentives are so unnatural. Capitalism historically has been, by and large, more democratic than tyrannous, though it too has displayed more than a little tyranny along the way. Doubters should examine the history of corporations’ bloody suppression of America’s infant labor movement in the nineteenth and early twentieth centuries.

It also is fact that at no time in history has economic capitalism coexisted with anything remotely close to the political democratic potential that should accompany it. This remains true today because economic capitalism’s design, its functioning, its very DNA, is inherently undemocratic. It is inherent that corporations—the delivery instruments of capitalism—must grow too large to be feasibly regulated in the public interest;  they must seek to out-compete and eliminate their competitors and become monopolistic;  they must take unfair advantage of their customers, and underpay their own employees. Like hogs rooting as hogs must, that’s what corporations do. And if you think that’s pretty bad, communism’s record lacks even the potential to foster democracy. What a pair.

Be reminded, communism and capitalism are the extremes, not the broad middle ground from socialism to moderated capitalism. Extremes of any kind tend to foster extreme ideologies. An “ideology” may be thought of as an ideal without any compassion, and a prime characteristic of ideologies is that they’re often dead wrong but they prevail for decades causing much misery and trouble where there was no trouble. And naturally so:  they typically represent muddled extremist thinking—closed mindsets. It is an economic ideology, roughly half a century old and now known as supply-side economics, that is causing so much of our current troubles in America—stagnant personal wages, extreme wealth inequality, political gridlock, and willfully blind social divisiveness.

There were no such troubles—at least none strong enough to degrade the overall prosperity—from 1946 to 1979, the historical record of which is crystal clear:

When we the people through our government 1) placed many strong public-interest regulations on corporations, especially those that produced nothing but financial manipulations, and 2) imposed steeply graduated income taxes that took little from the poor and quite a lot from the very rich, and 3) took a strong governmental lead in guiding basic research and initiating innovative new business activities,  the resulting unassailable fact is that 4) the middle class was large, well off and growing, 5) the poor were far less poor and were a much lower percentage than now, and 6) Great Gatsbys were exceptions who mattered little.

There was little of this gaping income inequality that increasingly now sets the super-rich so far apart from the rest of us, fostering visceral deep resentment and the same seeds of revolution that haunted our Great Depression years—until the New Deal’s strong governmental initiatives restored our living incomes and saved our collective social butts.