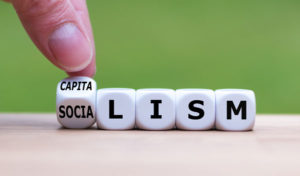 The system is capitalism. Its vehicle is the corporation. All this terrible risk from inadequately stewarding the corporate tool we have inherited would simply vanish if we were to put an end to inherently autocratic corporations, and replace them with a different form of daily commerce that is inherently democratic, free, fair and just—and which, by its very nature, cannot be any other way.  We might call it, say, “democratized capitalism.”  Let us just consider all the ways we can think of for eliminating—bringing to an end—the corporation and its nefarious role in American history. Three rules apply:

Ideas most certainly will follow, but let’s first deal with that matter of not understanding the differences between communism, socialism and capitalism. This wrong needs righting. We can’t even focus on our economic problems, much less fix them, without rudimentary understanding of economic models. Such understanding has been mostly absent in the United States through my lifetime—a victim, I suppose, of corporate America’s mortal antipathy to the Russian revolution, which antipathy has been trickled down to the U.S. population so thoroughly that most people don’t know there are any other alternatives to capitalism. But oh yes indeed, there are several good options.

One of them arose in 2015 when presidential candidate Bernie Sanders confronted U.S. citizens with the unfamiliar idea of “democratic socialism.” Knowing nothing of economic models, most Americans didn’t know it was possible for socialism to be “done” democratically. Even though lots of people find Bernie totally likeable as a feisty oldster who consistently condemns popular wrongs such as poverty-level wages and too-big corporations, I see little evidence this un-education has improved. Let it begin here.

The economic continuum  (or the endless confusion of apples and oranges)

There is in the United States a grievous ignorance of economics and politics, such that people constantly confuse the two, failing to distinguish between them if they pause to think about them at all. They mush them together like potatoes and gravy. Most don’t realize how important this confusion is, or the consequences of it. This ignorance is placing at great risk the future of the USA, and especially the ideals our nation represents—the greatest governance ideals in the history of the world.

Imagine a yardstick. Three feet long, cheap wood. Like all yardsticks it has two sides. On this unique yardstick, the front side is economics. Turn it over—the back side is politics.

They always go together, these two human institutions, they are opposite sides of the same…yardstick. Here is a fact:  you will never find one without the other. They are inseparable, economics and politics. The one involves human needs, i.e., the things we must have just to eat and stay alive. The other involves how we behave in obtaining those needs, i.e., a constant study in human behavior—predominantly bad, some would say.

Economics is of course the “needs” side of the yardstick. It‘s a simple thing really, though economists have done their level best to obscure the simplicity and make economics incomprehensible to the ordinary people who bring it alive, which is all the rest of us. Simply stated, economics concerns what you need to stay alive—and, while you’re at it, to live life as meaningfully as possible. It ain’t rocket science, as they say.

Thus:  to merely stay alive you need the basic essentials:  food, clothing and shelter for starters, each in adequate measure respectively. Beyond these bare necessities, and in order to enjoy at least the potential for a meaningful life, you also need a few complementary essentials like transportation, health care, and insurance—particularly auto insurance the state makes you buy regardless whether you can afford it, rich or poor. Please note though, the state requires this in service to the public interest. You also must have “health care,” both prevention and curative treatment, as well as a dab of recreation and entertainment to support your mental health. You need these things all your life, including after you’ve retired from working. During young adult years you also need some savings or the price of higher education, though not both at the same time.

These human economic needs can be well understood as a hierarchy of needs, and a gent named Abraham Maslow gave us a good model for understanding them. Maslow’s hierarchy has five levels, stacked atop each other and shaped like a pyramid. The two bottom levels include all our basic economic needs as just cited above. In contrast, the top three levels address life’s other needs. These go beyond the merely economic, and include things such as loving and being loved, self esteem, and—at the very top—the really good stuff such as being creative and feeling that life is just really fun and I’m so glad to be living it!

Great blessings attend people who attain the top three levels, but there’s really no choice on those bottom two levels, you’ve got to have them in order to stay alive. Yet many Americans do not have them adequately—they barely manage to stay alive—hard working, malnourished, often miserable, yearning for such small joys as can be found. This in the world’s richest nation is worse than a disgrace, it is immoral. So are you and I helping to cause it? Or perpetuate it? Or failing to help stop it, and fix it? Exactly who is responsible to make life more fair for everybody, if not you and I?

Coming back down for the present economic discussion, our only concern here is with Maslow’s bottom two levels where you find food, clothing and shelter—the necessities of merely staying alive, plus a few niceties to make life worth living such as health care, retirement income, transportation, maybe auto, life and flood insurance—and suchlike. Not an excess of any of these, not rich, but not poor either—adequate. Adequate.

So that’s one side of the yardstick, “economic needs.” These are sometimes called economic “rights.” This term—economic rights—is controversial among people who 1) lack empathy or 2) are quite wealthy. The idea of economic “rights” is better understood and appreciated by anyone who ever experienced being poor, struggling to pay the bills.

The other side of the yardstick is politics, i.e., how we behave in meeting our economic needs. It’s also fairly simple, though it may not seem that way when you’re reading the newspaper. In meeting their needs, people follow two basic modes of political behavior:

Straight from The Godly Algorithm, your political choices, always, are to help others or serve yourself. I might mention these are also moral choices, but never mind that. These two potential modes of behavior stand in stark opposition. We choose between them in every hour of every day of our lives. This basic choice never goes away—it comes up constantly. Of course a third-option idea applies here too:  nobody chooses all one way or the other all the time. We all serve our own economic needs to some extent, as we must—and in some measure, some of the time, most of us also help at least some others meet some of their needs. Do you know anybody who’s totally at one end all the time?

But what, in each of us, is the ratio? It’s never fifty-fifty. What is your personal political divide between serving yourself and helping others? Forty-sixty? Or sixty-forty? Maybe even ninety-ten? Obviously you can’t help others very well unless you’ve first served yourself sufficiently to become financially, intellectually, emotionally stable and able to help others. But as to meeting your own economic needs, how much is enough? How many people do you know who settle for “mere” adequacy? There are some, you know.

More to the point, why—at our economic extremes—do dire poverty and gross excess of wealth exist side by side in the USA? Why are there Americans at the economic bottom who can barely afford even the basic three of those economic life needs while Americans at the top buy whatever their whimsy wants, unconcerned with price?

If you want an indelible lesson in how the political choice to 1) help others or 2) serve self plays out, sit in on a few sessions of Congress. The flurry around all those purely economic questions is called politics, though it could be called alternatives to moral behavior. This is not to say that politicians, like the rest of us, don’t also spend some time arguing over “apparently” non-economic matters, such as foreign non-policy or how voting districts will be gerrymandered. But the real goings-on, ever and always, are behind-the-scenes machinations of those who use politics (i.e., political behavior) to influence economics—all too often to serve self and Get More Money.

At the foundation of things, most politics is a tension over how the “common wealth” we mutually generate will be distributed—i.e., who will get how much of the economic pie. That and that only, no matter what else they may allege to be talking about, is politics.

Economics and politics are two sides of the same yardstick. Everyone needs to understand this—though sadly most don’t, for reasons that are about to be explained.