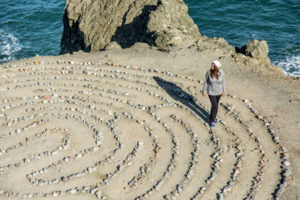 In this manner, our thinking, imagining, reasoning minds (i.e., consciousnesses, spirits, souls, etc.), exploring the hypothesis that brain generates consciousness, lead us with ineluctable logic to a reasoned conclusion that consciousness is ubiquitous, that throughout the universe every wisp of creation is conscious.  Our failing to recognize it doesn’t mean it isn’t so.  Corollary to this thought, it follows that the thinking human self—whatever “self” really is—inherently must be one with everything else, integral parts with the whole unity that includes my consciousness, your consciousness, and everybody else’s consciousness.  I am somehow psychically a part of you, as you are a part of me.  All one, all parts of a greater unified whole—and it all sounds very like the message from a deep NDE.

How does all this square with the rigors of that broader understanding of science that is not hopelessly reductionist?  It is widely observed that consciousness is, without doubt—evidently, apparently—associated with the brain.  Our thought experiment began by interpreting this apparent “association” to mean that the brain is the generative “cause” of the consciousness.  We now clearly see that this is just an assumption, notwithstanding that in some minds it has hardened into opinion if not indeed church-like dogma.  In any case, using rationally imaginative thinking, we have formulated a directly contrary hypothesis—i.e., that consciousness exists apart from the brain, and is to be found in every nook, molecule and particle of the vast universe.

So what does this imply? That the very concept of consciousness is indistinguishable from God, therefore God exists in everything, or, said the other way around, Everything Is God?

We are not the first to think ourselves to such a point as this. Distinguished NDE researcher Pim van Lommel, M.D., reasons a scenario in which the universe contains an over-arching consciousness that the brain taps into as a receiver, much as radios and TVs tap into radio and TV waves that are “out there.”  Reaching deep into the uncertain quantum physics of pioneers Neils Bohr, Erwin Schrodinger and Werner Heisenberg, van Lommel reasonably hypothesizes consciousness residing in phase space, the “invisible, non-local, higher-dimensional space consisting of fields of probability, where every past and future event is available as a possibility.”  He postulates that our whole and undivided consciousness with declarative memories finds its origin in, and is stored in, this quantum phase-space, and the cortex serves only as a relay station whereby our consciousness including our memories “are received into our waking awareness.  In this perspective, consciousness is not physically rooted.  This could also be compared with the internet, which does not originate from the computer itself, but is only received by it.” (Van Lommel, 2004)

Comparable hypotheses are reached by Ervin Laszlo, Ph.D., philosopher-scientist, integral theorist, Nobel nominee, author, and professor at major universities in Europe, the U.S. and Far East.  Laszlo maintains that the locus of our consciousness is the cosmic vacuum.  With solid scientific reasoning, astrophysicists describe this “vacuum,” existing throughout the universe, as an immensely powerful “zero-point energy field.”  Laszlo calls it the Akashic Field.  Like van Lommel, he regards the brain as a “receiver” that somehow (unknown) mediates the flow of conscious knowledge and memory between the cosmic vacuum and ourselves.  Calling the universe a quasi-living, coherent whole wherein all things are connected, Laszlo describes a sense of belonging, of oneness in which we are part of each other and of nature, at home in the cosmos. (Laszlo, 2004, 2006)  This also sounds very NDE-like.

The eminent philosopher-priest Teilhard de Chardin was another who thoroughly walked this ground before we arrived.  Julian Huxley, in poignant introduction to Teilhard’s last book, The Phenomenon of Man, provides thoughts of exceeding relevance to our topic.  The “complexification” he mentions in the following paraphrase was Teilhard’s equivalent meaning for what is now called “emergence”:

Pere Teilhard also maintains that complexification by convergent integration leads to the intensification of mental subjective activity—in other words to the evolution of progressively more conscious mind. Thus…full consciousness (as seen in Man) is to be defined as “the specific effect of organic complexity. But comparative study makes it clear that higher animals have minds of a sort… [E]volutionary fact and logic demand that our minds should have evolved gradually as well as bodies, and that accordingly mind-like properties must be present throughout the universe… [W]e must infer the presence of mind in all material systems, by backward extrapolation from the human phase to the biological, and from the biological to the organic. [W]e must envisage the intensification of mind, the raising of mental potential, as being the necessary consequence of complexification, operating by the convergent integration of increasingly complex units of organization. … The brain alone is not responsible for mind, even though it is a necessary organ for its manifestation.”

While the example just presented doesn’t precisely equate with the thought experiments of Newton and Einstein, it should be clear that such experimentation has no limits.  There is more to learn, for example, by exploring in a second thought experiment the opposite of our first example – i.e., by thinking to comparable hypothesis from a starting assumption that consciousness does exist apart from the brain, and that the brain merely acts as an intermediary receiver.  Where might that lead?

Or perhaps skeptics and believers are both right, and simply lack sufficiently broad conceptual context for their seemingly discrepant views.  Theologian Douglas Trotter proposed a method for gaining insight through a “theory of correspondence” between the realm of direct intuitive knowing, where he felt spiritual awareness lies, and the physical world, where knowledge is acquired primarily via the methods of empirical science.  Empiricism holds that experience, particularly of the senses, is the only source of knowledge.  Trotter maintained that experience must also be the starting point in spirituality, just as it is in science.

That seems significant, because experience is the E in NDE and there is no era of human history from which we do not receive reports of such experience.  Building on the empirical evidence represented by the large modern database of NDE reports, one could in a third thought experiment explore the possibility that brain and conscious mind, though ultimately separate entities, inseparably “correspond” so long as the brain lives—which is, after all, indicated by present evidence.  Neurologists watching fMRI readings while they probe and tamper with living brain regions—visual cortex, frontal lobes, whatever—are able to show convincingly that consciousness can be made to perceive false “experiences” resulting from material influences inside the material brain.  Clever hypothesizing about this brain-mind association, indissoluble so long as the brain lives, might produce a conceptual context so vastly broader than skeptics or believers have yet considered that they could find themselves sliding into unwelcome agreement.

Or—a fourth thought experiment—one might try a rather different avenue based on the fact that NDEs inherently suggest alternative realities.  One semi-orphaned corner of contemporary physics has for three decades been dominated by string theory.  Where Einstein’s contributions dealt uniquely with four familiar dimensions, string theory routinely posits eleven.  Some versions go up to twenty-six.  Not unlike NDE researchers, string theorists are driven by compelling urge to understand (imagine) nature as a coherent whole in which all things are connected, so that they may establish a (hypothesized) Grand Unified Theory of Everything (literally, to unify quantum physics with gravity).

They arrive at these unusual dimensionalities using high-order mathematics incomprehensible to most of us.  So, to make things easier, let us imagine that the non-physical reality discerned by near-death experiencers is really just stepping into an invisible fifth dimension that is, for some (unknown) reason, not perceivable by the five familiar senses our physical bodies exhibit.  It’s there but, like atoms and the end of space, we cannot see, hear, smell, touch or taste it.

Except that sometimes we do.

Let your creative imagination soar.  Imagine that the non-material reality claimed by NDErs (sometimes called “heaven” by the conventionally religious) is not “up” or “out” there somewhere.  Speculate that it is right here, right now, all around us in some string theory fifth dimension but unseen and presumably not perceivable by our conventional five senses.  Then hypothesize how it happens that the living can step over into this other-dimensional reality only by dying—or, more temporarily, via NDEs and a plethora of categorically comparable phenomena known by centuries of poorly documented anecdotes on out-of-body experiences, incorporeal voices, visits and communications from the dead, spiritual mediumship, and so on.  There’s lots of evidence but it’s a database with such a flaky reputation that few genuinely scientific investigators are willing to touch it.  For what it’s worth, string theorists aren’t making much headway either.

Part 5 pending in one week