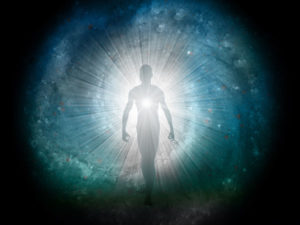 In fact there is.  “Thought experiments” are a less common, yet equally valid, scientific approach that combines the first two steps: observing and hypothesizing.  In some ways not unlike Plato’s ideal “forms,” this approach is especially useful where the phenomena one wishes to consider are literally not observable by human senses—e.g., phenomena such as distant quasi-stellar objects, the subatomic world, and, just possibly, the non-material realities so strongly indicated by NDEs.

Isaac Newton, en route to his theory of universal gravitation, used thought experimentation by imagining cannonballs fired at varying velocities from a cannon perched on a high mountain overlooking the earth’s curvature.  Two centuries later thought experiments were famously used by Albert Einstein to overturn millennia of accumulated scientific “belief.”  He could not experience acceleration in outer space, so he imagined being enclosed in a space elevator outside earth’s gravity well.  Unable to travel at the speed of light, he imagined what might happen if he could.  Human history was profoundly changed by these seminal thinkers’ creative use of their imaginations.  There is no reason to doubt it will happen again.

To say Einstein’s thought experiments “overturned” earlier scientific beliefs fails to convey a sufficient sense of the Einsteinian revolution’s incredible scope.  Perhaps a better term is “expand,” for each of the few truly giant leaps of knowledge throughout human history has built upon, and conceptually expanded, what went before.  For example, just as Copernicus overturned the Ptolemaic universe with his greatly expanded heliocentric concept, and Newton subsequently incorporated the best of his predecessors into greatly expanded concepts of celestial motion that remain highly useful today, Einstein incorporated all fundamental physical knowledge into new concepts so greatly expansive that now a century later we still are far from understanding all their implications.  And they came into being in Einstein’s mind as he sat quietly imagining his thought experiments.

No telescope, no visuals high in the ER—just thinking.

What is considered “normal,” “paranormal” or “supra-normal” changes over time—sometimes rather quickly.  Early in the twentieth century for example, after Edwin Hubble noticed a red shift in the spectra of starlight, astronomers deduced that this shift must mean the cosmos is expanding.  This brand new thinking made quite a stir at the time.  Shortly thereafter, applying rational inference, they imagined the scenario running backward—which led them to infer that the universe “must have” begun with a colossal explosion (Big Bang) of an infinitely tiny point.  That’s quite a stretch, this hard science version of Let There Be Light—until we realize that in the few decades since the Big Bang was first hypothesized a good deal of supporting evidence has indeed been found.  The theory is not “proved,” but so far it has been quite well upheld and it is now “accepted” virtually throughout the scientific community.

Interestingly, Big Bang theory poses a profound question for NDE research:  questions about the existence of time aside, does the non-material pre-Bang origin of that infinitely tiny proto-universe confront us with implications that are any more believable, any more rational, than the implications of other non-material phenomena—NDEs in particular?  On such implications, leading scientists today do not agree among themselves.  We may be confident that questions concerning consciousness and non-material realities indicated by NDEs remain wide open, notwithstanding any “certainty” claimed by anyone of any persuasion.

Thus encouraged, if we should attempt our own version of these grand methodological precedents, the NDE offers fertile ground.  Recalling the context surrounding major time-honored scientific breakthroughs in understanding reality, the very existence of the large collective body of NDE reports suggests we have again reached a frontier where there is need to expand our concepts.  Recall also that while standard scientific method has greatly helped to advance human knowledge, it was creative “different” thinking that produced some of history’s greatest advances in human understanding—notably the pivotal revolutions of Copernicus, Newton and Einstein.

Current approaches to NDE research, controversial and slow fruiting, seem unlikely to resolve in any foreseeable future those fascinating, deeply nagging questions of reality that are raised by near-death, out-of-body and similar inherently “non-normal” experiences.  While continuing this research, let’s try something else.  As prelude, let’s now experience a very simple example of the imaginative alternative methodology that turned out so well for some of history’s best thinkers.

“Consciousness” is the term we use to describe our normal, daily wakefulness, and it is thought to reside in our brains.  The absence (or altered form) of consciousness, mostly in the form known as sleep, characterizes about one third of our lives.  All this is taken for granted, even though profoundly central to an entire lifetime for each of us.  Why then is consciousness one of humanity’s least understood phenomena and greatest mysteries?  What is it?  Are we material bodies that just happen to create self-aware “consciousness” or are we something else?  That these profoundly fundamental questions have remained unanswered for millennia does not preclude fuller understanding within our lifetimes. Whether that understanding will more likely come from neurophysiologists or NDE researchers, however, remains to be seen.

Every person you will ever meet will have different (and probably shifting) ideas about consciousness and related terms such as mind, spirit, soul, ghost, angel, being, essence, and life.  Anyone doubting this may randomly ask several people their understandings of these terms and discover first hand the great variety of beliefs.  Dictionaries are little better.  Definitions of these terms are not sharply distinct – they blend into each other, they cross refer so much that some are essentially circular.  In daily utterance some are virtually synonyms (e.g., soul-spirit-ghost; consciousness-mind).  No definition for any one of these terms will be found that stands fully independently of at least some the others, in the way that “dog” and “mammal,” though related, have clearly distinct meanings.

Exploring the relationship between brain and consciousness thus is ever complicated by definitional ambiguity, an obfuscation which reappears at every stage of inquiry.  Can we, for example, conceive consciousness without life (or as other than “mortal” life between physical birth and death)?  Can there be life without consciousness?  Are we even justified in thinking we can in fact distinguish between the two terms?

In all reported NDEs, out-of-body experiences (OBEs) and other so-called paranormal phenomena, wakeful self awareness is a central claim – essentially as we experience it in conscious daily life.  With remarkable virtually one hundred percent consistency, NDE experiencers report that they “felt” fully consciousness, even while reliable witnesses observed the brain to be unconscious or even dead by every testable measure known to medical science.  Some report feeling “more than normally” conscious, and NDE reports in general suggest some kind of distinction—as yet undefined—between normal waking consciousness and a certain “vibrancy” of NDE consciousness that may reasonably be inferred from NDE accounts.

OBEs occurring during well-and-healthy “normal” consciousness—i.e., spiritually transformative experiences that include NDE-like features matching the Grayson scale (Grayson, 1983)—are stranger still, though relatively little addressed by serious research. Skeptics attribute all of these private perceptions to changeable material states in the physical brain—and thereby place themselves in disagreement with every person who has actually experienced an NDE.  The resulting question could hardly be clearer:  does consciousness exist only in the brain or is it independent of the brain?  Our sample thought experiment will explore these questions:  Is the brain a “generator” of internal consciousness or is it some kind of intermediating “receiver” of external consciousness?  If the latter, where externally might consciousness reside?

Part 3 pending in one week