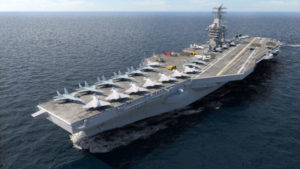 I would like to say a few words about our relations with other nations—what we usually call “foreign policy.” Many times over the years it has seemed as if we didn’t really have a clearcut policy on how we would interact with the other nations of the world. It has often seemed as if we were drifting along in a sea of ever-changing tensions, reacting to whatever situation arises as the crisis of the moment.

U.S. foreign policy is not an easy subject to sum up, but we should all be aware that there have always been, and always will be, two alternative approaches to our relations with other nations. One approach is based on principle, the other on pragmatism.

For example, if we always acted exclusively on principle, we would define right and wrong according to our values, and then judge the conduct of other nations accordingly. We would be friendly to nations that do right, and oppose nations that do wrong—as we define right and wrong. Now we’re all pretty sure we know right from wrong, but…  This simplistic approach would probably have us at war with somebody all the time, because no two people on earth agree on right and wrong in every situation—and it’s harder still to get whole nations to agree on anything. What’s “right” to one side may be an outrage to the other. This is the dilemma of foreign policy based on principle.

On the other hand, if pragmatism guided our foreign policy, we would find ourselves supporting some nations that unquestionably do wrong, which is unfair to those that do right—again, as we define wrong and right. For instance: if you have a dictator who is protecting Americans, against another dictator who is trying to harm Americans, which dictator are you more likely to tolerate? Both are dictators who rule as despots over their own citizens, but—as a practical matter—we cannot ignore the reality that one is helping us while the other is trying to harm us. This is the dilemma of pragmatic foreign policy.

In real life, our foreign policy is influenced by both principle and pragmatism. The United States slid down an awful slope into the Vietnam War based on the principle that communism must be opposed anywhere and everywhere, because it seemed to be taking over the world’s nations, one by one, and Vietnam was next. In principle, the domino theory seemed real, at the time. But today, as we look at the world in modern perspective, we see the domino theory as a principle that was simply misguided—and it led us astray.

But foreign policy based on principle isn’t always wrong either. For example, the principle of free elections is sacred to Americans. When any other nation tries to influence our elections, by misusing the internet or by any other means, you can safely bet there are going to be consequences which make that nation sorry they tried. Foreign nationals with ideas about interfering in our elections should be reminded of the principle in an old American saying we sometimes use, and we mean it:   Don’t tread on me.

I also have a pragmatic example. We got into World War II in 1941 because the people then ruling Germany and Japan openly intended to take over the world and subjugate every nation, including us. The threat to our freedom and survival was real—and our mighty response was an ultimate example of pragmatic foreign policy.

Historically, American foreign policy has sometimes been guided by pragmatism, sometimes by principle. It depends on each unique situation. This is unlikely to change during my Administration. Using the best advice I can get, I am always going to choose whatever course I believe is best for America and Americans. That is your President’s first responsibility.

In this context, let me now describe a few policies that are probably going to guide most of our dealings with other nations.

My fellow Americans, as we pull back from foreign sales of guns and military hardware, a dark form of foreign policy which often makes small problems get worse, let us apply the same medicine here at home. For years now the urge to make a profit by selling guns has brought carnage and heartbreak across America.

How many thousands of innocent schoolchildren and adults are dead today because we have allowed millions of guns to be sold across America? Each week brings new dread about which innocent school or happy public gathering will be the next scene of murder by some deranged fool who got his hands on a high-powered weapon that should never be used by anyone outside our trained military forces.

Here too, the tension is between principle and pragmatism. The argument from principle says:  We must defend the Constitution’s second amendment right for anyone to keep and bear arms, because that right is “so utterly important”—it is a holy right—no matter how many innocent lives are taken by lunatics bearing arms—the second amendment forever!

The pragmatic argument says this is nuts! We have something called a National Guard nowadays, so we don’t need citizen militias, armed to the teeth—ready to run out like Minutemen, and defend our villages against impending attack by Redcoats and Indians. In the horrible context of nearly weekly slaughter in our schools and public places, any urge to keep spreading guns and ammunition must be considered a mental sickness.

No more! In coming weeks I will send legislation to the Congress to do these things:

I ask both houses of Congress to pass these arms control measures on an emergency basis and send them quickly for my signature. I ask all state legislatures to ratify the second amendment replacement this year. I ask every American citizen to support these legislative measures, and to tell your elected officials of your support.