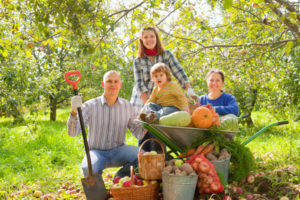 12. Farming and Environmental Health in the USA

Farming and environmental protection are not customarily discussed together, though I believe they should be. I am doing so now because the natural environment and the farms we depend on for food are two sides of the same coin, and they are deeply interrelated.

All those great open spaces between our cities and towns are filled with the farms, the forests and the open countryside that are so integrally a part of this nation’s magnificence.  As children we learn about beautiful spacious skies above our purple mountain majesties, and amber waves of grain across our fruited plains. Many people think America the Beautiful should have been our national anthem.

But it’s too late for that, because things have changed. Those sweet words—words that used to be so true—did not anticipate modern monoculture crops dependent on manmade fertilizers, and water we pump up from ancient aquifers faster than nature’s rains can replenish them. They don’t mention farm runoff of chemical pesticides, herbicides, fertilizer and massive animal wastes which nowadays so pollute our streams and rivers that the fish die, and the water is not safe for kids to swim in.

The song doesn’t mention our nationwide destruction of natural habitats, leaving fewer and fewer natural places where little birds and animals can survive, and sustain the rich biodiversity we ourselves are dependent on—whether we know it or not. And year by year, barely noticed by most people, the little birds and animals are disappearing. Every remaining patch of forest that gets cut down, every remaining wetland that gets drained, diminishes our national wealth and our survivability—whether we know it or not.

For well over half a century we have been severely challenged to clean up our water, our land, and the very air we breathe. We have allowed formerly clean natural resources to be polluted by the toxic wastes our industrial society dumps out at the end of every process, whether that process be farming or manufacturing. Simply finding some reasonable way to get rid of the gargantuan waste and garbage we now produce is itself a big problem.

We’ve had some successes, but we’ve also lost ground, and the cleanup still has a very long way to go. The pollutants remaining in our natural environment after all these years are more than just a national disgrace—they pose very real ongoing risks to the health and wellbeing of ourselves and our children. Sad to say, in much of the nation the risks are often highest for American citizens who live nearest the polluters, cannot afford to move, and are least able to protect themselves. Their protection depends on the rest of us.

Along with these wrongs, we’ve allowed circumstances to make it nearly impossible for young famers to follow their fathers into the vital tradition of growing our food supply. In how many occupations is it considered normal for a young person to face up front costs of several hundred thousand to a million dollars just to get started?

The outlandish costs of land and equipment needed to start farming today are causing more and more of our food production to pass from individuals to corporations or giant private farms. Many of these so-called family farms, though privately owned, involve thousands of acres that are run like a factory. Corporations control many smaller family farms through contracts that dictate what will be grown, when, and how.

The traditional American family farm—an independent entity of a hundred to a few hundred acres—has virtually passed from the American scene. In many ways, these trends pose risks to our food supply as well as the quality and safety of the food we eat.

A related problem is the enormous amounts of water modern agriculture uses. Towns and cities that require clean drinking water increasingly are in competition with farms for the finite amount of water available from streams, lakes and our fast-depleting aquifers. The problem of cities near to running out of clean water grows worse every year.

Keeping our lakes and streams safe from pollution requires constant vigilance. Even if we stopped all industrial pollution, agricultural runoff would still dump millions of gallons of residual chemicals, fertilizer and animal waste into our water supply with every rain—along with megatons of topsoil that wash off farms and into our streams. Fracking for natural gas puts still more chemical contaminants into our underground aquifers.

The fruits and vegetables we love to eat come directly from the earth’s soil, while the meats we eat were raised on plants that grow from the earth’s soil. It therefore behooves us to take care of our soils, because our lives depend on the food that depends on the soil.

Across the United States, as indeed around the world, nutrients have been gradually disappearing from the soils on which we depend for food. Crops grown decades ago were much richer in vitamins and minerals than the varieties most of us eat today. Our fruits and vegetables grow a little less nutritious with each annual crop. Few things could possibly be so directly detrimental to our children’s long term wellbeing.

My fellow Americans, we simply cannot keep on this way. We are steadily wasting and using up both the water and the topsoil we require to feed ourselves. The earth makes new topsoil in a natural process that is many times slower than the rate at which we are depleting the nutrients in our remaining topsoil. Natural rainfall can no longer keep up with the rate at which we are using up the water stored in our aquifers.

In our western states the mountain glaciers we always depended on for fresh water are melting. Glacier National Park is dying—where there used to be 125 great glaciers, today only 25 remain and these are expected to be gone within thirty years. What will we call the park then? Annual snowpacks are melting too, and this poses serious problems in our western states which depend on snowpack for up to a third of their fresh water.

When we walk down those supermarket aisles of abundance, it’s easy to forget that every bite we eat ultimately grows out of the ground or is harvested from the world’s waters. If farming and fishing stopped today, every grocery shelf would be empty tomorrow.

If my words sound more worrisome than you are accustomed to hearing on these matters, be assured:  the threat is real. It just happens that politicians hate to talk about unpleasant things that might cost them some votes. My fellow Americans, we are w-a-a-y overdue to be squarely facing these unpleasant things, because they are in fact a very real threat to our future. We cannot ignore them. We have no choice but to face these very serious problems, and—for our common good—we must find new ways to deal with them.

Accordingly, I am taking action on some things that I can do to deal with them. Just as I earlier mentioned restoring environmental regulations, before the sun sets today I shall sign an executive order directing every federal agency to examine, on an emergency basis, every other type of federal regulation that has been eliminated, reduced in scope, or otherwise diminished in its effectiveness in recent years.

Where any such elimination or reduction increased risk—or reduced protection—for our citizens, workers, consumers, our food supply or the public interest more broadly, quick action will be taken to restore those regulatory safeguards which should never have been diminished in the first place. Here too, quick repeal of that subversive Congressional Review Act is needed for restoring regulations, and I earnestly ask the hand of Congress in partnership for these corrective actions in the common public interest.

I will also shortly send to the Congress a bill fully restoring to the Department of Environmental Protection the staffing and budget it needs in order to carry out its important business of protecting our waters, topsoils, natural habitats, the air we breathe, and the safety of our food supply—all this in the common interest of every American.

In 1970 it was President Nixon who said “Restoring nature to its natural state is a cause beyond political party and beyond factions…it has become a common cause of all the people of this country.” President Nixon was exactly right, and he soon signed the bill that Congress passed creating the U.S. Environmental Protection Agency. In short order there followed the Clean Air Act of 1970, the Clean Water Act of 1972, the Safe Drinking Water Act of 1974, and the Toxic Substances Control Act of 1976.

These four laws, and others like them, were designed to protect our living environment, and our food and water, from people who don’t give a fig where they dump their wastes. We, the inheritors of all that good stewardship a half century ago, are now responsible to do our job and update all of these good laws to peak relevance for these modern days. I have directed the Environmental Protection Agency to prepare the updates as their highest priority, and as soon as the congress follows through I will sign them.

Tomorrow I will submit another bill asking the Congress to place two new legal requirements on the Office of the President, as follows. One:  Every federal office subject to appointments by the President shall be filled within four months after a president’s inauguration, and vacancies occurring thereafter shall be filled within sixty days. And two:  Every presidential appointee, including those subject to the advice and consent of Congress, shall be fully qualified for the job to which he or she is appointed or nominated, and job qualifications shall be objectively documented by the United States Civil Service. I will sign this bill as quickly as the Congress can get it back to me.

In the meantime I will be about the business of appointing good qualified people. I have no use for self servers—or “yes-men”—or ideologues who care more about being right than about the common good for all Americans. I want all my appointees to be bonafide experts who know more about their subjects than I do, good people who I can trust for good advice when I need it—and that, I assure you, will be just about every day.

As president, I owe it to you, fellow Americans, to ensure that the people I assign to run our government are the most highly qualified available, and that they take up their duties quickly. And so, inside of four months, I shall make all these new appointments with this promise to you:  my appointees will not be here to get rich, or to make a name for themselves, or because they donated political money. I will ask them to come here and serve because they are experts in their fields, and are the best qualified people I can possibly find for the jobs needed to responsibly run our government.

I would like to announce a few other farm-and-environment-related bills while I’m on the subject. Soon to be promulgated, these will ask the Congress to fund major new initiatives including—and not limited to—examples such as these:

Before moving on to my next subject, let me just add that these environmental and farm initiatives are but beginning steps for getting us going in new directions. New directions have characterized our republic from its beginning, and our willingness to innovate is precisely what has made America the greatest idea in the history of the world.