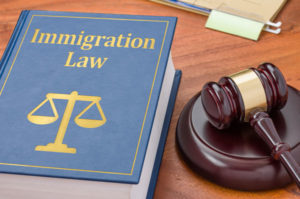 I want to give an example now of how to make our national unity real—by addressing head-on a subject that has been causing needless dissention in recent years. My fellow Americans, we have an immigration problem—and, together, we are going to fix it.

We are a nation of immigrants. Immigration of foreign nationals into the United States has been prominent through our nation’s entire history. Unfortunately, there have always been some older immigrants who reacted with bias, with unkindness, against whatever groups were the newer immigrants of the moment. It seems to take some people a generation or two to get over such unworthy behavior. Worse yet, in recent years, issues surrounding immigration has become disgracefully divisive and dis-unifying.

This didn’t have to happen—there were politicians who deliberately exploited the issue to divide us against each other. I ask every American to help me put a stop to it. In a society built entirely by immigrants, this recent dissention is beneath all of us. Every last one of us can do something to stop the unworthy prejudice that has been pulling our national unity apart. Please do whatever you can. However you go about it, do it with dignity for yourself, and with compassion for the affected immigrants who have so much at stake.

You do your part and I’ll do mine. As your President, here are three things I can do, and I intend to do them as soon as I possibly can.

One. Young people who were illegally brought here as children through no action or intent of their own—the so-called Dreamers—cannot be blamed for growing up as Americans. It is as illogical as it is disgraceful for anyone to cast aspersions on these young people for a circumstance in which they had no voice and no choice.

They have done nothing wrong. America is the only home they’ve ever known. They speak the common English and know the latest fads. They are as much a part of our society as every other young American who happens to have been born here. In point of fact, these innocent young people are part of us—they are us. Let no bias or prejudice against them raise its ugly head during my watch, for I will do everything within my considerable power as president to defend and protect them, and their rights.

I intend to send to the Congress, this week, a bill declaring these young people, without further ado, full and legal citizens of the United States of America.

Two. For whatever reasons—reasons that are long past and cannot be changed—the United States government, and the governments of every state along our borders, have over the past four decades allowed—or failed to prevent—millions of foreign nationals to illegally enter the United States. Many more entered legally and then stayed after their legal time limit ran out. The estimated total is now more than eleven million people.

Though having entered the U.S. illegally, these immigrants are everywhere. At least eight million are estimated to be in the U.S. workforce. Most of them have so completely integrated into American society, that they have become, in fact, productive citizens who participate in, and contribute their fair share to, our nation’s daily business.

It is impractical beyond belief to consider rounding up and deporting eleven million people who have become Americans without legal status. Nor can we in good conscience now, after all this time, rip them out of the homes, jobs and social connections they have so normally established for themselves.

Disrupting their lives through any determined effort to deport them all would simply be immoral, and it would degrade us. We must be better than that. They wanted to be in America so passionately that they came here illegally—usually at great cost and great risk to their lives. Indeed, hundreds have lost their lives trying. Our only reasonable option at this late date is to forgive their transgression and let them get on with their lives.

And so I now do—here in this moment, before the whole nation, and may my words lead the way for us all. To you immigrants who entered my country illegally, but are now trying to lead a good and productive life, I say:  I forgive you; and I recognize your worth. I am going to send to the Congress a bill with my strong recommendation to enact a one-time amnesty, legalizing the many immigrants who now live here in violation of U.S. law, and therefore lack American citizenship and the vital legal rights that go with it.

I also tell you this amnesty will have conditions, because you chose to break our laws when you could have used our longstanding process for coming in the legal way.

My conditions will require you to register, within a limited time, as an illegal immigrant. After registering, you will be required to attend American Citizenship classes in order to learn certain civic lessons that every American should know about living in America, and about respecting the laws of this nation which was founded on the rule of law. Good citizenship requires a minimum level of education, along with at least basic knowledge of American history, so you may understand why we so treasure the rule of law as opposed to the arbitrary dictates of kings and tyrants.

Education also is extremely important for democracy. Our founding fathers had great fear that un-educated voters—knowing no better and easily misled—might vote a barbarian into office. They took a chance on democracy anyway, though they hedged their bets by barring from voting all women, all slaves, un-propertied men, and some others. We have improved quite a bit over those early days in this democratic republic, but nowadays we place even greater emphasis on voters being educated well enough to vote intelligently.

You will also be expected to read, write and speak at least basic English, because we are an English-speaking nation. All languages are welcome here, but English is our nation’s first language. If you fail to register under terms of this amnesty, or to complete the prescribed citizenship classes, you will be deported without possibility of ever returning.

Three. The problem of illegal immigration got completely out of hand for far too many years, and this shall not be permitted to happen again. Here is the rule: We Americans have very specific laws we long ago put in place to tell foreign peoples how they may legally immigrate and become naturalized citizens. If you want to become an American, obey our immigration laws. We will no longer tolerate illegal entry into our nation, and I will recommend that the Congress make this our last and final amnesty, ever.

We are not going to waste any more money on insulting boundary walls between us and our good neighbors in Mexico and Canada. But we will take every reasonable measure to ensure that illegal entry into our country is brought to a complete halt. Some very sophisticated technology is more than adequate to the task of monitoring every square foot of our borders—urban, desert, water or woodland—and we are going to use it.

Over coming months, and with all due speed, such technology is going to be put in place along one hundred percent of our international borders. It really won’t cost all that much, but I guarantee that it will effectively stop illegal immigration. After this one-time amnesty, I say to would-be immigrants thinking about crossing our borders illegally:  Don’t waste our time; if you try, you will be sorry.

Now I want to direct a few words on this subject to American citizens who have failed to distinguish themselves on both sides of the immigration argument in recent times. To all of you I say:  Read and learn your own American history. There has never been a time since 1776 when we did not depend on foreign immigrants coming here. They populated this nation—and every one of our families began as immigrants, in dozens of ethnicities.

It also is generally true that there has seldom been a time when our immigration policies were so completely fair that they did not discriminate for some people and against others. Discrimination on the basis of irrational prejudice should never have happened, though at times it did. Immigration quotas need to be understood in a rational context.

No nation can afford to act as if it simply has no borders—throwing its doors open wide to every last soul who just might like to wander in from anywhere on earth. No nation on earth does so. It is foolish to argue for indiscriminant open borders, so if you want to be taken seriously do not make that argument.

It is entirely reasonable to set conditions for how many immigrants we will accept each year. Also reasonable are conditions on how, and whether, we will accept refugees from areas torn by war and violence, areas with many people who wish to harm us. No one should be so naïve as to think harmful intentions are not real in some cases—and that includes cases where we really have no way to read a would-be immigrant’s mind.

It must be understood that even in the most ordinary, benign circumstances, it is totally reasonable to set conditions on who will be allowed to legally immigrate into our country. For example, it is a fact that we have a serious shortage of doctors in rural counties all across this nation. If you had two eligible immigrants seeking entry, one a skilled doctor, the other an unskilled laborer, which one would you favor? Do you think you might set conditions on where the skilled doctor should spend her first five years?

Such practical choices do apply, and our best judgments must be applied. Our nation is not so large that we can afford to take in all the huddled masses who might yearn to live here. The old American frontier is long gone—what used to be frontier areas are now in many cases overpopulated. I want to be very clear that, as long as I am president, legal immigration quotas will be maintained at reasonable levels with reasonable conditions, and illegal border crossing that flouts our immigration laws will not be tolerated.