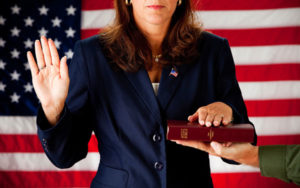 The Legislative version:        The United States Constitution stating verbatim as follows: “…and he [meaning the male-gender President] shall nominate, and by and with the Advice and Consent of the Senate, shall appoint…Judges of the supreme Court…”, and in absolute furtherance of the letter, spirit and unarguable intent thereof, it is hereby enacted into law that upon a Supreme Court justice’s permanent departure from the court, by death, choice or circumstance, he [the male President] shall within thirty days of said departure nominate a successor and the Senate shall within the following ninety (90) days render its advice and consent for his [the male President’s] appointment of that nominee, provided however, if the Senate default on its advice and consent duty by the close of the ninety (90) days, that nominee shall, by default and without further ado, become and be the presidentially appointed replacement for the departed justice in accordance with the Constitution’s specific stipulation of his [the male President’s] appointing powers;

Nothing in the Constitution or in this Section or in any other law shall be construed as binding on a female-gender President, regarding the powers of whom the male-gender-focused Constitution is now and has ever been silent, and a female President may at her [the female president’s] option appoint a replacement justice to any Court vacancy without reference to Senate advice, consent, default, failure to act, abdication of duty, temper tantrum, floor fit, or any other in extremis sort of reactionary Senatorial behavior.

Every sitting justice of the Supreme Court shall retire no later than his or her attainment of the age of seventy five (75) years, and the President shall thereupon nominate and appoint a successor as herein specified. An odd number of Supreme Court justices shall be maintained to ensure the Court’s ability to at all times avoid hung decisions. If any unforeseen circumstance of Court vacancies should chance to arise and bollix up this tie breaking ability, he or she [the President] shall immediately end that circumstance with multiple nominations, even if this necessity result in more than nine (9) justices, provided that he or she [the President] shall ensure that the resulting total number of justices shall be an odd number and that referring to this action as packing the Court may earn the referrer one day of observation in Gambling School.

(Note: For context and explanation of this page refer to Populist Corrections on this blog)