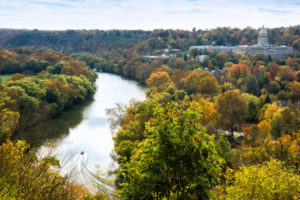 The Peaks Mill-versus-Buffalo Trace controversy has raised the issue of “growth” in Frankfort and Franklin County to a higher level of attention than perhaps ever before. How—and whether—our community should strive to keep growing has needed public debate for years, but focus on these questions has been random and superficial at best. I cannot remember another time when our community’s future was discussed so starkly in terms of the values that now confront us in this disagreement over business expansion versus resident quality of life. The differences in fundamental values are very clear indeed.

Fairly constantly in this newspaper and elsewhere appears the sentiment that we must seek continual growth in order to attract ever more businesses and ever more residents in order to raise ever more taxes to pay our ever-rising costs to maintain the quality of life that prevails—and has long prevailed—in our community. Such rote declarations fail to convey the fact that only certain kinds of growth are good for our quality of life, while other kinds inevitably degrade quality. I find it remarkable that anyone still believes we must have unending growth, given that human population is already well above the earth’s carrying capacity and will sink our ship in this century unless hungry mouths stop going up while crop and food production keep going down. In these few paragraphs I want to clearly distinguish between good growth and bad.

When we gain new home-grown entrepreneurial businesses, such as Andy’s Artisan Breads, Mami Monchita’s or Camden’s Auto Repair, their profits get re-spent, on average, about seven times right here in Frankfort. The wages local entrepreneurs pay their employees are locally spent, for instance, on groceries and movies, restaurants and home maintenance. Every time these dollars get re-spent here in town by people who live here, Frankfort benefits again and again. Economists call this the “multiplier effect,” which simply means that every $100,000 we spend through our local home-grown merchants will ultimately yield somewhere around $700,000 in local economic benefits before the dollars eventually leave town.

But such local economic benefits simply don’t happen when the profits leave town immediately—and go to, for instance, Sazerac Company, Incorporated, the owner of Buffalo Trace and a zillion other assets. True, Buffalo Trace employees spend their salaries here, and those dollars beneficially turn over in the local multiplier effect. But which do you think is greater—those local salaries, or the colossal fortune that leaves this town every week to be banked far, far away by Sazerac, Incorporated?

Anyone under the impression that Buffalo Trace represents Frankfort’s proud old tradition of local bourbon distilling should think again. A simple Google query will tell you that the Sazerac “corporate family,” owned by billionaire William Goldring, encompasses 22 companies and nine distilleries, operates in 112 countries, and controls over 450 of the world’s most popular brands of whiskey, cognac, port, tequila, vodka, gin, rum, liqueurs and considerably more of an alcoholic nature. With holdings scattered from Montreal to its corporate headquarters in New Orleans, this corporate conglomerate moved into Frankfort only in 1992 when Sazerac and a Japanese firm bought out The Leestown Company and George Stagg Distillery. Seven years later the historic Wilkinson Boulevard complex was re-branded under a new flagship brand they decided to call “Buffalo Trace.”

Now most of us who like an afternoon toddy have no bias against whiskey, the distillers who make it, or big corporations like Sazerac that grow fabulously rich selling it. We recognize that Buffalo Trace, like other corporate employers who put one of their factories here because of our lower-paid labor force, contributes a share of our community’s jobs, salaries and taxes, which we all appreciate.

But let’s not overdo it. It is self evident that any business headquartered in some distant city is going to remove far more dollars from Frankfort than it will leave here to benefit our local economy. Fawning adulation of our whiskey makers and alcoholic tradition by some local folk is tiresomely misguided, as is ill-informed preaching that favors growth just for the sake of growth. Neither of these has anything to do with the smart way to balance both economic wellbeing and quality of life in our fair green city.

Frankfort is not Whiskeytown or Potterville—we have lots of other traditions, noble and meritorious, that equally deserve attention during recurrent urges to “re-brand” things, a silly marketing concept that moves merchandise around on the shelves so you can’t find what you want. No, we can do better. Here are exactly what I think our local governance priorities should be for the foreseeable future.

Priority One: Promote and assist creation of new local entrepreneurs. People who live here and have the moxie to start small businesses care about local quality of life and economic wellbeing in ways no out-of-town corporation ever will. Our two local governments can and should enact major tax dis-incentives aimed at preventing any empty store, from downtown to suburbs, from remaining vacant for more than one year. It is disgraceful to be advocating for more pollution-generating whiskey warehouses anywhere in the Franklin County countryside while a hundred and more of our former retail stores linger on as empty eyesores, wasting valuable infrastructure as they sit there contributing absolutely nothing to our potential seven-times local economic multiplier.

Priority Two: Develop our riverfront. The beautiful Kentucky River’s big S curve through the heart of our town—a unique state capital—is a world-class attraction with absolutely enormous unrealized potential. Every year that its two banks remain inaccessible to our nature loving citizens is opportunity wasted. The Seine through Paris and Danube through Vienna have nothing on our wonderful tree-lined Kentucky River—except that those waterfronts are available to their people, and ours is not.

Any local politician who dawdles as much as one year without introducing an initiative to advance and complete the development of our riverfronts between the East-West Connector and Kentucky avenue, or at least voting for such initiative, should be turned out of office. Year after year we wait, and wait, and wait, while riverfront change proceeds at a snail’s pace. I say get on with it, you would-be leaders, for the betterment our people, our economy and, as Paul Sawyier would say, our sweet old town.

No other local development priority ranks in the same league as these two. Neither of them involves “growth.” They don’t make Frankfort bigger, they make it better. Pulling in ever more corporations to provide a few more jobs while exporting our common wealth is not smart. Unlike the relatively steady-state economy our small local merchants represent, corporations that must forever grow, merge, buy out and grow again, ever scheming to eliminate their competition, simply exploit us.

Like Fayette County’s reserved horse farms, we should in fact be specifying the places where we don’t want growth outside our industrial park setasides. Phooey on the shortsighted urge to make Frankfort “grow” until it builds over all the green fields between Georgetown, Versailles and Shelbyville. I prefer our friendly smaller community where a locally-owned Pic-Pac and Jessie’s Framing contribute far more to our quality of life than a dozen Walmarts, Krogers and chain anythings—not to mention excessively expansionist distilleries riding a transient worldwide whiskey boom. We really should be asking—exactly why is it that alcohol is currently so booming…and how much longer will it last?

Don Coffey, retired from federal and state governments, pursues interests at the interface of science and spirituality, with special focus on how to apply the social, economic and ethical implications to practical concerns of daily living in his chosen community. Contact him at dscoffey9@mis.net.