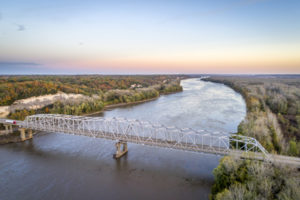 Let’s consider now a common sense update of a very dependable old technology—power generated by flowing water. This simple innovation offers the prospect of turning what has been called “a problem” into one of the most positive innovations in our nation’s history. For good measure, its symbolic significance is right up there with the golden spike. But we must build up to it, speaking first of responsibility.

Our nation depends on electric power, and lots of it. Electricity is today the very foundation of modern civilization. We require more electricity every year—we need it to be plentiful, dependable, and cheap. For more than a century we very sensibly depended on coal to generate our electricity, because coal was plentiful, dependable and cheap. Mining coal out of the ground moreover created lots of jobs which in turn provided living income for millions of Americans. It made perfect sense—at the time.

It’s very much like my grandfather, who all his life farmed burley tobacco as his main cash crop. He and millions of small farmers like him earned their livelihood through the honest hard work that goes with raising tobacco—and it is, be assured, hard work. Those farmers inherited a way of life from their fathers, none of them having any idea that tobacco causes cancer. Even scientists and doctors did not know how harmful tobacco was, so growing tobacco made perfect sense—at the time.

But those times were before we became aware of the dangers of putting tobacco smoke into our lungs and coal smoke into our atmosphere—before we knew the awful societal costs of tobacco and coal. It was a time before we understood that toxic chemicals and heavy metals in coal smoke were harming our children’s health and the air we breathe.

We had no idea that the carbon dioxide in fossil fuels—coal, oil and natural gas—could actually heat up the atmosphere around the entire earth. We did not know that global warming would cause extremes of weather—floods, droughts, wildfires, rising seas—to threaten the very civilization our children will inherit from us. We simply did not know.

But now we know. And knowing raises our responsibility. Today, no informed adult on this planet has any excuse for ignorance of this serious threat to our future and, worse, our children’s future. It is way past time to take responsibility for our own actions that we’ve been putting off for decades.

There has been much talk but small action on phasing out fossil fuels by switching to renewable energy sources such as windmills and solar cells. Wind and solar are good options—though the wind doesn’t always blow and the sun doesn’t shine at night—and we must fully develop them. But we also need to focus new attention on an old, very dependable source of cheap electric power that has been right before our eyes all along—and we have been failing to recognize its enormous potential.

That source is our rivers. America is a land of beautiful rivers, mighty rivers, that forever flow. And unlike the wind and the sun, their flow never stops. A river’s constant powerful flow can easily be turned into cheap, dependable, abundant electricity.

Best of all, it can be done without huge dams backing up huge lakes so that water can fall down through generators. That obsolete model has served us well, but now that we’ve come to understood the harm done to our riverside ecologies, habitats and wetlands by those thousand of dams all over America we’re beginning the long task of removing them. We don’t need dams anymore, we’re beyond that. The very fact that rivers never stop flowing can be used to generate far more electric power than we’ve ever dreamed of.

We begin by initiating pilot projects across the nation to determine best ways to use horizontal tube turbines for generating electricity. A tube turbine is simply a small water-tight generator—smaller than a car—turned on its side and secured inside a large protective metal tube that can be submerged just below the river’s surface.

The river’s current flows through the tube, turning a propeller which spins the turbine to generate a constant flow of electricity. Multiple tubes can be hooked together in series, one behind the other. The series is secured to the riverbank by a couple of long metal arms which are hinged to allow the tube turbines to rise and fall with the water’s level in every stage from low water to flood.

Hitched in a series, a few dozen of these tubes can generate enough electricity to supply several hundred homes and farm operations. By multiplying them along unused river banks, these simple, cheap generators can replace whole power plants—and take over the job of providing electric power for America’s cities.

After initial construction, the only cost is maintenance. Large debris such as floating trees is turned aside by a deflector at the upstream end of each series. Small debris in the water flows right on through the turbine, and the turbine keeps right on turning, generating extremely low-cost power for the United States. There is no coal or natural gas to buy, ever. There is no coal ash or nuclear waste to be somehow got rid of, ever. There isn’t even a costly heat exchanger like those few power plants that tap the earth’s geothermal heat. Best of all, there’s no carbon dioxide involved at all. Ever.

There is only the flowing water—and the river keeps on rolling along, year after year.

Our great nation has tens of thousands of miles of rivers—and every one of those rivers has two banks. Around ninety percent of those banks are now wasted space, unusable for most purposes. But they are perfect for placement of tube turbines to generate plentiful, dependable, and cheap electricity for nearby homes, farms, towns and cities.

Doing so will also enable sensible decentralization of our nation’s power grid. By generating electric power close to where we use it, we reduce the need for costly, unsightly, high power lines across our landscape. Moreover, as existing power plants are retired, we won’t need to replace them. We won’t need big dirty power plants anymore.

Think of the amount of electricity we can generate, throughout the American heartland alone, by putting to good use all those hundreds of miles along the banks of the Ohio, the Missouri and Mississippi rivers—not to mention the Wabash, the Tennessee, the Cumberland, the Kanawha. What large ever-flowing river is nearest your home?

Installing tube turbines along unused sections of the banks of our nation’s many rivers—those with year-round steady flow—has potential to provide far more electricity than we are likely to need in this century. Pilot projects will refine the numbers on how many tube turbines are necessary to supply rural areas, towns and cities of various sizes.

In modern dollars this nationwide project—call it the River Energy Initiative—will be a lot cheaper, and far less difficult, than was creating the Eisenhower Interstate Highway System. But it will be at least equal in its beneficial impact for the entire nation. It should be the first priority among hundreds of major new projects to properly, finally, update our nation’s aging infrastructure—including our interstate highway system.

The River Energy Initiative will create millions—yes, millions—of new good paying jobs right here in the USA. The new jobs will enable millions of struggling American families to lift themselves back up into middle class living where they should have been all along.

And that’s not all. Many of the riverside rights of ways where these tube turbines are installed can be turned into public parklands—natural areas suitable for hiking, biking, fishing and recreation—with scenic roads to facilitate maintenance of the turbines.

To get on with it, we need a Congressional bill creating a River Power Administration—a new federal agency responsible to install tube turbines along our national waterways, and maintain them forevermore. This agency must have full authority to contract with private companies for construction and maintenance, must guarantee living wages, and the bidding rules should be very attractive to new, small and local private entrepreneurs.

Finally, this new source of electricity—easy to build, cheap to maintain, and operating with none—zero—of the cost required to operate power plants—can usher in a new era in the home economics of living in the USA. Electricity from the River Energy Initiative should be available at no charge for the normal residential needs of every home—rural and urban—that has household income below the federally defined poverty level.

Regardless whether you own or rent your home, residential households should pay an electricity bill only when their aggregate household income is above the poverty level. Where there is a bill to pay, the bill should be reverse-graduated so that the less electricity you use, the less you pay per unit of electricity used.

Summing up, these measures would in a single stroke 1) provide incentives against excessive and unreasonable consumption of electric power; 2) make our electricity cheaper and more dependable by decentralizing the nation’s entire generating system; 3) facilitate modernized distribution by upgrading to a smart grid nationwide, 4) establish an important component of economic rights for low income Americans; and 5) create a vast pool of new jobs to build the system and maintain it.

Finally, I must mention how enormously this environmentally-friendly River Energy Initiative would help remove carbon pollution from our atmosphere—in fact, from the air around the world. It certainly would be the greenest project in American history.