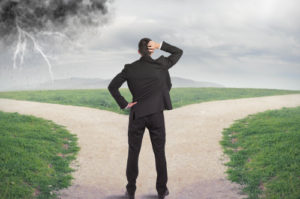 One’s view is always partial,
and thus needs to remain open for revision.

Think back to some point in your life when you encountered a situation which left you no choice but to choose between at least two alternatives.

In this remembered real situation you came to a fork in the road. It is certain that you made a choice because the situation did not allow you to not make a choice. Most important of all, you could not be sure at the time which path was “better.”

On what basis did you make your choice? Do you remember what that basis was?

Equally certain, that choice reflected your values. None of us ever makes a decision without reference to the things we value. This is true even if we keep our values far in the background, rarely thinking about them on a conscious level. Even if we don’t think about it, we value whatever it is that we hold dear and regard as worthy and desirable – a feeling, such as security, love or self respect; a thing, such as a car or money; or even an idea, such as free trade or religion. Confronted with choosing among such things, our choices usually reflect the most-valued option.

Are you consciously aware of your values? What are the things, the conditions, the ideas you truly value? Few people answer this question well or quickly. Many have not consciously thought about what they value for quite some time; some have never thought about it at all. But the values are always in there, plenty of them, whether they’ve been thought about or not. For readers who might be interested, a values-identifying exercise appears at the end of this section.

Concerning your long-ago decision:  given the certainty that you had values, recognized or not, it is equally certain that the value-influenced choice you made in that remembered long-ago situation was made through a values-based filter. This filter has been previously introduced as a mental condition called a “mindset.” The value-laden mindsets a person may carry around on different topics might be something like these examples:

Value = Security        mindset:  There is no security, somebody’s always out to beat me.

or:  I’ve never been truly loved. I doubt I ever will be.

Value = Self respect  mindset:  I like myself. I couldn’t help others if I didn’t.

or:  Why are some people so well liked? I never feel that way.

or:  I keep this four-wheeled cash eater only so I won’t have to walk.

Value = Free trade     mindset:  Free trade is the sure path to jobs and wealth for all.

or:  Trickle down? Nuts. The rich get richer while I struggle for every dime.

There are of course many “ors” for every example. If you’re like most people you probably aren’t much aware of your mindsets (plural, because we all have many, in many categories). Just as they don’t much think about their personal values, people mostly don’t think about their mindsets. Mindsets are likely one of the most un-thought-about aspects of our daily lives. We simply get them…and we usually keep them. Often we hang on to them for dear life. Over time, most mindsets tend to grow stronger rather than diminish. Twenty years ago you leaned, say, a little to the left, or the right. Today your political mindset has become double yellow dog liberal democrat, or raging Tea Party pissoff patriot. Your political mindset(s) have, shall we say, ripened, intensified.

Intensification usually occurs as we grow older – though some of the strongest mindsets you’ll encounter are in the young, especially those not-quite-adults who haven’t lived long enough to experience very many real facts or develop clear understandings about anything at all. Quite unfounded opinions are often prominent in such younglings. Sadly, one too often encounters equally unfounded opinions in the middle-aged, the old, the very old:  I’ve believed this all my life and nothing’s gonna bygod change my mind now!

The opposite can also be true of course. You will meet people of every age who seem thoughtful about their opinions, consider carefully what they accept as confirmed facts, are conscious of their mindsets and can even change them. When such a person learns new facts, and modifies a mindset based on new knowledge and improved understanding, this is called open mindedness. It also is sometimes called “wise.” The mindsets of such persons are flexible, neither dogmatic nor rigid, are open to change when new evidence suggests change is appropriate. In rare cases one encounters individuals so very open minded that their every belief seemingly is provisional, always subject to change if new evidence comes along. Minds so open are rare indeed. They are sometimes derided as “agnostic” – with implication that the deep honesty of true agnosticism is a blameworthy fault – by other minds that are substantially less open.

A premise expounded throughout this book is this:

“Good” and “bad” being fairly mushy concepts, what can make a mindset good or bad? On what basis dare I present to you my (quite strong) opinion that open mindsets are good and closed mindsets are bad? My basis is this:

If a mindset has the effect of harming others it is bad. If it leads to helping others, it is good. Where actions (or words, or votes) based on a mindset have no effect on others, or at least do not harm them, that mindset can be said to be neutral – it is merely a potential, neither harmful nor beneficial. But in fact neutrality is rarely the case. In a majority of instances, the actions we take, the words we speak, the votes we cast, do affect other people, and the helpful or harmful impact on others can range from negligible to very large indeed.

Consider some previews from daily news media.  Are African villagers helped or harmed when their government, without their knowledge, sells off many square miles of rich farmland, including their village, to an Asian or Middle Eastern nation for that nation’s use in growing food to export home? This very thing is happening a lot nowadays. How would you describe the mindset of the seller? the buyer? Do you feel personally helped or harmed by any recent actions of the U.S. Congress? the Supreme Court? What mindsets do you feel were at work among the Congressional members and Justices? To get perfectly personal, which do you hold more valuable:  to “pay” employees a minimum wage? – or to “earn” for yourself a living wage? Have you considered the important difference between minimum wage and living wage? Do you feel every retail merchant is out to “serve” you (as they always claim) or (as some say) to gouge you to profit themselves?

People call these “opinions” or “attitudes,” but they soon grow into mindsets. Whatever you may think in response to these questions, you think it inside your mind. One’s every word and every action begins as a thought inside one’s mind. And there, all hidden away in the mind’s impenetrable privacy, is where our mindsets reside. They filter the new information coming into our minds, so that we either possess objective facts or, more subjectively, hear only what we want to hear. On the way back out, our mindsets directly influence our every thought, every choice – every decision, action, word and vote.

When it comes down to it, that one-path-or-the-other fork in the road that your mind chooses to act on, to vote on, to speak about – based on your values and filtered through your mindsets – can make quite a difference in how other folks are affected by your choices. And the affect can be writ large or small: a President decides to send people’s sons and daughters into combat in the ever-turmoiled Middle East; a very nice older lady deeply distracted by her daughter’s recent marriage to another woman backs into your car while exiting the flower shop parking lot. Your mindsets can, ultimately, have impact on what I value, like it or not. And don’t forget, the converse is equally true

We’re all in this together, and it would be nice if we all consider that fact when making choices which, based on our personal values and mindsets, can be regarded by others as helpful or harmful based on their values and mindsets. That’s what this book is about.

Now all this might seem rather abstract, painted in broad terms. Do mindsets really matter all that much? The chapters which follow supply details, and by the time we’re finished I believe you’ll agree that mindsets matter very much indeed. We’re going to wander over several broad topics that are rife with mindsets. If their relevance to values, to help and harm, to good and bad are not amply apparent yet, please read on, for such relevance will become painfully apparent as our path progresses through the book’s topical chapters.

For example, while it probably is true that relatively few people are very much concerned about the subject of evolution, a small percentage of concerned Americans dislike it so passionately that their mindsets affect in varying degree just about everyone with a child old enough to study biology in a public school. In many ways subtle and otherwise, most biology textbook publishers exhibit exceptional care in how they treat the subject, with an eye to minimizing damage to their $ale$ of textbooks to all the schools that teach biology to students whose parents are all over the map about the course of study called evolution.

Part I will examine evolution in two contexts: “long” and “fast.”  The long, slow variety comes first because it is essential background for the fast evolution which follows. Some readers may stop reading right here because they don’t believe in evolution. To such firmly closed minds, bon voyage.

You others should know that Long Evolution concerns the unfolding of our universe over some 14 billion years. If you feel certain that God exists, you may think of evolution as God’s very clever way of causing our solar system and planet earth to emerge over the last five billion years, and life to evolve on earth over nearly the last four billion. Fast Evolution, by contrast, doesn’t require a single billion, not even a mere million. It involves only the most recent sixty or seventy thousand years, particularly the most recent ten thousand – more particularly still, the immediate past three hundred years – the tiniest mere fraction in the grand scheme of things. Fast Evolution can also involve, may I just say, feeling quietly frantic concerning the upcoming eighty years directly ahead.

I speak of all these things as “evolution” because, at the end of the day, the word is simply a synonym for another common word: “change.” Evolution means “changing.” To change from one condition to another condition is to evolve. Certain closed mindsets fear the term evolution as a threat, undermining their religious beliefs, but all the word really means is “change.” And as we all know, everything, including ourselves, is constantly changing. Every last one of the trillion or so cells that make up your body has died and been replaced by a new cell over the past seven years, so how is it that you are still you?

The term evolution accurately applies to…everything. So if you’re not sure whether you believe in evolution, bear with me if you can bear to, for the Biblical version of the same story will be considered as well, and it requires only about six thousand years – a figure so very low it would choke a scientist. All these topics are rife with mindsets, all around.