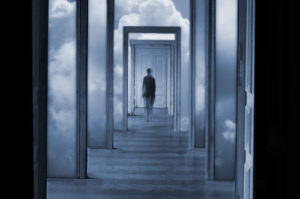 The evolutionary part of our tale wraps up with discussion of intriguing mysteries which  accompany evolution part and parcel, though they are unseen and unseeable. Some of these mysteries are so commonplace we unthinkingly take them for granted: e.g., wireless reception on cell phones, radios, laptops. Do you really think you actually understand how this happens? Read on. Science informs us of other mysteries found throughout our natural world and universe. Less noticed than wireless reception, these include – among many mysterious items – a batch of unexplainably precise numbers called “constants of nature” which, for no good or apparent reason, are integral to evolution of the universe and of life within it. If the numbers weren’t what they are, we would not exist. Do you understand this? No? Read on.

Then there’s the biggest mysteries of all, concepts we daily – blithely – refer to as “consciousness” and “mind” – i.e., the very essence of ourselves, our existential thinking existence. Have you ever tried to define these very common terms, or to discover how “experts” define them? Science – which we generally consider to be at the forefront of all knowledge – in fact prefers to simply avoid all these mysteries, so we shall be forced to consider some other context for them. When it comes to defining the most simple among all things, science has no guts. I will presently discuss such a context, which I call a “Godly Algorithm.” For readers of religious mindsets leaning to so-called “intelligent design,” be assured that this context will offer you no comfort, none. But it may well surprise readers of every inclination into rethinking old assumptions, old mindsets.

Since mindsets profoundly filter and influence the ways we unthinkingly think, Part II calls us to consider alternative ways of thinking that commonly produce mindsets. These chapters wander through some of the most popular ways of acquiring a mindset, particularly of the closed variety. One example is religion, with its doctrines and dogma which, by definition, mandate that minds must be closed. Closed is what religion is supposed to be – you want to join my church, you must agree to believe this, and not that. And most emphatically do not deviate from believing this and not that. God belongs to my church, not those others. Your immortal soul is at serious risk of eternal anguished torment in hellfire unless you believe what I tell you to.

Then there’s science, the arch-antagonist of religion – at least for the past century or so. Science – by definition the very essence of “open” mindedness – nonetheless harbors some of the world’s most tightly closed mindsets among those professed scions of objectivity, who purport to represent the very meaning of science: unreservedly open-minded inquiry, wherever it may lead. Do you believe scientific mindsets are inherently more open than others? – if you do I have a bridge I’d like to sell you, a real bargain.

Science and religion barely get us started. There’s a flock of pseudo-religious ways of thinking which produce many and perhaps more closed mindsets than science or religion. Two of the most prominent are economics and politics. Economically speaking, I ask again:  which does your mindset think more important, to pay a “minimum” wage? – or to earn a “living” wage? What percentage of political issues really involve, deep at the heart, economics – meaning somebody’s desire to make money, usually lots of it?

Why is there so dominant across America a mindset which sees collectivist communism and laissez faire capitalism as the only two possible economic options? Is there something in the American air which closes our minds to third options?

How many people do you know who think there’s no conceivable way of running an economy that doesn’t require choosing between – only – these particular two options? Here’s the apparent choice: 1) acquiesce to guns and brutal force that are necessary, unavoidable, to force people to accept communism’s unrealistic, unnatural collectivism against every grain of human nature; or 2) accede to capitalism, a wholly greed-based way of handling trade that is grounded in speculative stock market gambling which, after making a few people rich and many others comfortable, slowly but with accelerating inevitability divides society into a very few super rich and a whole gang of increasingly impoverished peasants who vaguely remember something called the middle class.

Why cannot they envision any third option? Or fourth, or nineteenth? Can any rationally thoughtful person really believe these are the only two economic choices available to us? If you subtracted out all the technological advances, have our social constructs really advanced very far from Medieval times and customs? Perhaps you’ve even heard this two-choice issue garbled as “communism versus democracy” – revealing thereby the speaker’s ill-considered failure to distinguish between an economic construct (communism) and a political way of doing things (democracy), unaware that they represent apples and oranges betokening bald ignorance and gross mental confusion.

Speaking of politics, are you for or against democracy? As to that, why were so many of our founding fathers dead set against the full-house version of democracy we have today, which  *gasp*  allows women, non-whites and other inferiors to  *choke*   vote on public issues which affect the interests of us righteous landholding Men? Internationally, why is it that our American government cannot seem to workably impose our cherished democratic ways onto the ultra-tribal Afghan and Iraqi societies – as promised when we invaded preemptively, righteously, claiming self defense, not oil, made us do it?

What about ultra-nationalism, like “giving away” “our” Panama Canal? Or “loyal patriotism” versus burning a red-white-and-blue piece of cloth which symbolizes our nation right or wrong? What’s important? Should Ku Klux Klan members be jailed, denied free speech, perhaps banned from voting as are the many ex-convicts who are unable to regain their entitled American voting rights even after having fully served their time? What about law-abiding naturalized citizens with Arabic names, or their third-generation offspring? Well, what about them? …do you suppose mindsets might be involved here?

Part III tries to lift us above the distasteful morass of closed mindsets and hypocrisy brought forth in Part II. It does so by heading off in altogether new directions, placing key emphasis on Open Mindsets and Third Options. New ideas and new ways of thinking will be examined as logical alternatives to business as usual. They’re not really new, of course, but they are not commonly thought about in any meaningful way by most people aside from a small minority dedicated to following the evidence wherever it may lead.

I hope these things will open mindsets just a bit, to new ways of thinking that might not otherwise have happened. By the end of this book you will know why I think that, for the few years immediately ahead, new open-minded thinking is more important that at any time in the past ten thousand years. If you decide you agree with me, please join me in talking about mindsets, and advocating for opening them.

As you proceed with the reading of this book it would be well to have your personal values close to the forefront of mind. This book says little about personal values as such, but they are much at the heart of all you will read here. So let’s give them a moment.

I met the values game many years ago at a seminar for would-be managers in training. For one week our roomful of young professionals listened to brilliant lectures that made our minds navigate new tracks, new ways of thinking. We participated in “real life” games thoughtfully designed to direct our energies into dynamic new ways of thinking and acting that would be helpful for our respective agencies and organizations. It wasn’t really a “game” as much as it was an exercise designed to force us to think in new avenues where, the instructors rightly surmised, we were not accustomed to traveling. It was so simple, this game-exercise, but its unexpected impact on my thinking would turn out to be profound and long lasting. Maybe it will for you too. Try it out the next time you’re in company with a small group of, say, five to ten people.

Step 1. Distribute five note cards and a pencil (with eraser) to each person.

Step 2. Instruct the group to “Write down the five things you value most, one on each card.” Don’t get drawn into defining your terms or explaining what is meant by “things” or “value most” – each participant must define those terms for him/herself. At most, amplify by saying “the five things that are most important to you in your life.” Stop there.

Step 4. At five minutes, advise them that “The five minutes are up, we are now going to proceed.” And in fact proceed, even if some have not yet written down all five values.

Step 5. State as follows: “Select the one card representing the thing you value least among the five things you wrote down, and throw away that card.” They should drop the least valued card, or set it aside away from their other cards. Give them a minute to decide, as this decision will be very hard for some people.

Step 6. With four values remaining, state “Throw away your next least valued card.” Again, give them a minute or so to decide among their remaining four values.

Step 7. With three values remaining, state “Throw away another card.” Allow some time, for real emotional difficulty will usually be apparent in least some participants.

Step 8. With two values remaining, state “Throw away another card.” Allow a minute or so. While some will choose immediately, others will anguish over the choice.

Step 9. Instruct them to “Re-stack your five cards in the order in which you threw them away. Put your highest-value card on top, the least valued on the bottom.”

Step 10. Wrap up by advising as follows.

If discussion begins, let it play out naturally. Try not to lead, let the participants direct the discussion. The exercise is over.

The Values Game invariably is popular after it has been experienced. With a little practice you can introduce it to larger groups. Be prepared for anything – while some are little affected by examining their values, people have been known to break down and weep or even stomp angrily from the room. You are responsible for having led them to consciously confront their innermost selves, and for some this is unfamiliar territory.

Steps 1 and 2: In some circumstances, you might consider listing more than five values. In the privacy of my home, I once listed my top twenty and then ranked them in order. I quite surprised myself, thus reinforcing the lesson that we rarely think much about what our values are. Be prepared for your own surprises if you decide to do this.

Step 11. The original IBM exercise included another pithy little feature. After writing down and ranking our top five values, we were instructed to “Write your own epitaph, stating in one or two sentences the way you would most like to be remembered after you’re gone.” Over the years I have found that including this option does not detract from the listing/ordering of values, and does tend to amplify it and enrich discussion among those who choose to enter into discussion.

IMPORTANT:  The Values Game (and epitaph, if used) is dealing with intensely private matters. Some people are more privately inclined than others. It is emphatically important that no participants feel pressured to reveal their values, or to enter into discussion, if they prefer to remain silent. Your job is to respect them and ensure nothing goes wrong.