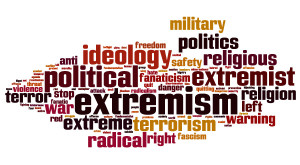 Mindsets can be extreme

Certain Muslims whose mindsets lie on the fundamentalist end of their beliefs wish to impose religious Sharia law, by force if necessary, over all nations worldwide. Many devoutly believe the Koran requires their commitment to militarily forced conversions. Such believers rule the whole of Iran and segments of most other Islamic countries. It comparably is fact that fundamentalist Jewish beliefs prevail as governing law in much of Israel, particularly on kibbutzes in occupied West Bank territories. As equal though little-noticed fact, certain deeply fundamentalist Christians openly espouse imposing Old Testament-style religious law and governance – theocracy in a word – as a replacement for democracy in American society. Look them up on the internet, see for yourself. And do read The Barbarian Conversion (Richard Fletcher, 1998) describing in some detail how true believers spread northward from Christianized Rome until, over a thousand years and by the sword, all Europe was convinced to swear fealty to the Christian religion.

All three of these Abrahamic religious mindsets avowedly would, if they could, re-institute stoning as a legal form of death penalty. In some Islamic countries they have already done so, and continue to carry out stonings – especially for women accused of adultery or “fornication” (but just the women – rarely the male partners). This yearning to live as did their ancient ancestors at the edge of prehistory is occurring in the midst of postmodern advanced civilization here in the year of our Lord two thousand something. Perhaps they should be transported to a very remote place and invited to resume hunting and gathering.

These fanatically religious mindsets avowedly would, if they could, achieve their ends by any means, any means at all – including free election through the democratic structures of government, by coup d’etat or beheadings, they don’t care how – with intent to abolish all semblance of democratic consent of the governed, separation of powers, checks and balances, and every form of civil rights. And rule by the rules of Father Abraham’s time.

Many holders of fundamentalist religious mindsets favor death – by stoning or whatever – for the “crime” of apostasy (leaving one’s religion), nor do they care in the least what your mindset may be on these matters. They believe extremely, as their harsh God demands. In case you in your innocence weren’t aware of the awful shocking reality of these things, querying the internet on “Christian theocracy” and “sharia” will provide a matter-of-fact update. Some websites name names. Go ahead, take time to check it out. Find out for yourself where some extreme mindsets would like to take us all. Since far-out extremism is only a few degrees farther out than “mere moderate” extremism, it is probably a good idea if we all possess better understanding of why the subject of mindsets is more important than we had perhaps thought about.

These religious fundamentalist forms of closed mindsets are found in all times and places. An old instance brought forth the Spanish Inquisition, later the Salem witch trials. A more recent instance brought down the twin towers of the World Trade Center. Over all eras its toll adds to hundreds of millions of innocent lives sacrificed to closed mindsets. Only slightly less out of sight and mind are the politically closed mindsets of twenty-first century neo-Nazis, still out there reading Mein Kampf, wishing yet to implement the horrendous goals of the Third Reich (have you ever read Hitler’s plan for Nazi occupation of the USA?). Counterbalancing them are the neo-Marxists who would fully restore the cold-war Union of Soviet Socialist Republics, its pseudo-communist economy and its politically totalitarian government, if they but could. Some say they’re fast learning how to do it, except now with capitalism on the economy side.

The fundamentalist mindset that condones human slavery still thrives in many parts of our world, especially North Africa, the Middle East and much of Asia where slavery is openly espoused and practiced right now, today. These things being factually so, can we really suppose the U.S. Civil War did away with all the incipient slaver mindsets in our own country? So-called white slavery controlled by sex trade pimps thrives in every major city in the U.S. today. How far away from the slaver (free labor) mindset is the corporate deep urge to pay workers the lowest possible wage they can get by with. And lest we forget, one should never assume that the petty warlords who place no value whatsoever on a human life are not alive and well everywhere today, ready and willing to reassume their grisly ancient role if opportunity presents. Mindsets.

Some years ago I witnessed an interesting juxtaposition on the evening television news in which two West Bank residents were interviewed. One was Israeli, the other Palestinian. Like early Americans dispossessing the Cherokees of their land and sending them away on the Trail of Tears, these West Bank moderns were reliving their contemporary version of Joshua leading the Children of Israel into a “promised” land known as Canaan and dispossessing its native inhabitants of homelands they had possessed beyond memory.

The Israeli woman resided in a frontier settlement that had been established in the West Bank – illegally, inasmuch as, at the time, it was unauthorized under Israeli policy and law. She argued vehemently that she and fellow settlers had a “right” to establish the settlement because, repeating her words as I recall them, “God gave this land to us, thousands of years ago. It’s already our land and always has been.” One doubts that any amount of sweet reasonable debate would change her fixed religious mindset.

The other interviewee was a young Palestinian man whose family had formerly owned and lived for generations on land now occupied by the Israeli settlement. The family had abandoned the land and fled to a nearby refugee camp in 1949 when the state of Israel was established. The young man, who had lived his entire life in the refugee camp, said he came often to this hill, from which he could look out across the valley and see his ancestral home over on the next hill – less than a mile away – as the interviewer’s camera duly panned. Decades after an event he never personally experienced, still deigning to live in the crowded, distasteful refugee camp as he had from birth, the young man’s persecuted mindset wept and raged: “There is home, right there, and I can never go back home.” Do you think time will change his fixed cultural mindset?

I recall also a National Geographic article dealing with extremely isolated Saharan desert tribesmen. These people subsist, most primitively, by herding goats in a northwestern Sahara region where conditions for sustaining life are at the raw edge. Featuring one goat herder, the article ended by recording his highest ambition – to cross over to the other side of the vast dune which separated his territory from that of another herder, kill that herder, and steal his goats. It was the loftiest life-betterment goal he could conceive.

Let us now pause to reconsider the human condition.

Every sentence you read in the following chapters will be filtered through your personal mindset(s). This is inevitable – no value judgement pertains, it simply is. However, since it is, and since one of this book’s spotlights is on the antagonism between science and religion, I urge you the reader to follow one of two options, as applicable:

Option 1) If your mindset is basically religious (i.e., influenced by one of the world’s organized religions) please try to set aside all your religious preconceptions until you have completed reading Part One . In their place, please try to imagine this: The phenomena about which you are reading describe a long, slow evolutionary unfolding, integrally incorporating randomness, that God (i.e., the one true God, the Lord of Hosts) chose, for purpose or purposes unknown and unknowable to us, to use as His Method for creating the universe and for populating it with plants and animals and bugs and bacteria as well as human bodies to serve as host temples for “souls or spiritual beings,” which is us.

Option 2) If your mindset is basically scientific and/or secular (either anti-religious or without reference to spiritual belief), please try to set aside all your anti- or non-spiritual preconceptions until you have completed reading Part Two. In their place, please try to imagine this: The phenomena about which you are reading emphasize that generally accepted parameters as to what constitutes science are too narrowly drawn to adequately accommodate well-grounded inferential hypotheses, such as the existence of dark energy and occurrence of a big bang, as well as insufficiently examined broad evidence that consciousness exists independently of the material brain; also that present parameters defining “scientific method” and “evidence” cannot sufficiently accommodate both data and reasonable findings that are clearly beyond the materialistic paradigm which demarcates, de facto, the present limits of what we call “science.”

If either of these suggestions applies for you, and if you are able to suspend your mindsets as cited, I believe you will find it worthwhile to read the rest of this book. In any case, by the time you complete Parts One and Two you will have…

…compared some new information to the original information previously stored in your memory, thereby producing an updated, perhaps revised, version of what you think about evolution, consciousness, and several other things. And, if all goes well, your updated “knowledge” will be a little different, a bit expanded and refined, perhaps more “thought about” than before. All of which will make you better prepared for reading part Three, which calls for a widening – an opening up – of both religious and scientific mindsets.

Most hopefully, the book will help all our mindsets be a bit more open than they were.