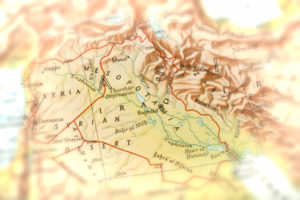 Evidence is fairly overwhelming that a massive flood of all-time proportions occurred on the recent end of pre-history and left really-long-lasting major impressions around the world, particularly in the Middle Eastern regions just east of the Mediterranean Sea. And then guess what:  11,000 years later, in 1928, British archeologist Leonard Wooley excavated the ancient city-state of Ur in Mesopotamia – modern Iraq – and found a layer of fine alluvial clay more than eight feet thick about forty feet below the present surface. A deposit of fine-grained clay this thick – and this deep – is anomalous in the extreme.

Deposited at a level far deeper than the tombs of ancient Sumerian kings, which the dig uncovered at much lesser depths, the clay contained no artifacts of any kind. This also is highly anomalous. The sterile clay discovery constituted mute and incontrovertible testimony of a massive flood capable of laying down a band of fine silt to a depth of – almost unbelievably – more than eight feet. Equally incredible, this occurred at a place where the onrush of flooding waters which had surged the length of the Mediterranean Sea still carried enormous erosive force. In this respect the clay layer at Ur provides logical contrast with the much deeper Siberia-China loess deposits laid down in a vast alluvial fan where the great tidal wave’s force was much spent and diminishing from friction after transiting the entire north Eurasian landmass from west to east.

In his deeply researched book on the flood legend, German scientist Otto Muck calculated that the flood waters which precipitated the clay deposits at Ur had to be at least twenty times the deposit depth and were potentially up to three thousand feet deep. The higher potentials for such flooding certainly would have risen to cover entire hills and low mountains in the region – and on this specifically, Gilgamesh and Noah, written several thousand years apart and both written millennia after the flood, are in complete agreement. Is it rational to offhandedly presume our ancient pre-historical ancestors just made up such dramatic stories, and orally handed them down over dozens of generations, just for the fun of it? The many versions of the flood legend, from many times and places, tell us an all-time mighty flood really did happen. If it did, then there had to be an all-time mighty cause for such a flood.

Referring to the extensive Tigris-Euphrates drainage basin wherein Ur is located, Muck describes how the extent and configuration of the great catchment area would have channeled the huge floodwaters surging eastward from the overflowing Mediterranean and down from the headwaters in Galilee, Lebanon and Syria (catchment area geography is particularly well depicted at www.thinglink.com/scene/570213211761016832):

The normal rainfall in Mesopotamia is insufficient to sustain two rivers as large as the Tigris and the Euphrates.  The water of these great rivers comes from a very large catchment area extending far beyond the region of Mesopotamia.  Conditions during the deluge were unusual only because of the amount of water involved. …a total of about 6.5 x 1012 cubic yards of water collected in the rain trench of Mesopotamia.  The floods in this area were therefore many times deeper than the average rainfall calculated at 100 feet (30 m) for the whole of Eurasia.  We can fairly say that Wooley’s discovery of the barren layer [of clay] confirms the texts of both the Biblical and the Sumerian account of the deluge.

The combined catchment area of the two great rivers of Mesopotamia covers about 308,000 square miles.  The mean length of the drainage trench is about 435 miles.  [but] The outlet of the rain trench is [only] about100 miles.  The mass of water covering the entire length of the lower reaches of the two rivers [and the great valley between], and being slowly discharged, must therefore have been about 1600 feet deep.  This agrees with the value produced by the estimate of the quantity of deposited clay.  A study of the geography of Mesopotamia removes any doubts about the accuracy of the Biblical account of the Flood.  Its language is poetic; the facts it contains are not exaggerated.

The torrents of rain which fell from the skies would not have been the normal clear-water variety. As noted earlier, the flood legend in Norse mythology speaks of “a torrent of blood” which drowned all the frost giants; Gilgamesh similarly says the people were “turned into mud.” These primitive descriptions accurately convey that the falling raindrops were literally muddy with the enormous burden of red, black, gray and brown ash and dust carried aloft over the asteroid impact site. Muck estimated that the air would have been so supersaturated with particles that every 1-1/4 cubic yards contained up to 2-1/4 pounds of solid particulates – i.e., a value so extreme that witnesses must have thought they were witnessing a rain of wet mud. Massive condensation of raindrops around such a particle-heavy mix and the resulting deluge of mud-heavy rain would have been particularly lethal to small air breathers such as birds, and this too is specified in the legends.

In modern times the question of whether a large island named Atlantis was available to be destroyed has become controversial – an embarrassment to scientists who would rather just avoid the subject than risk their reputations, an anathema to religious fundamentalists because it’s older than The Book allows for the age of the earth even as Noah’s story of a terrible, devastating flood is believed with childlike devotion. A target of much silliness, the size and location of Atlantis have been imagined everywhere on earth, from an islet fragment of an exploded volcano in the Aegean to a large continent “somewhere” in the Atlantic or Pacific. Few indeed take Plato’s retelling of the old story at face value as Plato himself did.

Doing so leads the seeker to a strangely near-circular scar on the Atlantic floor just east of the mid-Atlantic rift, at a location west and a bit south of Gibraltar, along the edge of which rises a small cluster of volcanic mountain peaks today known as the Azores Islands. Plato’s story doesn’t call Atlantis a “continent,” it speaks of a large island. The circular scar is roughly twice as big as Ireland – a nice “large” island which contains a great many square miles and a great many people – hence there is no inherent wrongness in speaking of an Atlantean “civilization.”

To contain this subject in proper proportion, I have mentioned only the most prominent evidence that the big island truly existed, and was destroyed. There is much more, by many credible researchers and writers, and it makes for interesting reading. For example:  under the label “Two Thousand Years of Darkness,” Muck spends an entire chapter associating the long centuries of densely-clouded European darkness following the catastrophe to the otherwise unexplainably rapid change in European survivors to “Caucasian” white skin and features from the black-to-dark skin and features with which all their ancestors arrived as immigrants from Africa. A ton of further detail is available to any reader seriously interested in deciding for him/herself the believability of the two legends – Atlantis and The Flood. I strongly recommend the reading begin with Otto Muck’s science-based book cited above, and proceed with caution. Amateur claims on Atlantean “facts” are innumerable, but discernment in separating wheat from chaff develops quickly.

But why, the reader may ask, have we paused so long here to explore what, admittedly, are “just” unprovable legends, given that our stated purpose in this book is to explore mindsets. And the answer is that familiarity with the Atlantis and Great Flood legends are essential informative context for moving from humanity’s prehistory into historical times, because the former greatly influenced the latter. Moreover, closed mindsets clearly are a permanent part of the human condition. They have been with us – a built-in sort of self influencing impairment – from the beginning, way back in prehistory.

The long-range development of humankind encountered many kinds of influences which were shaping our civilizations and our psychologies well before the recent millennia which got recorded in writing. Our true history did not begin by some coincidence just at the time when we happened to invent writing some five to six thousand years ago. Much, much more happened before that to leave lasting influences on what would later become our written history. None of those old events were written down when they were fresh news. Just as we studied “long” evolution (cosmos and life) for two chapters in order to prepare our perspectives for “fast” evolution, we must understand this prehistory-history transition in order to prepare ourselves for the even faster evolution which will shortly be upon us. Perspective is everything if you really want to understand what’s going on.