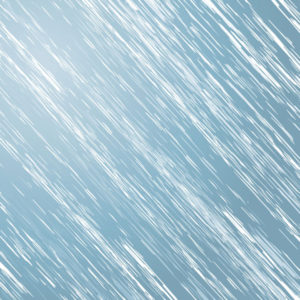 Insult atop injury, there followed in short order the onset of torrential rains, an extended downpouring in magnitudes and intensity never before seen by the people who had survived the tidal wave, or by their fathers and mothers. Like the tidal-wave flood, the massive new flooding arose quickly; unlike the racing tidal wave, it stayed around for an extended time. This second punch of the great flood, and the great rains which produced it, were unprecedented in human experience.

The enormous black cloud arising from the asteroid strike carried within it millions of tons of volcanic ash, along with uncountable volumes of light sand-sized particles from the demolished island and salt crystals from evaporated sea water – all blown sky high in a tumult lasting for days. Comparably vast quantities of moisture were carried aloft in the form of steam produced by the contact of released magma with ocean water. All drifting eastward with the upper winds, the combination of rapidly cooling steam and microscopic particulate matter comprised ideal conditions for condensation of raindrops. And condense they did, in quantities seldom seen since the earth was much younger.

Northern reaches of the big black-ink clouds were blown northeastward across the land that would someday be called Europe, while their southern edges were captured by the trade winds and carried westward to the Americas. Thus one of the biggest cyclonic rotations in the history of the world brought sustained torrential rains everywhere the great black clouds went. The resulting rains started and did not stop. Magma kept pouring up into the ocean from that sensitive fracture seam in the middle of the Atlantic Ocean, and the steam kept rising. Great fractions of the volcanic ash continued breaching the ocean surface and rising on the winds, forming fresh conditions for formation of yet more rains. It went on, and on, especially across Europe and the Middle East, those nearby places where the legends of a great flood arose most emphatically – and most lastingly endured “from time immemorial,” nearly eleven thousand years ago – down to the present day. The Great Deluge. Noah’s Flood. No doubt you’ve heard of it.

If old legends of a devastating flood are widespread among native peoples worldwide, the Fertile Crescent and nearby areas of the Middle East are positively thick with them. The best preserved, already long mythical when they were written down, were among the first stories to be recorded in a number of the world’s oldest examples of written language – an indication of their priority among human myth. Eridu Genesis, for example, comes from ancient Sumer (third millennium BCE). From Babylonia come the flood legends of Atrahasis (circa 1640 BCE); the fairly complete Epic of Gilgamesh (c. 1100 BCE); and Berossus (278 BCE). The Greeks handed down flood legends from Ovid, Hyginus and Apollodorus (700 BCE to first century CE). Biblical Old Testament writings, including the ancient (and most well known) flood legend in Genesis, originated between approximately 1000 to 500 BCE. The Quran (c. 600 CE) contains two flood versions.

Regardless the dates when these story sources originated, all very explicitly tell of a great flood in very distant ancient times, long before writing began. All contain some or all of a dozen story elements, though none contains quite precisely the same elements as any other – the dozen elements being:  a revolt; a hero; a country; a destroyer; a warning; a reason; a cause; a savior; a period of rain; purposeful birds; a destination, a fate. You can easily make interesting comparisons of the several versions, available in scholarly sources all cited online.

The old, old Epic of Gilgamesh, for example, describes torrential rains for “six days and seven nights” and says “the deluge overthrew the land.” Written in poetic form by some ancient history-keeper, several segments are reasonably interpreted as reporting by ancient peoples on their ancestors’ experience of a distant asteroid strike somewhere beyond their horizon, shortly followed by great flooding:

I watched the appearance of the weather: the weather was frightful to behold! Just as dawn began to glow there arose from the horizon a black cloud. … The gods lifted up the torches, setting the land ablaze with their flare. … overtook the heavens, and turned to blackness all that had been light. … All day long the South Wind blew, blowing fast – and then the flood came, overwhelming the people like an attack. No one could see his fellow, they could not recognize each other in the torrent. Six days and seven nights came the wind and flood, the storm flattening the land. When the seventh day arrived, the storm was pounding. … the sea, calmed; the whirlwind fell still; the flood stopped.  I looked around all day long – quiet had set in and all the human beings had turned to clay! The terrain was as flat as a roof.  [emphases added]

Shall we judge the writer as speaking allegorically or literally about “setting the land ablaze with their flare,” when logic assures that a large asteroid strike would have done precisely that and would moreover have been visible for hundreds of miles in all directions? Comparably, “…turned to blackness all that had been light” is consistent with the enormous volcanic smoke and ash cloud fast which would have rapidly spread eastward from the strike. “…and then the Flood came, overwhelming the people like an attack” is consistent with the resulting tidal wave. “No one could see his fellow, they could not recognize each other in the torrent” is consistent with the torrential rains which followed on the heels of the tidal wave. And “all the human beings had turned to clay! The terrain was as flat as a roof” logically describes the copious mud transported and deposited across hundreds of thousands of square miles after the flooding at last receded and the earth surface was exposed once more.

As interesting as we find Gilgamesh, but there’s no contesting the fact that the Biblical Genesis version is by far the best known flood story in the west, especially in the USA. Let us therefore consider, compare and contrast what it says.

The Old Testament book of Genesis uses terms comparable to those in Gilgamesh, and contains the same elements cited, but presents more detail surrounding the flood itself. These excerpts are quoted from The New English Bible edition, chapters 6-9:

[The Lord] said, ‘This race of men whom I have created, I will wipe them off the face of the earth… I am sorry that I ever made them.’ … [and said to Noah] ‘I intend to bring the waters of the flood over the earth to destroy every human being under heaven that has the spirit of life; everything on earth shall perish. … and you shall bring living creatures of every kind into the ark to keep them alive with you, two of each kind, a male and a female … See that you take and store every kind of food that can be eaten, this shall be food for you and them … Take with you seven pairs, male and female, of all beasts that are ritually clean; and one pair, male and female, of all beasts that are not clean; also seven pairs, male and female, of every bird – to ensure that life continues on earth. … I will send rain over the earth for forty days and forty nights…’

‘In the year when Noah was six hundred years old, on the seventeenth day of the second month, on that very day, all the springs of the great abyss broke through, the windows of the sky were opened, and rain fell on the earth for forty days and forty nights.’ [emphases added]

As in Gilgamesh where “the Flood came, overwhelming the poeple like an attack,” it is reasonable to interpret “springs of the great abyss broke through” as referring to a tidal wave breaking out of the ocean’s deep abyss. The remaining words in Genesis, “the windows of the sky were opened, and rain fell on the earth for forty days and forty nights,” specify extended torrential rains equivalent to Gilgamesh’s “No one could see his fellow, they could not recognize each other in the torrent.”

Genesis is more descriptive yet:

‘More and more the waters increased over the earth until they covered all the high mountains everywhere under heaven. The waters increased and the mountains were covered to a depth of fifteen cubits’ [a cubit was the distance from the elbow to the tip of the longest finger, or about one and a half feet] … When the waters had increased over the earth for a hundred and fifty days…the waters began to subside. The springs of the abyss were stopped up, and so were the windows of the sky; the downpour from the skies was checked. The water gradually receded from the earth, and by the end of a hundred and fifty days it had disappeared.’

Temporal details differ but the story boards are the same. The Genesis legend is telling us – with no doubt some hint of accuracy – that the down-pouring rains lasted “nearly a month and a half” (i.e., a long time), after which the flooding was so deep that “another five months” (i.e., an even longer time) elapsed before the floodwaters fully receded. Considered in scientific perspective, several weeks of torrential rain is credible and consistent with the enormous, long lasting particle-laden clouds which would be generated by a six-mile-wide asteroid striking close beside the fragile center rift of the Atlantic Ocean basin.

It is worse than pointless to reject the legend on mere grounds that a Judeo-Christian religious tradition has been the vehicle by which it coincidentally was carried down to us. Ample evidence of such strike is there to be found if one bothers to seek it with scientific discipline. Numerous other traditions have carried down this same ancient legend in mutually consistent forms from a time when credulous, magical, human perspectives made no distinction between religious and not-religious – all-powerful gods were everywhere “obvious” and taken for granted. In any case, almost all legends sooner or later get expropriated by one or another religion, a familiar example being Christianity’s routine expropriating ancient winter solstice celebrations and renaming them Christ-mass everywhere its domain expanded.

It doesn’t really matter whether the world’s dozens of great flood legends, with or without embellishments, are told by Noah, or by Utnapishtim, or for that matter by Old Turtle. The fairly inevitable expropriation of the flood legend by religion, along with science’s out-of-hand rejection of the legend because of its religious associations, mutually exemplify the types of closed mindsets this book seeks to spotlight – perchance, against all odds, to pry open a crack. Here, as in most other quarters if you bother to look, there be mindsets tightly clamped and sufficient to go around.