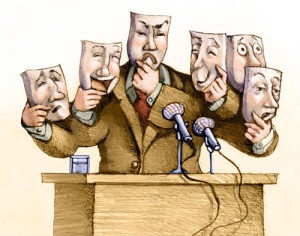 Karlos             Does your wife ever use birth control? I mean like contraceptives?

Chuckie          Karlos, I think I see where you’re going. Innocensio, if I told you that CIC – which pays your salary – CIC likes a political candidate who is against abortion, and who might be persuaded to raise the minimum wage, would you vote for that candidate?

Innocensio           Why probably yes sir. Ain’t no hope now, is there sir? I’ll vote for a wino dog catcher if he promises to raise the minimum wage.  Sir.

Karlos             And if he promises to abolish the law that allows abortion, will you ask your wife to vote for him too?

Karlos             Now Innocensio, as it happens, there is such a candidate. His name is Rodriguez. You can certainly remember that name. The election is only a few weeks away. Rodriguez is a member of the Corporation Party. He’s a friend of mine. He’s a friend of CIC. And he intends to abolish the law that allows abortions. If I tell Rodriguez how you feel about the minimum wage, will you and your wife vote for him?

Chuckie          Good man, Innocensio! I know just how you feel. Rodriguez has promised to pass some laws that will please me too! He’d better, after all the support I gave him.

Karlos             Cool it.  Innocensio, how many relatives do you have who are old enough to vote in the next election?

Innocensio          Yes sir. I have my grandfather’s old Springfield. Used it in the Spanish Civil War, he did. My brother has a nice 410 shotgun — good for squirrels you know. And then my cousin Luigi… well, I’d better not say about Luigi…

Karlos             Real men keep guns. Innocensio, did you know that the candidate of the other party, the one who’s running against Rodriguez – he says if he gets elected he’s going to pass a law to take away people’s guns – did you know that?

Karlos             Well, pass a law regulating when and where you can shoot a gun – can’t even drive by a school with a gun showing – you know, same thing as taking them away.

Innocensio             I wouldn’t want them to take away my grandfather’s Springfield, sir.

Chuckie          Better vote for the Corporation Party, then. It’s the only party left that still stands up to defend your God-given rights.

Chuckie          Innocensio are there any people in your family – adults, I mean, voting adults – who dislike people burning the American flag? Or not taking a loyalty oath?

Innocensio               Sir, my family is all over the map — not to mention all my wife’s relatives.  We have someone who is for or against anything you might care to name.  Sir.

Karlos             How would your wife take it then if our good guy – Rodriguez – passes a law making it legal to pray in school every morning? To start all public meetings with a prayer to Almighty God? Put up the Ten Commandments in every courthouse yard?

Chuckie          Tell your wife about Rodriguez. Don’t forget, he’s the man who can probably be persuaded to consider an increase in the minimum wage.

Karlos             That’s true. I can personally promise you, Rodriguez will consider increasing the minimum wage.  IF he’s elected.  Won’t happen if he’s not elected.

Chuckie          Tell all your relatives. How do they feel about gay rights? I mean lesbians, and boys who like boys, all getting married, and agitating for civil rights, and all that?

Innocensio             Well, my wife’s  cousin Emilio, he is a little bit gay, but he is a very nice guy and all the children love him and…   I have to admit, though, he and Squarcio will not go to the same family gathering if either one knows the other will be there. So sad…

Chuckie          Tell them both to vote for your interests. Tell your whole family to vote for Rodriguez – the candidate who’s willing to consider a minimum wage increase.

Karlos             Rodriguez promised me Hell will freeze over before he votes to increase the damn minimum wage. He’d like to reduce the damn thing. Eliminate it maybe.

Chuckie          So would I!  I multiplied it out. If you let a minimum wage employee work forty hours a week – which I don’t – do you know how much that would cost in wages paid out over a whole year?

Chuckie          More than fifteen thousand dollars! And that’s not counting the Social Security and all that fringe benefit crap!

Chuckie          All right. I’ll see that some coins quietly find their way to his campaign.

Karlos             Listen, if you want to make sure Rodriguez beats out that pinko populist running against him, you’d better make sure those coins add up to a million.

Karlos             Think of it as investment. Look at the down side. How much would a two-dollar minimum wage increase cost you across every corporation you own?

Chuckie          Just here? In the United States alone?  Jee-zuss.    …Say Karlos, I didn’t know you cared one way or the other about all those issues. What was it – guns? Abortion? Gay rights for chrissake?

Chuckie          You don’t?!…  But you just spent ten minutes talking a guy into getting his whole tribe to vote for your man, based on those very issues!

Karlos             Consider the odds. You can be absolutely certain that various voting members of his overpopulated family care passionately about some of those issues. And they will vote for Rodriguez because those are the hot-button issues he’s pressing on.

Karlos             Took you long enough. At the heart of things, Rodriguez is a corporation man who likes profits and hates regulations. He says whatever is needed to get the votes.

Chuckie          Glad to hear he fits in so well on our side. But now you’ve got me curious, Karlos. What do you yourself care about?

Karlos             Getting my Corporation Party candidates elected. That’s all I care about.

Chuckie          Hoho, I DO SEE. You divert them. You make voters focus on secondary issues. Side issues.  Distractions.  And when they go vote for these hot buttons – these distractions they get so stirred up about – you’re really getting them to vote for…

Karlos             …my candidates. And my candidates serve my interest, and my only real interest is corporate control of the US economy. So the more votes we control, the better.

Karlos             Works every time, if you put enough distractions out there. In only two decades we have pulled over half of all blue-collar white voters into our camp. Especially the ones who are mad over being poorer than their parents. That’s a huge shift. They get really hot over little side issue shit like religion. Anything religious really stirs’em up, anything at all – it’s just amazing.  Plus, they’re afraid immigrants will take over their jobs – like Innocensio there, foreigners willing to work for peanuts. Throw in a little appeal to homophobia – or anything else that divides them – and their vote is yours.

Karlos             Easier, actually. We just appeal to whatever makes’em mad and they vote for whoever we want them to. They’re really not too bright when it comes to noticing that the only real issue is money. What do these dummies know about economics? They’ll shoot their own foot every time, trust me. It works anywhere. Look at Egypt. Voters there, in their first free election in forty years, voted in a guy who openly opposed any more free elections. The Egyptian dummies were distracted.  It proves my point.

Karlos             Pretty much. Count up the state elections my party has won. Look how many state legislatures the Corporation Party controls, right now, today. We’ve got the winning combination. In slow motion we’re taking over, and we’re bygod running things our way. The biggest for-profit enterprise in the history of the world:  America Inc.

Chuckie          Karlos…  you don’t head up any corporations like I do. You’re just a political wonk. It can’t be money, so what is your reward when the votes are all counted?

Karlos             You can’t have your way unless you have power. To have it, you’ve got to get enough of your people elected to take control of Congress. Control both houses of Congress and the Presidency – ha – then the sky’s the limit. There is no limit.

Karlos             It’s enough. I’m not like those insatiable greedy bastards they talk about.

Chuckie          Well it hasn’t kept my quarterly increases from slowing down. It seems like there’s more big dogs in the game these days, nipping at my heels.

Karlos             No doubt there are, and no doubt they’re nipping at your heels. That’s capitalism. That’s the game. But give it time. Put a little one-mil investment on every Corporation Party candidate I tell you to – maybe occasionally two mil on a real important race – and I guarantee the things you want will come to you.

(Royalty free with three easy conditions: 1) give the author credit, 2) tell him you are producing his play (contact by COMMENT on the blog), 3) and refer your audience to his blog at fixypopulist.com )