Help Others or Serve Yourself? 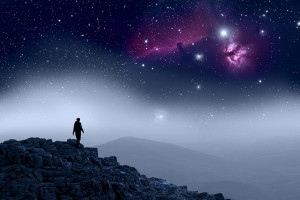 It is of some interest that the earth ecology and human social milieu within which we live and experience our daily being can be likened increasingly to a “maelstrom,” an old Dutch term connoting a great whirlpool of extraordinary size and probable violence, a grave danger to any mere humans caught in its mighty force. Some have blamed the exponentially accelerating pace of change we have brought on ourselves for a great variety of modern social ills from culture shock to terrorism, though these almost certainly are but symptoms of deeper causes unrecognized.

If our great-grandparents were dropped into our modern world it would seem so alien they might well wonder if they’d moved to a different planet. It is in any case absolutely certain that our modern maelstrom of runaway change is unprecedented in the history of humanity’s sojourn upon the earth and fundamentally involves those widely unrecognized causes. One such force, which has not so far received much overt attention, is the human mental condition called a mindset. Our great-grandparents would have recognized it well.

Also of interest, the ever-accelerating maelstrom we have generated – even after half a century of it – is still little recognized or acknowledged by much of ordinary humanity regardless of their stations high or low, educated or not.  Most people or all ranks and situations simply live from day to day, doing whatever they do to get by, hopefully to prosper a bit, seldom looking farther back than last week, almost never to that non-time before their own lifetime – even more seldom thinking more than a week or two ahead and most certainly not two or three irrelevant centuries ahead.

Except for a few professional historians and a much smaller number of futurists, this unnoticed boundary around temporal perspective – self imposed by default – is manifest by street sweepers and Congressmen, learned physicists and the cooks at McDonald’s – and just about everybody else alive today.

The reason most of these good folk don’t realize we live in interesting times is that they haven’t thought about it. And why would they? Most are necessarily focused on earning a living, on getting married, trading cars, raising kids, hoping for a decent retirement, on simply getting by. While thus attending to everything which must be properly attended to get by in life, there’s really not a lot of reason for thinking about the far past or distant future, much less what these might tell us about the present.

Every major arena of human interest  – science, religion, economics, politics and more – is deeply involved in the maelstrom which makes these interesting times interesting. Consider, for example, global warming – a topic we may say falls generally in the arena of science even though it actually affects everything else, absolutely everything. Over four decades now a growing number of people have been reading popular snippets of the unfolding scientific news about the heating-up of earth’s atmosphere. All the while this very credible news has grown steadily worse, and goes something like this.

Our human industrial revolution which first appeared on the earth and unfolded over the past three hundred years, and our present “way of life” which that industry has made possible, have been and still are daily dumping so much carbon dioxide into the earth’s atmosphere that a resulting “greenhouse effect” is trapping the sun’s heat, making the entire world warmer. Carbon dioxide pollution is holding that heat close to the earth instead of letting it radiate back out into space as it more normally would. In consequence of this abnormal extra heat, building up to ever higher temperatures, the world’s glaciers and polar icecaps are melting.

Their melting, though slow in comparison to a human lifetime, is extremely fast geologically speaking. And it is inevitable – it is happening now, this very minute, and is of great consequence for the human future. We are years beyond the point when it might have been stopped. This abnormal warming of the earth cannot now be stopped, and even if we could stop the polluting tomorrow a natural lag time would worsen the problem for years before it turned, at long last reversed. Each and every day we still burn enormous amounts of the coal, oil and natural gas which release the carbon dioxide into the air, compounding the magnitude of problem and its duration into the future.

Unless something stops the rise of global temperature – which rise, you should know, is accelerating exponentially – all that melting ice, collectively the size of a continent, will drain so very much melted water into the world’s oceans that the ocean levels will rise at least several feet and quite possibly a great many yards everywhere around the earth. The rising seawater will submerge existing coastlines and coastal cities, thereby displacing literally billions of human beings. Approximately half the world’s seven (plus) billion people live within a hundred miles of a coastline, and rising sea levels will force many of them to move inland, often as refugees. To say this displacement of several billion people will cause some disruption among those who already live inland is putting it mildly.

Rising seas aren’t the only worrisome consequence. As the tropical zones move toward the poles, tropical insects and diseases are moving with them. Malaria may become commonplace in Chicago. A major concern to the few who are aware of it is that warming of the sub-polar zones is already beginning to release carbon dioxide from the northern permafrost where truly titanic quantities of it have been locked away for millennia. Many plants and animals, adapted to cooler temperatures, will simply go extinct because they won’t be able to adapt to the fast-spreading warmth. The invaluable diversity they represent will be lost. Agricultural growing zones are being degraded, making it harder to raise the same crops people have come to expect, to depend on, from exhausted soils under a hotter sky. Making more fertilizer to spread on them most unfortunately releases huge additional amounts of carbon dioxide. Abnormal heating is causing the world’s ocean currents to change their age-old patterns, negatively affecting the world’s fish upon which much of humanity depend for food. The  list goes on.

Now here’s the thing. Almost everyone alive on earth today has heard about global warming. Of those who’ve heard about it, something like a majority, perhaps a very large majority, accept that it is true. They believe global warming is happening, just as the scientists say. And they believe those awful consequences they’ve heard about will in fact happen unless we – the whole human species, or the leaders who presume to act in our name – do something to stop the buildup of carbon dioxide pollution in our atmosphere.

But there are others who aren’t convinced it’s true. They’ve heard skeptical people on radio and TV say global warming may not really be happening, and if they’re on radio or TV they must be “somebody” – presumably authorities – right? Unaccustomed to thinking on their own about unfamiliar topics, dependent on hearing others say what’s true, they’re not sure what to believe. Then there’s another relative few who are absolutely certain global warming is not real, not happening, that all those scientific reports are untrue, that the scientists who put out those bogus reports are self serving hypocrites who do so only in hopes of getting government research grants.

Among these doubters who are so certain that global warming is not real, a surprisingly large number are members of the United States Congress – and virtually all of these receive reelection campaign donations – quite large donations – from the giant corporations which make their giant wealth from selling the oil, coal and gas which put the carbon dioxide into the atmosphere. These Congressmen have, one might say, a conflict of interest. Nonetheless, they make the laws which govern We The People of the United States of America and they wield great power by virtue of their membership in that Great Power Club we call Congress.

These doubters have a “mindset.” Self-convinced that global warming is not real, they act accordingly by opposing measures which would reduce the release of carbon dioxide into the atmosphere from burning fossil fuels. If their mindsets happen to be wrong, their contrarian opposition to U.S. environmental laws and regulations is putting at risk the very lives of the rest of us, and – needless to say – our children and especially our grandchildren who will live to face the real, very physical consequences of global overheating, now quite well known and predicted. Rising seas; massive tornados and hurricanes of unprecedented violence; unprecedentedly vast floods; unprecedented droughts; unprecedented desertification; spreading loss of the once-fertile soils we depend on to grow our food.

Thus we encounter mindset, and the consequences which can result from it.

Mindsets occur in every sphere of human interest. In religion, for example, a great many believers in one religion or another do whatever their particular religion calls for – such as going to church on Sundays, joining in singing and prayer, extolling the kingship of God as creator of the universe and humanity within it, and being comfortably part of the community of their congregation. Many people are content at this level of involvement.

Some of their peers, however, are not so content. Their deep discontent is exemplified by Islamic and Christian true believers who take most seriously their perceived mandates to go forth unto all the world and convert the heathen non-believers to, respectively, Islam or Christianity as their missionary drive may happen to believe. To fail to so convert others they regard as a sin of omission which might put their own souls at risk of eternal punishment in the torment of hellfire. Not a few of these believe – and believe zealously – that “science” is the work of a devil – Satan – who is intent on kidnapping everyone’s soul and rejoicing over its eternal torment in his unholy fires.

And so they appear at your door most inconveniently with their pamphlets and their earnest intent to save your soul so as to improve their own standing with God. Among these, an extreme few take their perceived Christian responsibility for implementing their understanding of God’s Will so terribly serious that they willingly hide in the bushes until opportunity permits them to fire bullets through a rifle at a doctor or nurse who works in a clinic performing abortions, with righteous holy full intent to murder this evil clinician who, they believe, is murdering fetuses. The Islamic version is to self destruct with a suicide bomb in a crowded happy marketplace on a bright sunny morning.

Thus we encounter more degrees of mindset, and the consequences thereof.

Among all these religious persons, a relative few are trained scientists. Among their scientific peers, these scientists-with-religion represent an anomalous subset who, most unscientifically, are inclined to hold religious beliefs of one sort or another. Being scientists and thus predisposed to question all things, church doctrines not excluded, many continue to attend religious services because they have concluded that a master creator, popularly called God, logically must exist and must have created us, most likely through natural evolution, for indeed here we are, existing. Most religious scientists conclude some personal version of this even though they privately don’t much care about the doctrines or dogmas of the particular religious institution they happen to attend.