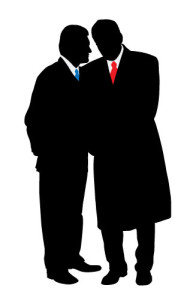 Karlos, a strategist for the Corporation Party   (wears a suit)

Innocensio Du’mass, a poor worker of French-Italian lineage (no suit)

Chuckie          Good day yourself, Karlos. My fortune fares poorly. Not well at all. The Dow is off and my quarterly increases have slowed way down. That’s why I hired you to advise me. So advise me.

Chuckie          The damn government. It has all these…regulations. They get in the way of honest profit.

Chuckie          How! With business interests as broad as mine, regulations are like fruit flies. They pop up everywhere. They interfere with everything I want to do.

Chuckie          Get rid of the enforcers? How? They have tenure, or civil rights or Civil Service rights, whatever in hell it’s called. That still leaves the damn regulations in place.

Karlos             Regulations have no meaning if no one’s enforcing them. There are two ways to get around regulations. One, you castrate the enforcers by shrinking their budget so hard they have no choice but to cut staff. You know how to do that don’t you?

Chuckie          Sure! I kick out at least half the workies in every corporation I take over. Twice a month on average. Just on principle. But these regulators are doing what they do because Congress told them to. How can I cut budget on people who don’t work for me?

Karlos             I’m coming to that. The other way is to replace the bosses who supervise the underlings who enforce the regulations.

Chuckie          They don’t work for me either. Anyway, aren’t the top bureaucrats just as entrenched as the underling bureaucrats?

Karlos             Emphatically not! The top dogs are appointed. The underlings merely get their little jobs by taking a test to prove they have personal merit. You see the difference.

Karlos             The usual stuff. They must have got a college degree of some kind, got trained, know their shit about whatever they work at. Show some integrity. See?

Chuckie            So what about these bosses who make the policies and do the supervising?  Who appoints them? Do they get their jobs on merit too?

Chuckie          Explain please. How can I, head of all these corporations, appoint the top managers who supervise the daily work of these ubiquitous little government bureaucrats who are absolutely everywhere I try to turn a buck, telling me I can’t do this or that! As soon as my new appointees get in place you can bet I’m going to reverse some damn policies. Not to mention cutting some damn budgets and damn jobs.

Chuckie          You think I can’t play the law game? How do you think I got to be one of the world’s richest men? Just tell me how to appoint my own government managers.

Karlos                  That’s the ones. Trust me, if you want to get rid of regulations that are holding back your profit increases — costing you money, I mean — you have got to have friends in Congress. Especially friends who are members of the Corporation Party.

Karlos             One thing at a time, Chuckie. Let’s lay the whole thing out. Who enforces those regulations you so despise?

Chuckie          Lowly little government bean counters who have no real work to do.

Karlos             No, you’ve gotta make sure the President who gets elected will appoint managers who will cut budgets and tell their regulation enforcers to do something else.

Chuckie          What’s that got to do with Congress? You mentioned Congress.

Chuckie          Well that’s a quickie. Let’s abolish all the damn laws we can. Less law is more freedom. I hate speed limit signs. I really hate stop signs. Zoning laws give me gas.

Karlos             Now you’re cooking. In this great nation, one political party – and only one party – is deeply focused on getting government regulations off the backs of free corporations so the invisible hand can generate real profits freely pursued in a free market. And you know which party that is.

Karlos             If you want your corporate interests – your interests – put at the front of the line – ahead of all those welfare leeches and health nuts and pinkos – you’ve got to help us – the Corporation Party, I mean – get more of our people elected to Congress. Got that? We have got to fill Congress with our people. Fill it up. We’ve also got to get our man elected President. That’s very important. It’s a hell of a lot easier to kill nuisance laws and regulations if your own people control both Congress and the Whitehouse.

Karlos             Political campaigns. You have to invest money to make more money.

Karlos             Yes. We need more voters out there voting for the Corporation Party.

Chuckie          Sounds like herding cats. How do you make them vote the way we want them to? It’s a free country.

Karlos             They all watch TV. They listen to radio talkheads while they commute. We need to flood prime time with political ads that persuade people to vote our way on issues deeply important to the future of the republic. Like getting rid of regulations.

Chuckie          Your average employee doesn’t know squat about regulations, or give a damn who makes them or enforces them. I know how dumb these people are – a lot of them work in my corporations. I lay off a lot of them, I keep some. All the same. Dumb.

Karlos             Right! We rely on that! We count on it. That’s why our political ads don’t mention regulations, they talk about other stuff.

Karlos             Stuff the common people care about. Stuff that gets them so riled up they’ll go out and vote the way we want them to.

Chuckie          I don’t get it. What has that got to do with abolishing regulations?

Chuckie          You’re confusing me! If you want to abolish laws and kill regulations, why are you preaching to voters about religion and… and, what was it.. .gay rights?  Ye gods, man – how can these diversions make them vote for the Corporation Party?

Karlos             Well speak of diversions! Here comes Innocensio. Would you like a living demonstration of what I’m trying to explain?

Chuckie          I’d like anything that will free up my inroads into the free market.

Chuckie          Pleased to meet you Innocensio. How do you come by your Italian name?

Innocensio      My mother lived in the northwest of Italy. My father lived in the southeast of France. They got together. These things happen. Then they came here to America, the land of the free. I was born on the way over.

Innocensio       Oh yes that I do sir. I’ve been there fourteen years sir.

Innocensio      Oh yes sir, we’re trying really hard to keep up with all the imports, sir.

Innocensio          Yes sir, indeed there was sir. I’m one of the few still working there sir.

(copyrighted but royalty free to all – see use conditions at top)